Welcome all to the Daily Dose of Strixhaven. Today I’m going to be focusing on the Golgari College of Witherbloom and some pesky Pests. That’s right, I have three new Witherbloom cards ready to cause you to decay in fear from its gruesomeness thanks to Pests. Golgari has always been known for its dark side and Witherbloom as a college represents that very well. Part of that is with the new Pest Token. Each Pest token is a 1/1 Black and Green creature with “When this creature dies, gain 1 life”. This might not seem like much life gain, but it adds up and they can truly become Pests. In the end, I’ll talk about a new Demon that hopes you have plenty of Pests to sacrifice.

Now we want a creature that can continually make some Pests and we have one in Sedgemoor Witch. 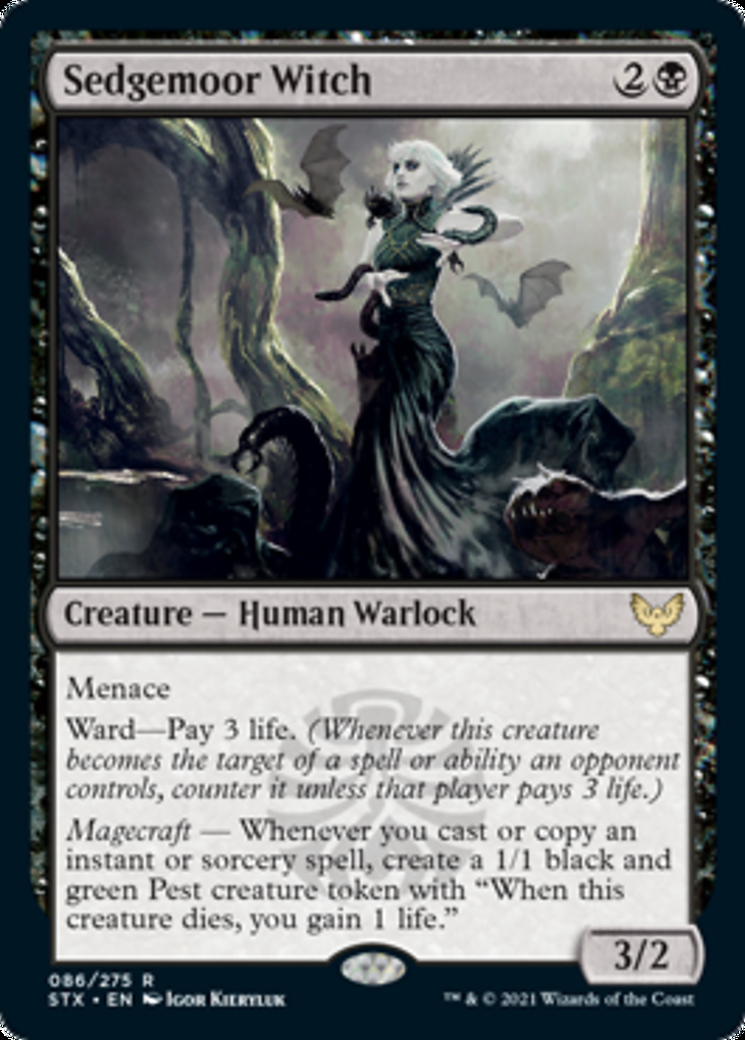 To start off you get a 3/2 menace creature for only three mana and that’s some strong stats. Menace adds a level of evasion that will make it hard for your opponent to block, especially earlier in the game. Next up it has a Ward payment of three life. That’s no cheap Ward cost for your opponent. Even if they can target, you’ve made them lose three life in the process. The best part though is that it can make a bunch of Pests. Thanks to its Magecraft trigger you'll start creating Pest tokens with each instant or sorcery spell you cast or copy. Those 1/1’s will start to flood the battlefield and can be used for whatever sacrificing you need.

Here is a Vampire that can either help you create more Pests or deal with some things usually reserved for sideboard hate. Here is Callous Bloodmage. 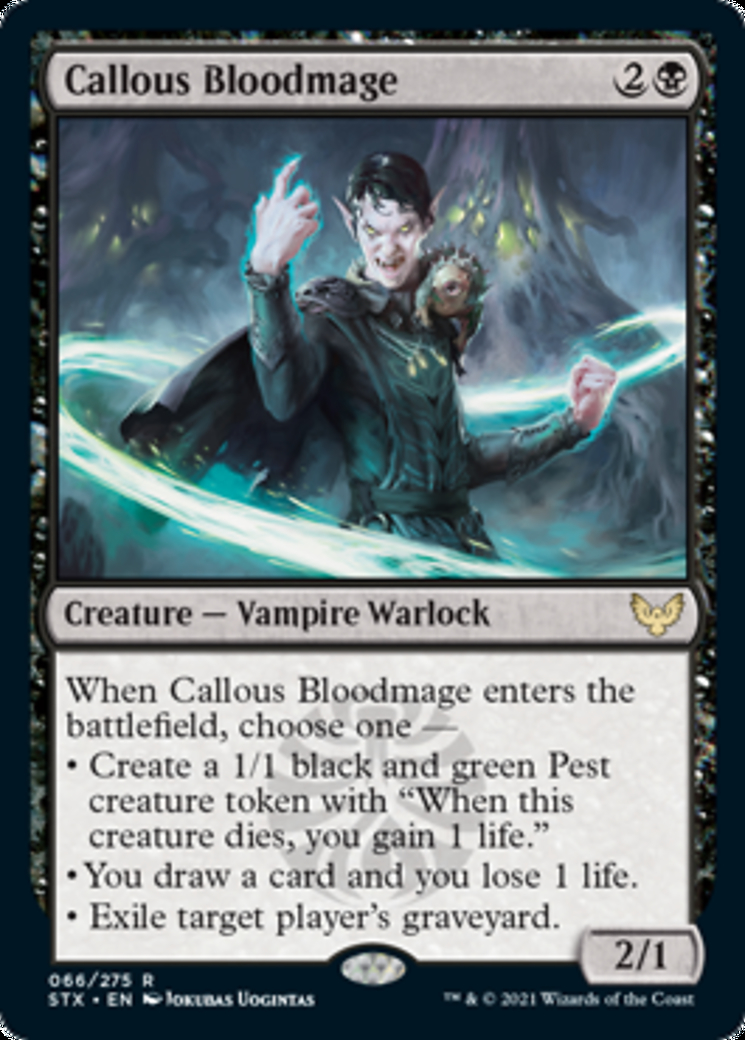 I love modal cards that give you choices and flexibility based on how a game is progressing. You get a 2/1 creature for three mana which isn’t great, but there are three ways to upgrade the value for this card. First off you can make a Pest token which adds extra power to the board and is a great sacrifice target. It'll also help you gain life, which triggers a few abilities with Strixhaven cards. Another solid option is always drawing a card. Replacing the spell you cast is always beneficial even if you're left with just a 2/1. Cantrips of any kind, especially those on creatures are powerful. Finally, you can exile your opponents’ graveyard which can be important in certain matchups.

Next up is a modal DFC that is part Pest, part resource value train. Here is Blex, Vexing Pest // Search for Blex.

Now, this is a lord of all things slimy and grimy. When it comes to the creatures that it grants +1/+1, first on the list are all those Pests you’ve been creating. When it comes to Bats, Dirge Bat is the best currently in Standard. Insects, there are a few more to deal with, but the best overall of the bunch is Luminous Broodmoth. When it comes to Snakes you have Stonecoil Serpent and Lotus Cobra leading the charge. There are quite a few Spiders going around with Chainweb Aracnir and Sporeweb Weaver leading the way.

There's still the flip side of this modal DFC, Search for Blex. This is an interesting card draw spell in that it gives you both card selection and advantage at the cost of life. With all those Pests helping you gain life, you can probably afford to pay six life to get the best two cards out of the top five. Don’t forget that all the remaining cards go to your graveyard for you to use as a resource.

Finally, I have a creature that really wants you to have some creatures around to sacrifice. Hey, those Pests would be perfect for this. Here is Daemogoth Titan. 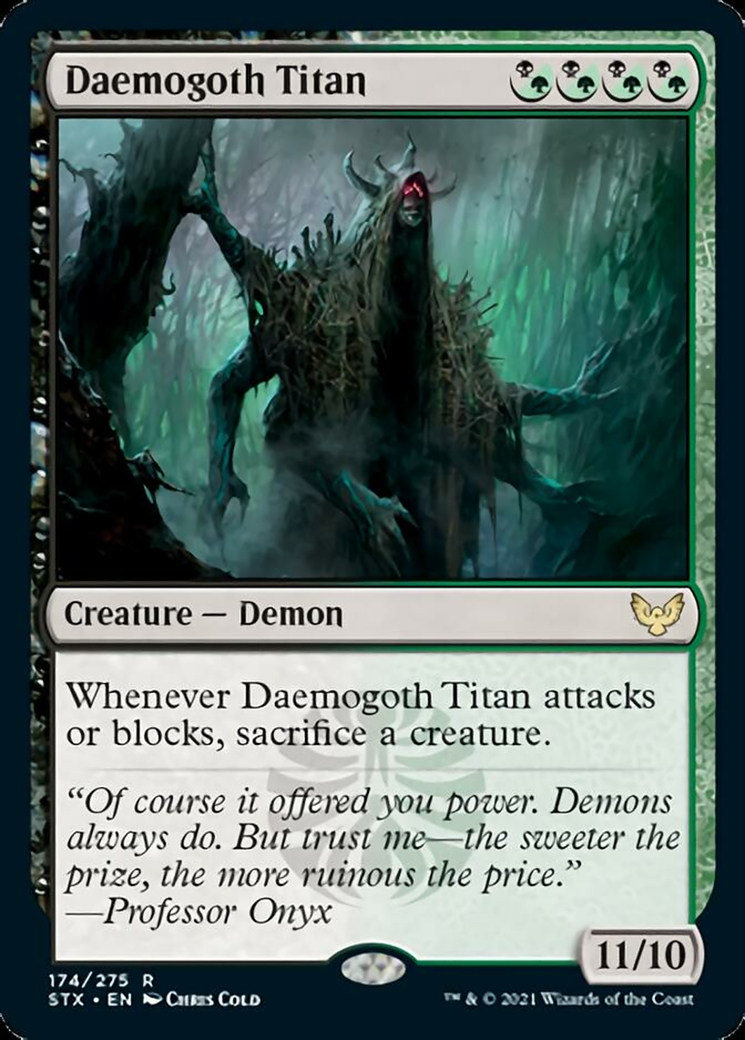 Now that we’ve created all these 1/1 Pests, Daemogoth Titan is the creature we want to sacrifice them to. Having all the Pests around will allow you to attack (maybe block) with Daemogoth Titan and get in for some major damage. If you can find a way to give this trample or evasion, it'll take only two hits to finish off your opponent. Another way to try and gain an advantage with this card is by using its high power. You can cast The Great Henge for only two mana with it on the battlefield or you can use this new spell, Tend the Pests. 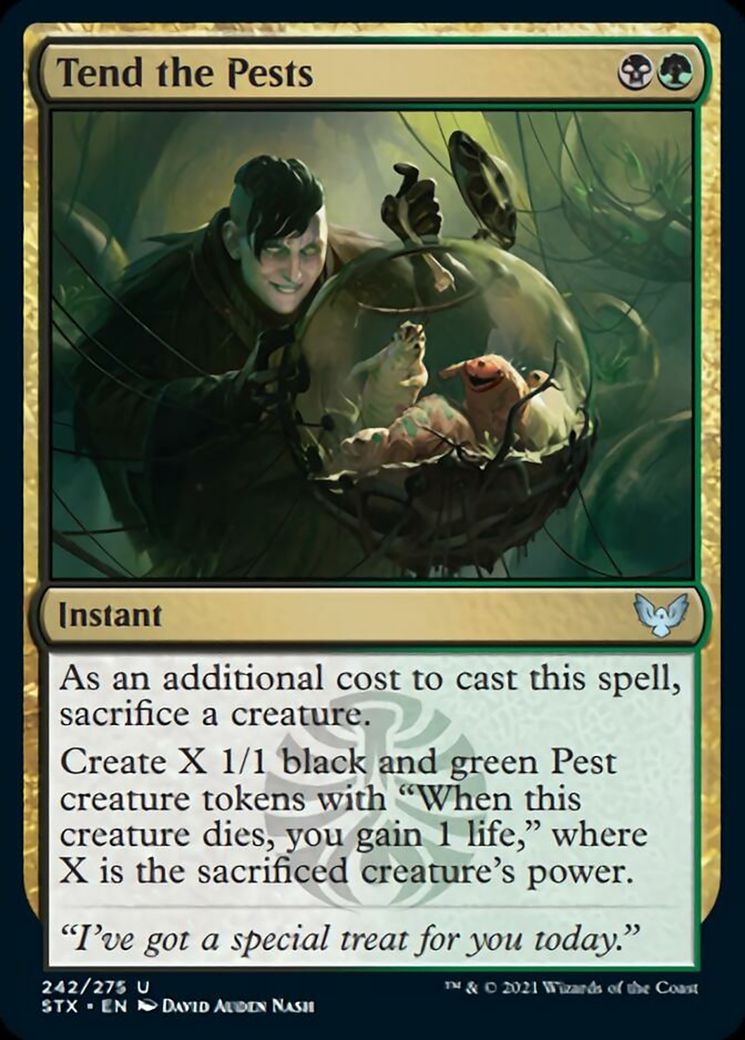 This will allow you to flood your side of the battlefield with eleven new Pests. Sometimes a go-wide strategy is a way to go and if your opponent doesn’t have a sweeper. Make sure you load up on a ton of new Pest tokens to make this combo work.

As you can see these Pests are going to be overrunning Strixhaven Limited play in the coming months. They're small, but often get in the way and help their controller gain life. Thanks again for reading the Daily Dose of Strixhaven. Join me again tomorrow as I open the next book of Strixhaven to see what’s inside.