Daily Dose of Strixhaven #11 – Mastery Rare Cycle – Which do you choose?

Welcome all to the Daily Dose of Strixhaven. Today I’ll be talking about an interesting cycle of rares from Strixhaven that allow you to cast them for a cheaper mana cost but at a price. Over the time of Magic, we've seen cards that provide alternative mana costs, whether it be with mechanics like Kicker, Entwine, or Buyback. Some of those alternate mana costs change the power of the spell. The difference though with this cycle is that they don’t want you to spend more mana, instead enticing you to spend less.

First up is the White Mastery spell, here is Devastating Mastery. 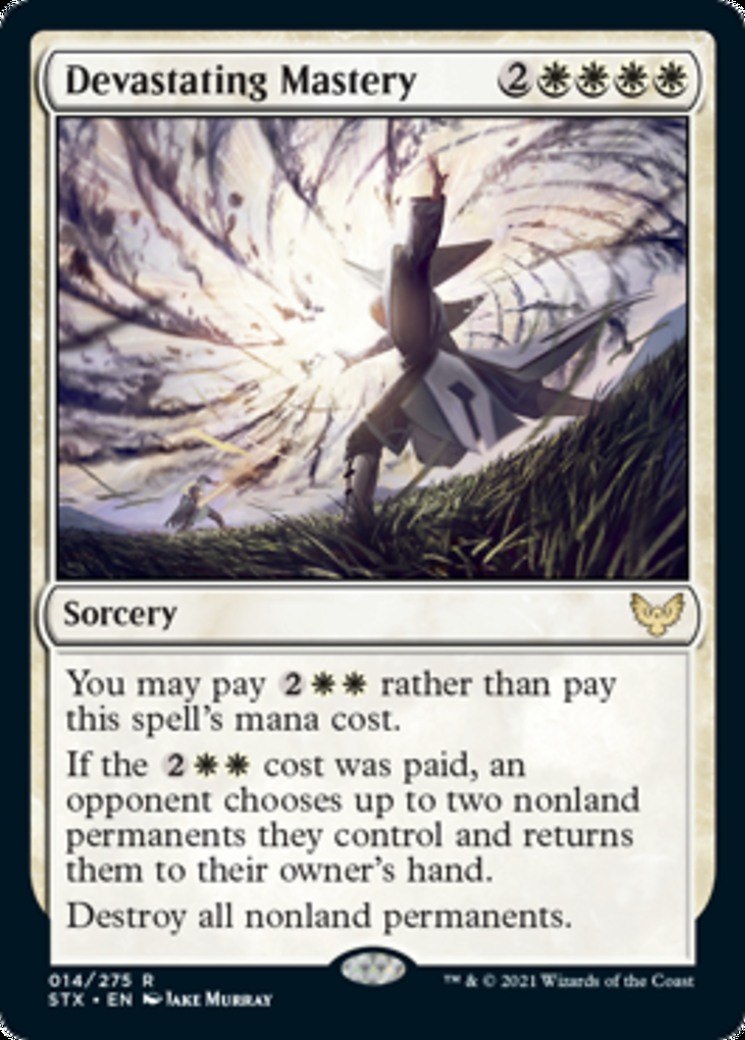 For six mana you’re able to destroy all nonland permanents. This is a massive sweeper, but the four White mana needed to cast it can be colour intensive to cast. This could be great in a control shell to make sure you don’t get overwhelmed, whether it be against a swarm of creatures, or a swarm of planeswalkers. For four mana, the spell completely changes with a different look altogether. Your opponent gets to bounce their two best nonland permanents and the rest on the battlefield are destroyed. Why would you allow them to get back their best spells? If it's the difference between losing the game during your opponents’ next turn and staying alive, this is a choice if you only have four mana to play with. This could happen against an aggressive deck thats already done a lot of damage in the early turns of the game. It’s still a good tempo play, but your opponent will be able to restock in the following turns.

Next up is the Blue Mastery Spell, here is Ingenious Mastery. 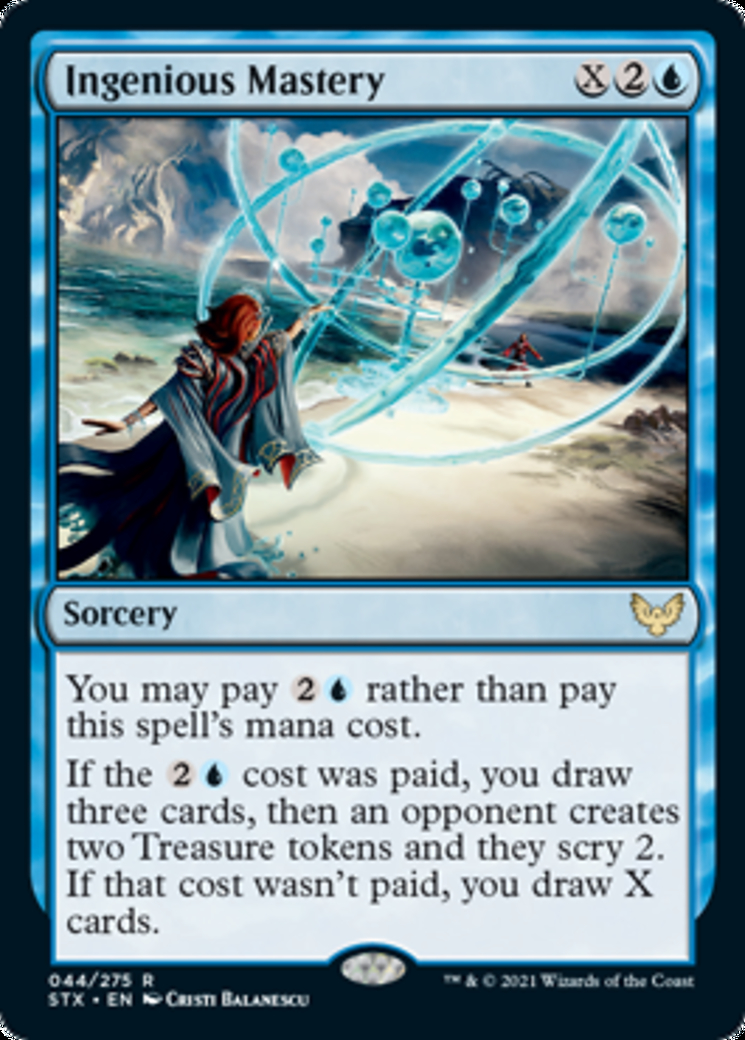 This is a solid spell and compares to cards like Blue Sun’s Zenith, Finale of Revelation and Mind Spring. The more mana you have, the more value and card advantage you will gain. For six mana, you get to draw three cards at sorcery speed. There are better spells that can draw you three cards for that mana, but later in the game, it can grow to give you even more cards and that’s where this card gains value. If you really need to find a card, draw a land, or have less mana you can always cast this for only three mana. It'll gain you three cards for three mana, which is amazing, but there's a price associated with it. Although your opponent doesn’t get to draw any cards themselves, they will get some ramp in the form of Treasures and card selection by allowing them to Scry 2. If your opponent is playing a deck in which they’ve already emptied most of their hand, the extra two, one-time use mana sources might not help them that much. The Scry 2 can help them find an answer, but that’s just a random chance that the card they need is in the top three cards of their library.

It’s time for some removal with the Black Mastery spell. Here is Baleful Mastery. 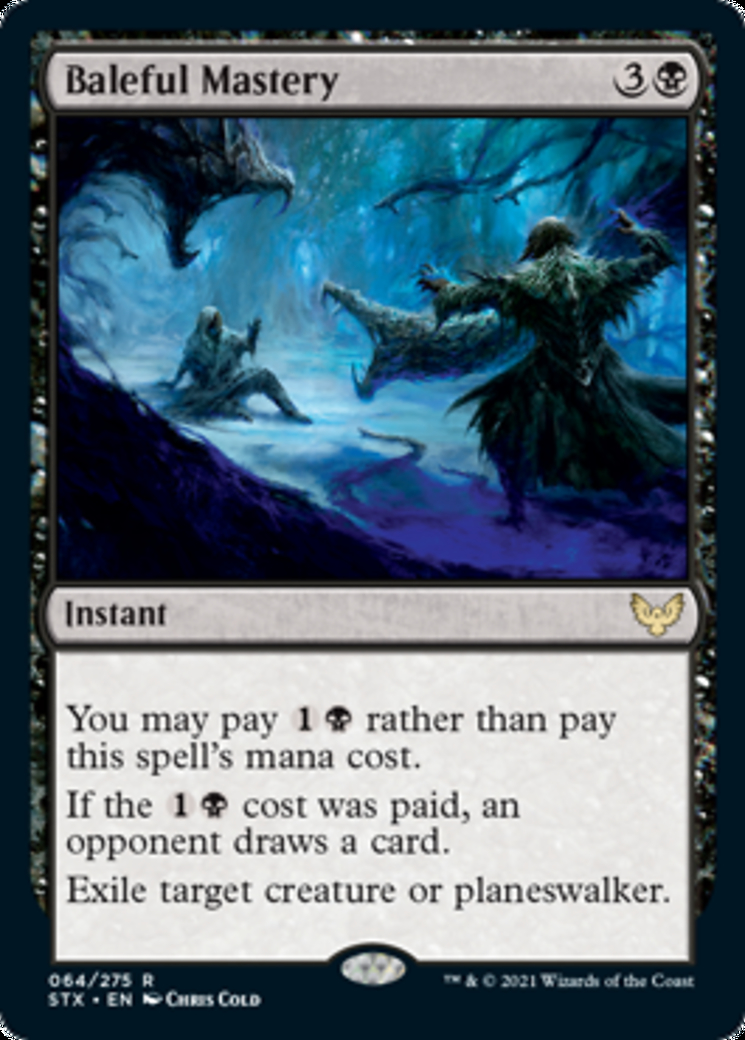 For the basic spell you get to exile any creature or planeswalker for four mana. We've seen the cost for this ability recently with Eat to Extinction. Bloodchief’s Thirst is four mana to destroy any creature or planeswalker, while cards like Swift End or Ruinous Path cost only three mana, but don't exile them. Sometimes you just don’t have four mana though, so there's an option to cast this spell for only two mana, but with a price. That price is allowing your opponent to draw a card, basically replacing the permanent they just lost. A random card draw will often not replace the power level of what you removed, but still softens the blow. Baleful Mastery can be cast at instant speed which raises its value significantly. The two-mana cost will allow you to save your remaining mana for another spell to cast like holding up a counterspell or playing another removal spell in the same turn.

The Red Mastery spell is up next, here is Fervent Mastery. 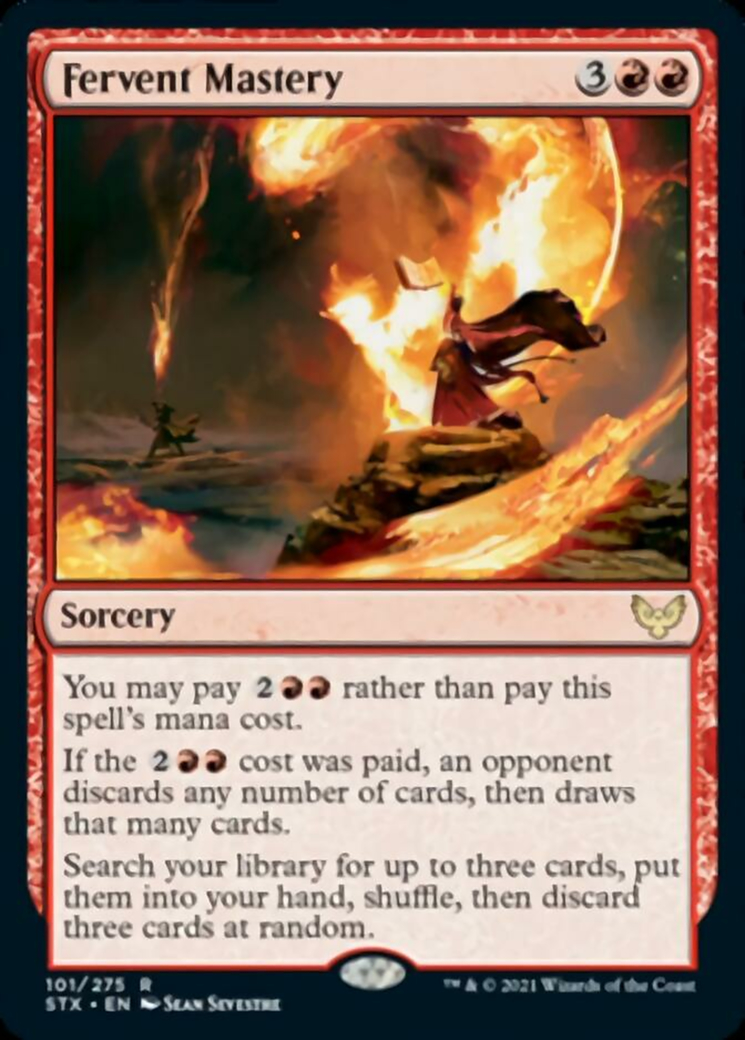 Let’s look at this card at its base and what it can do. For five mana you get to search your library for either your three best cards or ones that'll gain you value in your graveyard. This could include some of the new rare Prismari seven and eight mana instants and sorceries that you can discard to make a Treasure token. Prismari has ways to cast those spells from the graveyard so you might not be too sad if they happen to be discarded at random. There's an option to cast this one turn sooner if you want for only four mana, but it does come at a possibly significant price. If your opponent has an empty hand, then there's no drawback to casting this for four mana. If your opponent has four or more cards in their hand, casting it for four mana could mean that they get to discard and draw a ton of cards making the drawback way too high of a price. This is an interesting design for a card and is dependant on way too many variables to know whether it’s a great card. There are times where it can be what you need and other times it could be a dead card in your hand.

Finally, we have the Green Mastery spell, here is Verdant Mastery. 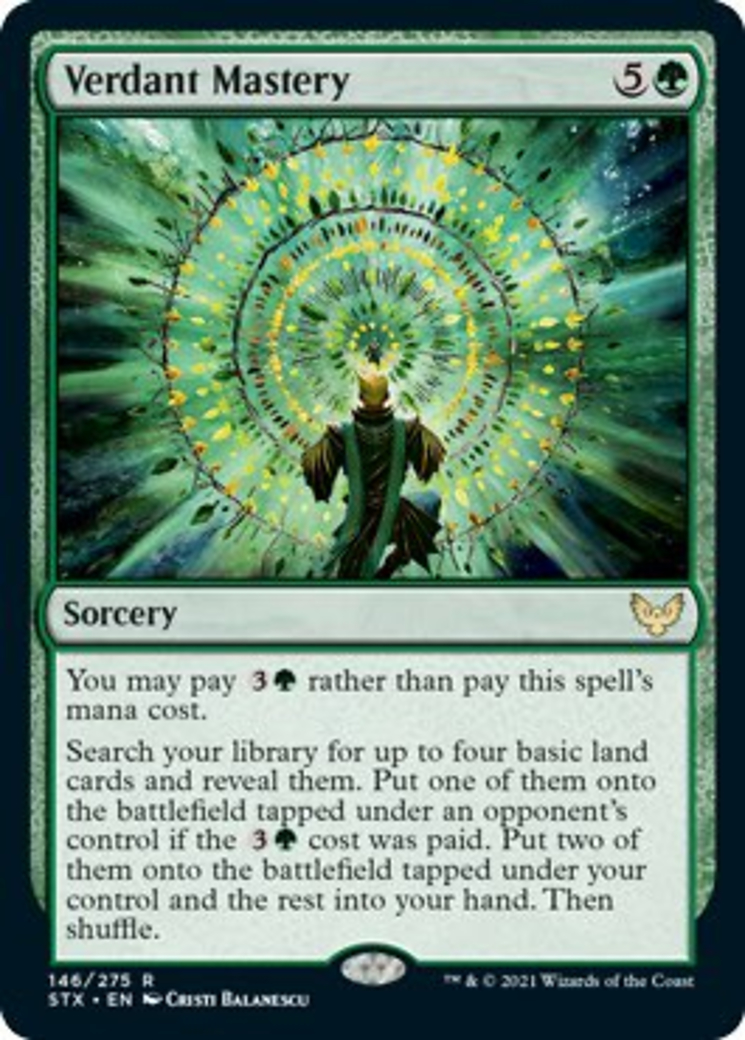 Green has always been about ramp so let’s see what we get for six mana. We get to search for four basic lands from your library, put two of them onto the battlefield tapped, and potentially play a third from your hand. This is basically a draw four spell for green that helps you ramp up significantly quickly in the late game. Sometimes though you need to ramp a little quicker in the game and that’s where the cheaper four mana cost for this card comes into play, but at a price. If you pay only four mana, you get the quick ramp of going from four to six lands on the battlefield, but your opponent gets one for themselves. There aren’t many scenarios where ramping your opponent for free is a good thing, but hand size and mana curve of their deck could make the extra land near irrelevant.

As you can see this cycle or rare spells will leave you deciding whether to wait out their natural course or cast them early and give your opponent an advantage. Thanks again for reading the Daily Dose of Strixhaven. Join me again tomorrow as there are more lessons to learn from this magical set.