Welcome all to the Daily Dose of Theros Beyond Death. Today I’m going to be talking only about some sweet new multicolour legendary creatures from Theros Beyond Death. I’ve always been a fan of multicolour Legendary creatures as they often push the power level between mono-coloured cards. They reward you for playing a certain combination of colours in your deck. I want to have cards with base stats that are higher than normal or a card that has way too many keywords for a mono-coloured card. Being legendary, they'll also spawn a slew of new Tiny Leaders and Commander decks across the world!

To start off I want to talk about a legendary lord that only costs two mana. Here is Gallia of the Endless Dance.

Gallia of the Endless Dance 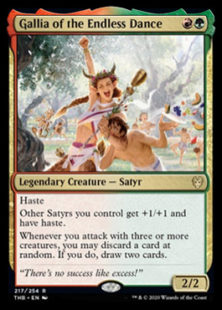 This card has a lot to take in for only two mana. Right off the bat you get a 2/2 haste creature for two mana which is strong by itself. The first question you must ask is, “How many other Satyr creatures are there in Standard right now?” Well the answer is 0. As I'm writing this, there aren’t any other Satyrs previewed in the new set. Will they add some more Satyrs into the set, probably, but on what power level we don’t know? So for now I ignore that ability and take it as extra value should there be some more printed. I think the real value will come from its last ability and the chance the draw some extra cards. Being able to attack with three creatures shouldn’t be that hard to do in a Gruul Aggro deck. It might be unfortunate if you discard a card at random that you need. But most times you can play it so it's an extra land you might not need. It’s nice that it’s a may ability, so you're not forced to discard. Another thing to note is that if your hand is empty, then you don’t have a chance to draw two cards with this ability.

Next up is a legendary creature that has a keyword set that has never been seen on a Magic card before and an ability like Grafdigger’s Cage. Here is Kunoros, Hound of Athreos. 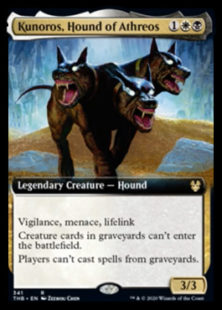 Talk about a great attacking and blocking creature. The combination of the vigilance, menace, and lifelink makes it a keyword triple threat we haven’t seen the likes of since Mantis Rider. Menace replaces flying, but often that will be enough to prevent your opponent from blocking. Whilst each attack is happening you are gaining 3 life a turn in the meantime. If your opponent doesn’t want to make that double block, you still have a 3-toughness blocker each turn as well that could gain you some more life. For its last two abilities you simply must look towards the potential power level of the new Escape mechanic. There will be a ton of new cards with the Escape ability that will be locked in graveyards thanks to Kunoros, Hound of Athreos. Don’t worry, it does more than that as well! If you are looking at what it can prevent that’s currently in Standard, how about shutting down the recursion engine that is Cauldron Familiar. As a bonus, it also prevents Jump-Start!

Finally, I want to talk about a legendary creature that is all about the value. Here is Atris, Oracle of Half-Truths. 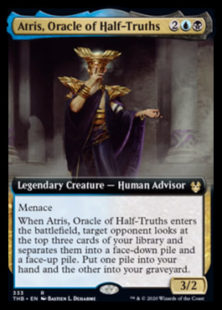 This card is an early leader for one of the best designed cards of the new set. Without looking at its enter the battlefield ability you still have a solid 3/2 creature with evasion. Even at four casting cost, this will get through for some damage later in the game. As for Atris, Oracle of Half-Truths’s enter the battlefield ability, it is basically a win-win situation. The fun comes from the strategy that your opponent can use to try and get you to choose the wrong pile, which in most circumstances is always the pile with one card. Unless you need a card to get you out of trouble, you always want to be taking the pile with 2 cards. Another decision point could be whether you have cards in your deck that want to be in your graveyard. If you have some Escape cards in those pile of 3 cards, it makes all decisions made by both players a little bit harder.

Does your opponent put an avg to good card face up, in hopes they won’t take the pile of 2 cards face down which has a better card in it? Do they perhaps put 1 very bad card face down in hopes you are intrigued and don’t take the two-known face up cards in front of you? There will be sometimes where you make the wrong decision, but often you can never go wrong with drawing two cards.

As you can see, Commander players are in good hands. Heck Atris, Oracle of Half-Truths is even an Advisor, for all those Persistent Petitioners lovers out there. Thanks again for joining me on the Daily Dose of Theros Beyond Death. Join me again tomorrow as I end the week previewing some of the great new cards from the set.