Welcome all to the Daily Dose of Theros Beyond Death. Today I’m going to be talking about a cycle of rare spells from Theros Beyond Death. Modular cards have been around for a while and provide players with versatility in their spells. Often the choices can be quite easy based on what’s on the battlefield leaving you wondering why there is even a second, third, or fourth option. (Looking at you command cycle) The rare cycle of Intervention spells in Theros Beyond Death add another level of choice by allowing you to choose how much mana you want/need to put into the spell. 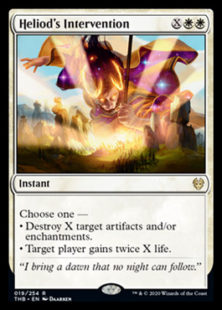 Heliod’s Intervention seems like it can either be a complete one-sided sweeper or an end of turn way to keep yourself in a game. The great thing about the Intervention spell cycle is that they'll never be a dead card. The first choice of Heliod’s Intervention is very well suited for Theros Beyond Death Limited as it is almost a guaranteed removal card. There is also a great chance that you will hit multiple targets in the mid-to-late game. If you must in a pinch, even spending three mana at instant speed to kill one artifact or enchantment will be worth it. The transition of this card into being prominent in Standard is the second choice on the card, gaining life.

Sometimes when you're playing a Control deck, you end up having a ton of mana open during your opponents turn. If it happens to be artifact or enchantment, you could destroy it. But, I think the best use against a lot of decks is to gain twice X life. This could allow you to possibly stay alive an extra turn or two. Which could allow you to draw into what you need to help turn the tide. I think this has the possibility of being a super amazing sideboard card, but wouldn’t be surprised if it didn’t see much main deck Constructed play. 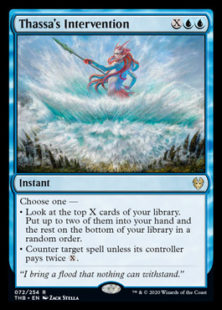 Thassa’s Intervention is everything blue players look for in a Control spell. One of the best situations you can be in for a blue player is being in control of the battlefield. Usually you want to use that mana to counter a spell, but sometimes you want to use it to draw more cards. The problem is sometimes you draw the spell that is opposite of what you are looking to do. Thassa’s Intervention allows you to have a spell that is versatile and have both options available.

For three mana, you can either draw 1 card, or force your opponent to spend two more mana to cast their spell. Not bad options for three mana. Like any X mana spell, it gets better with each mana you have available. At four mana, you can draw 2 or force your opponent to have an extra four mana available. Once you hit five mana or more, each choice gets better and better. Now you get to choose which cards you draw from your top X cards, rather than drawing off the top of your library. I think this is going be a Standard must play for all blue Control decks in the coming months. 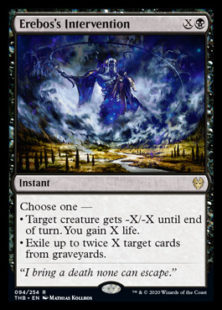 Erebos’s Intervention is setup to be a great combination of removal and main deck sideboard card. The removal side of the card is great against aggro decks that are trying to win the game quickly. It not only removes a threat, but also gains you some life to help you survive. It will have trouble removing something with better stats then its casting cost like Lovestruck Beast, but it could shrink it down during combat so that you can have better blocks for it. With all the Intervention spells, it's power grows later in the game.

This could be a great way for something like a Grixis Control deck to survive into late game. The ability to exile cards from graveyards is the sideboard card you sometimes wish you had in game 1 of a match. This can help you against reanimator strategies and most importantly help you battle against the power of the new cards with Escape casting costs from Theros Beyond Death. 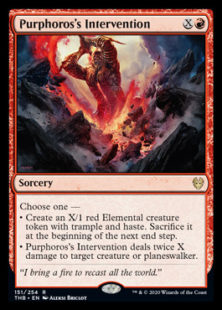 Purphoros’s Intervention is a Sorcery compared to the other three we have seen so far, which is unfortunate for the removal side of the card. If you aren’t too worried about casting it during your turn though, it can be a great removal spell. For two mana, you can deal 2 damage to a creature or planeswalker. Three mana, you can deal 4 damage, which should be able to take care of most creatures. With four mana, gets you 6 damage, which should allow you to take care of any creature or planeswalker. If killing things isn’t what you are going for, you can create an X/1 with trample and haste. This could be a great finisher for certain decks who sometimes run out of uses for their mana. 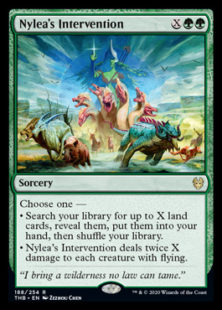 Nylea’s Intervention is the Intervention spell I think got left behind while the other Intervention spells got to grow into strong spells. I do understand that it has some uses for sure, but it will often not have a strong impact on the game. It can still do some great things. Being able to thin out your deck so you have little to no lands left means that each subsequent draw becomes much better. This therefore gives you a positive grade when it comes to future card selection. I’m not a big fan of the aerial destruction that is the other choice of this spell, but I do understand, especially in Limited there are times when you can get overrun by a deck full of flying creatures. I still think this is weakest of the group though.

The group of 5 rare spells is complete and seem to be some of the most versatile spells in the entire set. Thanks for reading preview season on the Daily Dose of Theros Beyond Death. Join me next week as I enter prerelease week on the Daily Dose. 5 days of helping you prepare to play in this new Limited format.