Daily Dose of Theros Beyond Death #2 – Rise of the Planeswalkers

Welcome all to another edition of the Daily Dose of Theros Beyond Death. Today I’m going to be talking about the return of a planeswalker we haven’t seen since original Theros. Elspeth has been a fan favourite in the Magic Universe since she first appeared years ago, but with her death in the original Theros and being stuck in the underworld, players were wondering if she would ever return. Well, it looks like Theros Beyond Death will see the return of Elspeth. It’s great to see a planeswalker we haven’t seen in a set in almost 6 years. In Throne of Eldraine we saw the return of Garruk after almost five years, so it’s good to see old favourites finding a home in newer sets as some players might not have been able to experience or play with them.
With the setting of Theros, there are some other planeswalkers that fit right at home in that world and one of them is Ashiok. Here is Ashiok, Nightmare Muse. 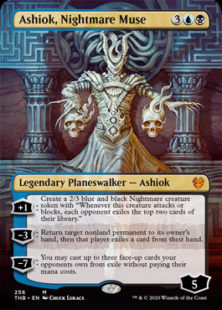 I’ve always been a fan of all Ashiok planeswalker cards and this 5-mana one works well in conjunction with the other Ashiok in Standard, Ashiok, Dream Render. Let’s break down the abilities for this planeswalker.

[+1]: Create a 2/3 blue and black Nightmare creature token with "Whenever this creature attacks or blocks, each opponent exiles the top two cards of their library." – Having a positive planeswalker ability that creates creatures should not be overlooked. Even the third point of toughness on the creature is huge in allowing it to survive some combat scenarios. This could allow you to both attack and block with it so that you can exile more cards. When in doubt, creating an unending army of Nightmare tokens could win you the game by itself.

[-3]: Return target nonland permanent to its owner's hand, then that player exiles a card from their hand. – This acts as a two-for-one ability which if your opponent has an empty hand basically reads “Exile any nonland permanent.” Even if they have cards, bouncing any nonland permanent and making them exile a card is great value by itself. It will put Ashiok, Nightmare Muse down to 2 loyalty so you must make sure you are able to protect it if needed.

[-7]: You may cast up to three face-up cards your opponents own from exile without paying their mana costs. – This is an interesting ultimate ability, as sometimes your opponent might not have any exiled cards without you using the -3 ability of Ashiok, Nightmare Muse. The first ability has the chance to exile some cards, but isn’t guaranteed. There will be more cards in Theros Beyond Death involved around exiling and bringing back cards from exile which could make this ability better or worse depending on those cards.

Now it’s time to talk about the long-awaited return of Elspeth. Here is Elspeth, Sun’s Nemesis. 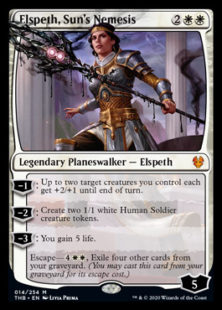 [-1]: Up to two target creatures you control each get +2/+1 until end of turn. – This could add 4 power and/or 4 extra damage to your opponent each turn. This can change the clock significantly and finish them off in just a few turns. This ability does require you to have two creatures you want to attack with on the battlefield. Even having only 1 creature makes this ability a bit worse.

[-3]: You gain 5 life. – This is an ability you can only use once per iteration of Elspeth, Sun’s Nemesis, but could help you survive. Imagine using this to gain 5 life, killing it, bringing is back with Escape and gaining 5 more life. Gaining 10 life in one turn with the same planeswalker can give you enough time to survive.

There you have it folks, two new planeswalkers for you to start your deckbuilding engines started. I think there is still 1 or 2 more planeswalkers to come. It’ll be interesting to see who joins the fray. Thanks again for reading the Daily Dose of Theros Beyond Death. Join me again next week as a I continue the adventure that is Theros Beyond Death!