Daily Dose of Theros Beyond Death #7 – Devotion in Standard – Black

Welcome all to the Daily Dose of Theros Beyond Death where today I’ll be continuing a series of articles during preview season looking at what each colour brings to the table when it comes to devotion. I want to focus today on cards from a certain colour that already exist in Standard that could start to see more play thanks to possible devotion decks for that colour. Today that focus in on black. One of the favourite mono-coloured decks for players to make is Mono-Black Devotion. Often it has some great devotion payoffs and some sweet cards to help you raise your devotion count quickly. Before I talk about a devotion card coming in Theros Beyond Death, let’s have a look at the best cards available right now for a devotion deck using black in Standard. 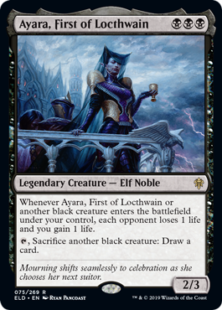 Ayara, First of Locthwain – A three-mana, three-devotion creature that keeps draining the life out of your opponent while providing you some card advantage as well. Seems like a sure fit for a mono-black devotion deck. 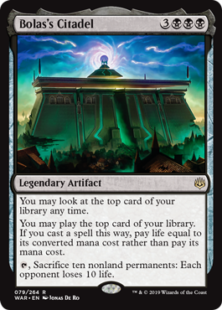 Bolas’s Citadel – Seems like a great artifact to sit on the battlefield and provide you some card advantage while also raising that devotion count by three. 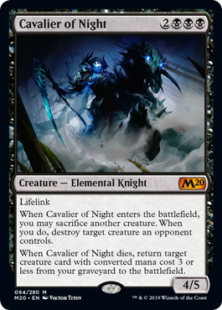 Cavalier of Night – A great removal/creature to begin with, it provides a solid devotion count while also providing the value of getting something back onto the battlefield when it dies. A would recommend maybe Ayara, First of Locthwain as a great 3-mana casting cost creature to return. 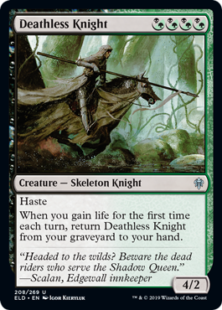 Deathless Knight – Black has plenty of ways to gain life, so you can make sure that you are able to get this creature consistently back onto the battlefield and take advantage of its devotion count of 4. 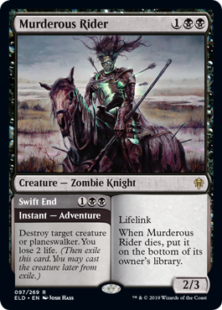 Murderous Rider – You will want to make sure you have some removal in your deck on top of all those permanents you want on the battlefield. This will provide both that needed removal and some solid devotion when it hits the battlefield. 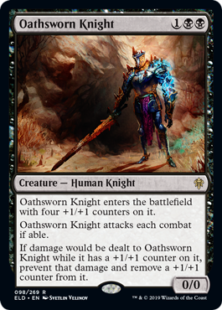 Oathsworn Knight – I have always thought highly of this 3-mana creature and I think with it’s two devotion count for three mana, could see some play in a mono-black devotion deck. 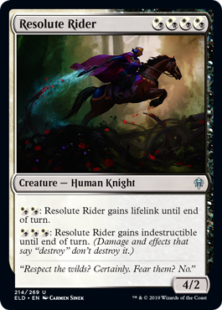 Resolute Rider – I love this creature a lot more in a mono-black devotion deck thanks to working well with Deathless Knight. Plus, who doesn’t want 4 more devotion on the battlefield. 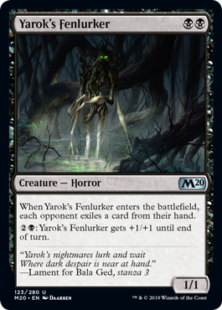 Yarok’s Fenlurker - The only two-mana, two-devotion creature for black currently in Standard could become a go to in devotion decks. It does provide card advantage and could grow larger later in the game.

Now that we’ve seen what’s already in Standard, it’s time for one of the best possible reprints we could have gotten in Theros Beyond Death. It is the ultimate devotion payoff card for any Mono-Black devotion deck. Welcome the return of Gray Merchant of Asphodel. 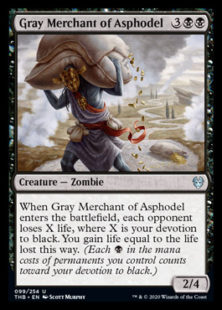 When the original Theros came out, I was really starting to play a lot of Magic and Gray Merchant of Asphodel was one of the reasons for that rise in play. Just the idea of playing a creature and draining your opponent for 5, 6, or more life in just one shot was too much to pass up. Never has a 2/4 five mana creature been so feared. There is a reason it has been moved from a common to an uncommon. As you can see above, there are plenty of ways to build up your devotion count quickly so that on turn five, even with only two of the above options on the battlefield already, you will be draining your opponent for 6 life or more! It would be nice to see a few more solid cards in Theros Beyond Death that either help the devotion count or are devotion payoff cards like Gray Merchant of Asphodel.

There you have it folks! The best black devotion card has been reprinted and now we wait until all the other wonderful devotion treasures have been released from Theros Beyond Death. I look forward to seeing what other mono-coloured devotion decks I can start building for Standard. Thanks again for joining me on the Daily Dose of Theros Beyond Death. Join me again tomorrow as we delve into more talk about the new set!