Daily Dose of Throne of Eldraine #10 – Are mono-coloured decks the future of Standard?

Welcome all to the Daily Dose of Throne of Eldraine. Today I’m going to be talking about one of the main strategies for Throne of Eldraine Limited (and potentially Standard as well): Mono-coloured decks. In Limited this could also mean that you are playing predominantly 1 colour and splashing a second colour. Why is Throne of Eldraine leaning this way? That's because it's been announced that the winter set in January 2020 is the land of devotion: Theros. Today's cards have a ton of coloured mana symbols in them, and don’t need much generic mana to cast them. Often having more coloured mana symbols in general implies a higher power level on the card, which is also exciting when you play mono-coloured cards.

Today I’m going to be focusing on green cards with the first being a legendary knight. Here is Syr Faren, the Hengehammer.

It’s a little bit odd that there's a Knight in green. This means that you probably won’t be able to use this with any of the Knight strategies. Two mana for a 2/2 creature if reasonable, but it’s main value is gained in combat. If you're attacking with this on turn three, you can only gain value out of its ability if either you have played a creature on turn one that can also attack or you have a creature with haste to play on turn three. In most cases you'll have to wait until turn four or later before you can give another attacking creature a boost. If you can find a way with an Equipment or Aura to pump up Syr Faren, the Hengehammer’s power, then this card could end up being ridiculous.

Next up is a card in a series of 4-mana hybrid costing cards. Here is Oakhame Ranger.

One of the key things to remember when looking at devotion is that hybrid mana symbols count as both. In most cases, you'll want to cast the Adventure first, and then cast the creature a turn or two later. This also means you will have more creature to pump up with its ability as well. When blocking you can block and use its ability for even better value.

It’s now time to talk about another card with 4 coloured mana symbols in its cost. Here is Feasting Troll King. 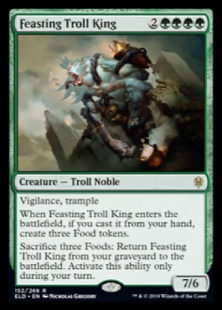 I love this card so much. Being a 7/6 vigilance trample creature means that it will be near impossible to attack through it on the ground and impossible to block when it’s attacking. Guess what? You get to do both each turn! I think that alone would make this a great creature. On top of that it gives you not 1, not 2, but 3 Food tokens. These can be used for whatever cards might need them or you could use all 3 Food tokens to reanimate it. One thing to note is that when you use its ability to reanimate it, you won’t get three more Food tokens. This ability almost acts like Persist or Undying, but without any counters going onto the creature. Having four coloured mana symbols is sure to come into play with the Theros set coming soon.

Finally, here is a look at a 3-casting cost creature that of course costs 3 green mana to cast. Here is Yorvo, Lord of Garenbrig.

To start off you get a 4/4 creature for only 3 mana, which has a history of being powerful. Thanks to its main ability, it can also grow every time another green creature enters the battlefield. One of the best ways to add +1/+1 counters is with green creature tokens. Biogenic Ooze will add two +1/+1 counters thanks to the Ooze creature it creates. When Conclave Cavalier dies it will get you two 2/2 green and white Elf Knight creatures and two +1/+1 counters on Yorvo, Lord of Garenbrig. If you cast Izoni, Thousand-Eyed later in the game, all the green Insect tokens created will add a ton of power to Yorvo, Lord of Garenbrig. When in doubt you could always add two +1/+1 counters by casting my friend and your friend Tolsimir, Friend to Wolves. Although harder, you can also add multiple counters if a larger creature enters the battlefield like Feasting Troll King.

These cards in Throne of Eldraine that depend on coloured mana will make it difficult to play multicolour decks. There doesn't appear to be much fixing in the set, so choosing one strong colour might be correct. Thanks again for reading the Daily Dose of Throne of Eldraine. Join me again tomorrow as I talk about some more fun new cards from the set.