Welcome all to a brand-new season here on the Daily Dose. It’s time to focus on the return of Zendikar and everything it’s going to be bringing us. Throughout the next couple of weeks, I’ll be analyzing some of the previewed cards and their impact on the brand-new Standard season. Each day we'll have my first impressions of new cards and the impact they will have on the Standard format. I hope you can join me on this ride as we enjoy the new gifts given to us in the form of sweet new Magic cards.

Speaking of sweet new Magic cards, I have some first impressions of a few new planeswalkers, but before I do that, I wanted to talk about Set Boosters. Set Boosters are a new type of booster pack they are offering starting with Zendikar Rising that is more for the collector in you. Players will have the chance to get multiple rares per pack, guaranteed foils, and a chance to get a card from the mysterious “List” of 300 cards. I’m a fan of providing an alternative experience to players and it should be interesting to see which cards show up on this magical “List”.

Now that we know there are new ways to open packs, it’s time to look at a new card from the set. Here is Nahiri, Heir of the Ancients.

Nahiri, Heir of the Ancients 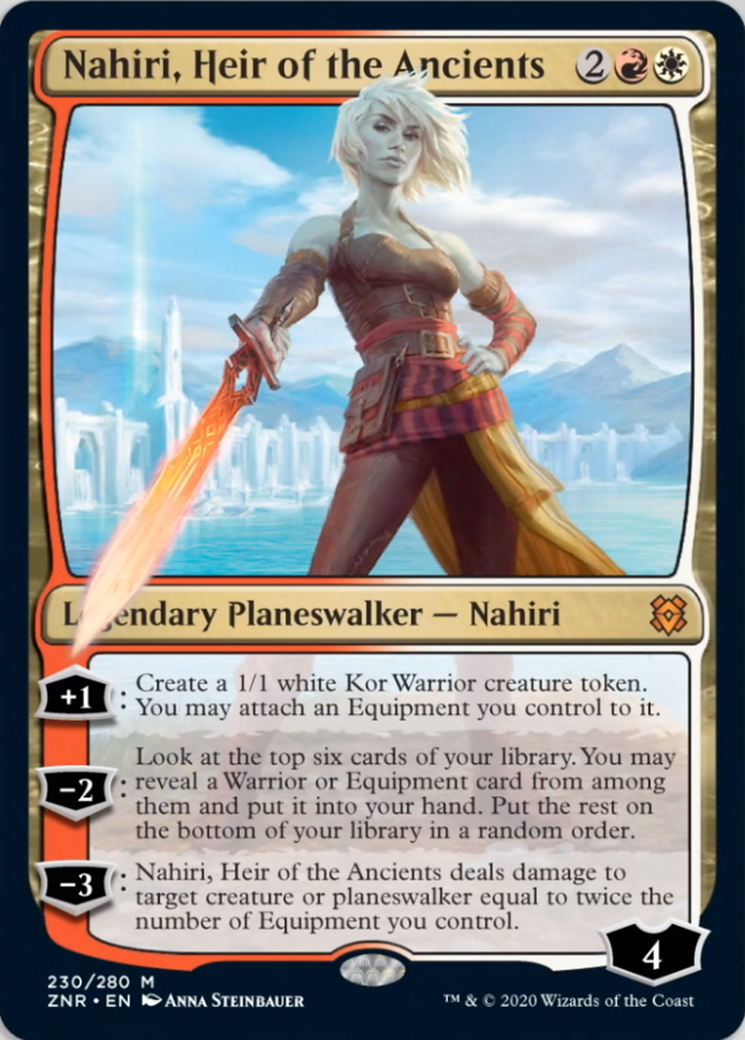 Nahiri, the Equipment planeswalker is here. As you can see, all her abilities have to do with Equipment, which means there should be a ton of new Equipment coming in the set. There are a few powerful Equipment that won’t rotate out though. Embercleave has been played for the past year and would work in a Red/White deck. Mace of the Valiant is a great Equipment to play the turn before you cast Nahiri, Heir of the Ancients. Lastly, the ever-overlooked Shadowspear could see a return to play in an Equipment deck.

Let’s have a look at Nahiri's abilities:

[+1]: Create a 1/1 Kor Warrior creature token. You may attach an Equipment you control to it. – Anytime you can have a plus loyalty ability that puts a creature on the battlefield, you’re laughing. If you can get any of the Equipment, we mentioned above on the battlefield beforehand, it adds even more value.

[-2]: Look at the top six cards of your library. You may reveal a Warrior or Equipment card from among them and put it into your hand. Put the rest on the bottom of your library in a random order. – Anyone up for some Red/White Warriors? Although there are sure to be some new Warriors in Zendikar, you can recruit some of those sticking around post rotation. Alpine Houndmaster can gain you even more card advantage. Haktos the Unscarred is a great finisher to have on the battlefield. Don’t forget the Legendary Winota, Joiner of Forces. It can help grow your army even larger. As for Equipment, see above.

[-3]: Nahiri, Heir of the Ancients deals damage to target creature or planeswalker equal to twice the number of Equipment you control. – This ability is going to be hit or miss depending on when you cast it. Having a deck full of Equipment cards will often not work out well if you don’t have enough creatures. I can see this doing two-four damage at times when you do use it, it will be rare for you to have three Equipment on the battlefield, especially on turn four or five of the game.

Overall, this is a very deck specific planeswalker if you want to gain the most value out of it. Its true power will appear once we see more cards from the new set emerge.

Finally, I have the return of the iconic Jace, and they always say that two is better than one. Here is Jace, Mirror Mage. 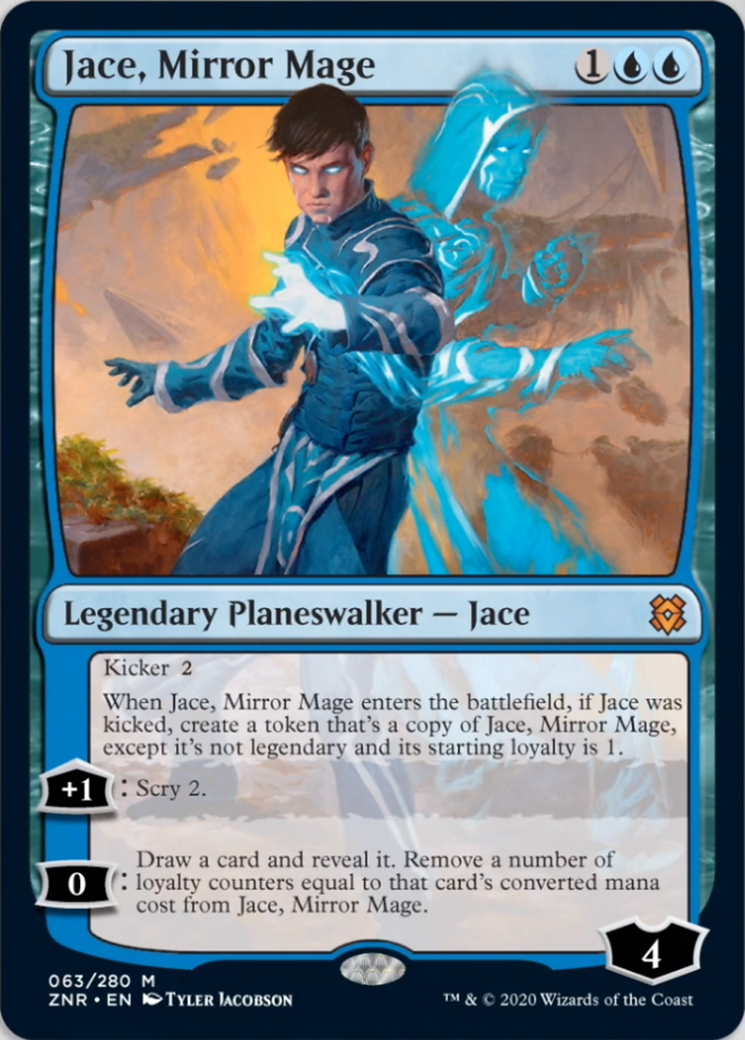 Three-mana Jace makes a comeback, that’s of course unless you want a five-mana Jace. That’s right, a planeswalker with kicker that allows you to have multiple Jace, Mirror Mage’s on the battlefield. Let’s have a look at the abilities of this planeswalker.

When Jace, Mirror Mage enters the battlefield, if Jace was kicked, create a token that's a copy of Jace, Mirror Mage, except it's not legendary and its starting loyalty is 1. – Two Jaces for the price of one means that you can either Scry 4 to really find the card you need, or Scry 2 on your main copy of Jace, while the copy uses that Scry knowledge to hopefully draw a land and stay alive. I do love the design of this card and wouldn’t mind playing this on turn three or five.

[+1]: Scry 2. – Scry 2 as a recurring ability can be underrated since it will help you draw a card almost every turn. If you can use it in conjunction with a card-drawing ability it becomes even more valuable and allows you to improve your card quality selection drastically.

[0]: Draw a card and reveal it. Remove a number of loyalty counters equal to that card's converted mana cost from Jace, Mirror Mage. – This is a great zero costing draw ability on a planeswalker as it should balance out over multiple activations, meaning, you will get lands sometimes, but other times you could draw another Jace, Mirror Mage for example, and lose three loyalty right away. Its power can also be decided by the mana curve you have in your deck. Its value becomes even better when you have a bunch of 1-2 mana cost spells in your deck.

I think that Jace, Mirror Mage will see a bunch of play in upcoming Standard thanks to the versatility that kicker brings to the card and the fact that card advantage/selection spells often find a place in the Standard metagame.