and random thoughts on community...

I'm back once more with a Standard brew that seems to hold its own in the current environment. The project spawned from a few ideas of card groupings I liked together. As usual, I had a decent core idea, but had a hard time fleshing the list out. Luckily, I took it to my teammate Aaron Stross for tweaking. He's particularly gifted in deck building and limited play and has proven instrumental in seeing my ideas come to life.

This deck isn't intended to be a big player in competitive Standard. But it is meant to help us expand on our deck building skills and scratch that jank itch. It's mildly surprising, but I've been able to achieve a respectable amount of wins with this deck on Arena.

This time around I was interested in making a Jund Combo deck revolving around Thud and a large, cheap creature. The original idea was a Kraul Harpooner for two mana with a big undergrowth trigger plus Thud seems pretty sweet. Then the inclusion of Golgari Raiders naturally came along. Who doesn't love getting haste-punched for 12 and then Thud'ed for 12 immediately after?

Let's see the point Aaron's tweaking brought us to:

The deck is actually surprisingly powerful and can pull off some pretty impressive graveyard shenanigans. There's a single Bone Dragon as a recurring threat and Plan B in case you mill by it; as is the case with Gravitic Punch. If you pass it, it's still a one-use trick from the graveyard, pairing nicely with our combo creature Kraul Harpooner and Golgari Raiders.

It was a non-zero number of times in practice that I felt it was right to use a Thud on turn two, to toss a Stitcher's Supplier at an opposing one toughness creature. This seemed to lead to a little bit of extra time and a thicker graveyard, capable of nastier undergrowth counts. 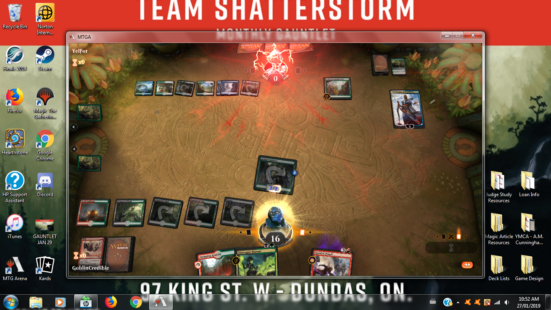 Gutterbones is a nice little recurring threat when you can find incidental ways to damage the opponent.

"Oops, my Stitcher's Supplier got you for one. I guess I'll bring this Gutterbones back to hand."

From Aaron's touch-ups to the deck, I cut the three Light Up the Stage and replaced them with Wand of Vertebrae, which has some incredibly interesting uses. Not only does the wand lead to some insanely large undergrowth counts earlier than expected, it can recycle combo pieces back into the deck after milling them, it can find one-shot graveyard cards to use... It really feels like a Swiss Army knife in this deck. However I'm not opposed to experimenting with Treasure Map, either.

Rix Maadi Reveler is a sweet addition here, as it does basically everything we need it to. It's  a 2/2 that is more than likely to die easily (to heighten your creature count in graveyard for undergrowth), it can rummage (discard, then draw), OR it can cycle your whole hand to draw three cards if you pay it's spectacle cost. What a bounty of options!

I'm completely taking Aaron's word on the mana base here because I'm super terrible at working with mana. To be fair, I've never really had much of an issue with the lands while playing this deck on Arena.

Overall I wasn't totally satisfied with Priest of Forgotten Gods. It seems a little slow. It's a really neat card but I don't think this is the list for it. I think that card wants to be used for other purposes, like casting an early Gruesome Menagerie, etc. Actually, the original raw version of this deck I had built was running Gruesome Menagerie with a weird return package of Stitcher's Supplier, Kraul Harpooner, and Gruul Spellbreaker. The idea was to find ways to recycle our big creatures in case we mill past them. This probably indirectly lead Aaron to including Bone Dragon and Gravitic Punch, a much more solid Plan B than Gruesome Menagerie into an undergrowth creature plus Thud (already in hand).

I think the keys to improving this deck to its "ultimate" form will be experimenting with replacements for Priest of Forgotten Gods, dropping the Light Up the Stages for Wand of Vertebrae, and maybe adjusting the Thud count.

Drawing more than one Thud usually stinks, and it doesn't have too many uses unless we're looking to close the game out. Using a Thud to kill something with a Stitcher's Supplier, as mentioned before, is just gravy. You can't draw it up like that every time though. I'm starting to think I may want to trade down a Thud up to a second Gravitic Punch.

The next stage from there will be to develop a sideboard, something I haven't put much thought into yet. I'm fairly certain the side would love to see typical culprits such as Duress, Vraska's Contempt, and the like. Rhythm of the Wild should be a solid inclusion into the sideboard. Making our combo creatures un-counterable is fantastic, and that way would Golgari Raiders have haste... and so would Kraul Harpooner! A two drop hasty threat that is that big is just plain SCARY! It's worth noting that if the opponent controls a flyer you MAY fight it with Kraul Harpooner. It's either a removal spell, or half of our combo. You tell me.

I'm thinking a small number of Cindervines may make it into this sideboard. Bedevil is possible if we want to go quicker than Vraska's Contempt, maybe something like Dead Revels to recycle combo creatures - there are many avenues to take, and this is just the start. 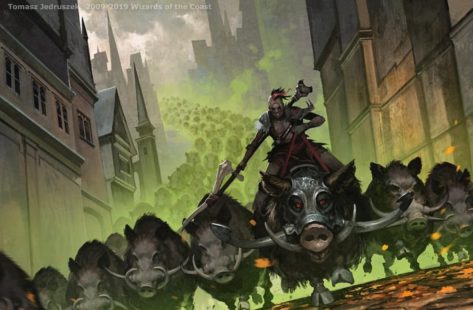 This deck has been incredibly fun to play and just as much fun to work on. It'll probably make its way back around and see another article with a full sideboard and maybe a tourney report! Sometimes it's nice to take a break from the nature of competition and play jank for fun or build to explore ideas.

Deck building is an incredibly artistic process and as an artist of other mediums, I both appreciate and recommend slowing down on competitive events from time to time to value other parts of the game. Playing a random game of EDH or helping brand new players build a deck for their first time in store are two things I've been involved with lately that I usually wouldn't be.

Check it out, I had tons of fun with both of those things and they kind of reminded my why I started playing Magic. I normally wouldn't show up looking to teach people to play; I find it boring, I'll be honest. However, I had nothing else to do, and the two players I was teaching were genuinely excited and seemed flabbergasted that I'd even want to help them. It was as if these new players saw me playing in an LCQ (Last Chance Qualifier for the RPTQ - Regional) and that made them think I was above helping them or something.

This was some of the most fun I've had playing Magic recently, and it was literally with a Bant deck made up of contents of eight random packs vs. a Dinosaur themed Planeswalker deck. Sure, it took us like 10 minutes to play through one turn for each player, but I'm almost certain those two will want to continue playing Magic.

Bant Sandwurm Convergence got crushed by the Planeswalker deck, but I did my best to help him build from what was available to him. 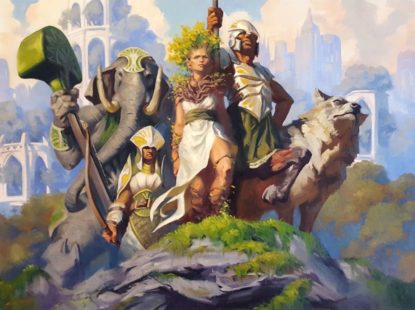 The camaraderie, sense of community, sharing, lending, carpooling, trips, and genuine excitement of new players are the things that I'm trying to live for in this gaming community BESIDES trying to win the tournaments I play. I encourage everyone to set out-of-game goals in Magic that have nothing to do with your play. Lend a deck to someone, offer that young kid at FNM a tip on how to improve their deck or offer some kind words after watching someone play. Try to lead with compliment before criticism, and keep positivity as the focus and I ensure that you'll get a lot more out of the game and the community surrounding you.

Thanks for popping by and reading! I really appreciate the support and kind words.
If you'd like to follow my M:tG journey more closely, please check out my Twitter: @GoblinCredible