Card of the Day - Champion of Lambholt

Even though I've been playing Magic the Gathering for some time, my most recent and deepest foray into the game introduced me to Commander/EDH and the format had plenty to offer me. So much so that I went and immediately snapped up the first pre-constructed deck that appealed to me, Commander 2016's "Breed Lethality". Or, as it's better known, the Atraxa deck.

While there are tons of great cards from that deck that I could focus on today, we're going to look at a card that has seen a lot of utility in a lot of Commander decks. 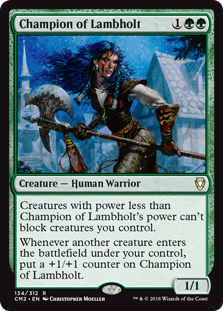 Champion of Lambholt is a non-legendary creature that comes in with one power and one toughness for three mana, two green. While that might seem like a terrible creature to you, its beauty comes in its rather strong textbox. If a creature has a power less than that of Champion, it can't block creatures you control. That alone would make this a strong addition to, say, a Simic deck or even a worthy addition to a tron deck.

But the real beauty of this card comes with the fact that this static ability is also teamed up with the fact that you can place a +1/+1 counter on it for every creature - token or otherwise - that enters the battlefield under your control. Which means that you don't have to really do anything to make this card amazing. Suddenly, Champion of Lambholt goes from a card that needs other pieces, and possibly even equipment to be good, to a card that could only be more awesome if it were harder to remove. Like, say, an Enchantment or a God or something along those lines.

Champion of Lambholt has a lot of utility in a lot of decks. It fits nicely in just about any creature focused deck, maybe a Selesnya Populate deck. It goes well with any tribal or combo deck that has you going wide very quickly. It's a perfect addition to a Simic deck that focuses on counters and, preferably, Proliferate... I mean, the utility for this card is pretty vast.

One of the most popular homes for this card lies in most Simic or Proliferate decks and a great example was created by the user finallegend on TappedOut. This deck gives you a great example of how to use Champion of Lambholt in tandem with Atraxa in Commander. Check out the list, appropriately titled "Well, The Proliferated Quickly":

As you can see, a deck like this would support Champion quite nicely. As a card near and dear to my start into Commander, I would like to know what everyone else thinks of this one.