The full Core 2019 card gallery has been revealed with less than two weeks to go before Prerelease. But while the full list is now out, there are still plenty of cards left to go over. Knowing the cards is only half the battle, finding uses for each of them in the current Standard format is just as important. Today I’ll be covering some cards that are focused on one creature type, Zombies. Zombies were last prevalent in the Amonkhet block where they were embalming the undead daily. After a short break, Core 2019 is bringing Zombies back. Mono-black decks rejoice, you now have one of your key tribes back to battle it out!

To start off today's analysis, I want to look at a new enchantment from Core 2019 that will protect you from removal heavy decks and provide some backup at the same time. Let's look at Open the Graves: 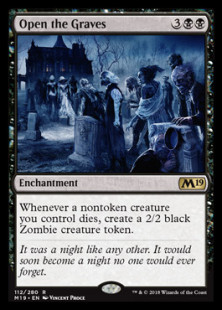 This card makes sure removal heavy decks pay a price for destroying your creatures. One for one removal spells used against your creatures will be nullified by replacing them with a 2/2 Zombie token. While on the surface this card looks amazing, there are some things to worry about. Primarily, its casting cost is way too high for it to be viable in a Zombie deck.

Zombie decks often play low-cost creatures in the first few turns. By turn five, if you play this out, some of your creatures may have already died from removal spells. It would be nice to play this before you play your creatures, but you can’t really wait until turn five to play out your threats. However, if you can play this while you have a board presence, it will make it tough for your opponent to clear your side of the battlefield.

The next card I want to look at uses your graveyard as a resource to create Zombies. Here is Graveyard Marshal: 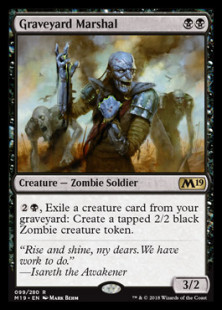 While Open the Graves gives you a way to replace destroyed creatures with 2/2 Zombies, Graveyard Marshal will use those departed creatures to create even more 2/2 Zombies.

To start off, you get a solid 3/2 Zombie creature for just two mana. Plus this card gets more value for every creature that you have, and there are plenty of ways to get those creatures into your graveyard. If you can fill up your graveyard, your Graveyard Marshall will have plenty of food available. The fact that the Zombie tokens come onto the battlefield tapped isn’t the best when it comes to defending yourself, but really, do Zombies like to block?

Finally, we arrive at the dark lady herself, Liliana. She's back with Zombies on the brain for lunch, and for dinner. Here is Liliana, Untouched by Death: 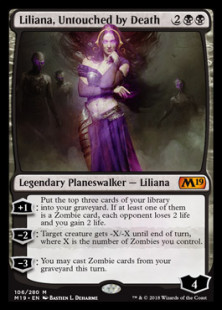 This is the most deck-centric Planeswalker that I have ever seen. It is made to succeed in a Zombie deck, but outside of that, won’t be played. Can its value in one deck make it worthwhile? Let me break down these abilities for Liliana, Untouched by Death.

Let’s say you have 20 Zombies in your deck. Your success rate for draining life will be 70.4%, which isn’t too bad. Let’s look at how many Zombies this ability can get into your graveyard.

Odds are that you'll get one Zombie in your graveyard with each use of this ability, with a chance to get two or more 25.9% of the time. Filling your graveyard with Zombies will help creatures like Graveyard Marshall who want them there to make tokens. It also helps Liliana, Untouched by Death, but we'll get to that in a moment.

[-2]: Target creature gets -X/-X until end of turn, where X is the number of Zombies you control. – This can be a great removal ability, but it's completely dependant on the state of your current battlefield. If your battlefield is empty, this is a dead ability. I personally don’t see this ability seeing much use, as you'll most often want to focus on the first and third ability instead.

[-3]: You may cast Zombie cards from your graveyard this turn. – This ability makes the first one much better. If you fill your graveyard with Zombies, you can then have a turn when you cast them all like a bunch of extra cards in your hand. There are turns where you might even be able to cast three to four Zombies in one turn. It’s great that this ability can be used on the same turn that you cast Liliana, Untouched by Death, though you will have less mana to use.

Zombies are back in full force in Core 2019, but will they see themselves back in the Standard spotlight like back in Amonkhet? Some key pieces are still around in the form of Lord of the Accursed, but there are some pieces missing as well. We will see if these new additions from Core 2019 will help them out.