If you're a loyal reader, you're probably wondering where the improvement article is today. Fear not, it hasn't been stopped, but instead just paused as we prepare to take down the latest competitive tournaments that are coming up.

GP Richmond, Beijing and Bologna is this weekend and if you need a primer on how to do well at your local Grand Prix, you've come to the right place!

Before we start talking about how to build your sealed decks, let's go over Amonkhet's mechanics: 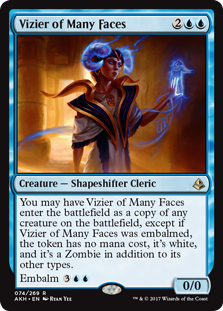 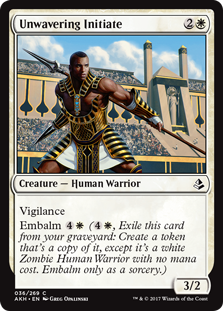 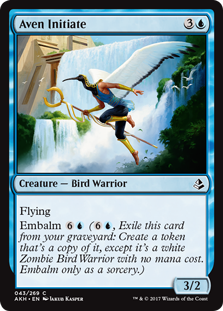 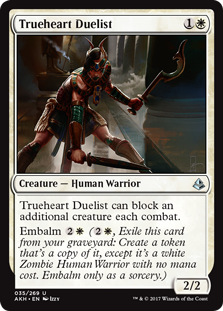 Embalm works similarly to flashbacking a creature card from the graveyard by paying the embalm cost on the card. As "embalming" a creature is an ability, it cannot be counterspelled and the creature token that is created will become a Zombie. There are 15 embalm creatures in the set (1 mythic, 5 rares, 4 uncommons, 5 commons) and 13/15 of them are within the UW archetype.

Embalm costs are typically somewhere between 1.5 to twice the cost of the original card. This makes it relatively slow in draft and you may not have time to embalm all of your creatures. However, in sealed this mechanic is just fast and grindy enough to take over the late game. As such, any reasonable embalm card should be played, which is everything but Anointer Priest and Sacred Cat. Bounce effects are much better in this format because of the Embalm mechanic.

There are many tokens that are being thrown about for embalming, but I typically just unsleeve a card half-way to indicate that it's embalmed. 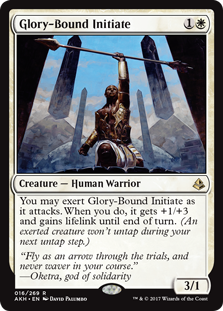 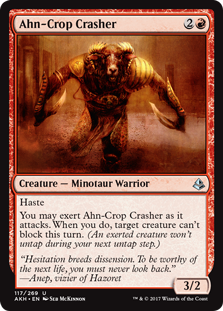 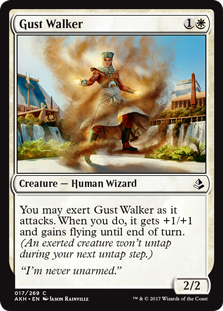 Creatures have additional abilities in Amonkhet that can be triggered by announcing that they'll stay tapped on your next turn when you attack with them. This is known as the exert mechanic and typically it's better in a draft format as the game will end much faster. The best exert cards are ones that are great on their own, like the cards above, but then have an additional bonus that can be used in a pinch, if necessary.

There are many tokens that are being thrown about for exerting, but I typically just unsleeve the card half-way to indicate that it's exerted since no single card has both embalm and exert. 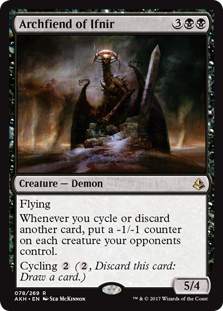 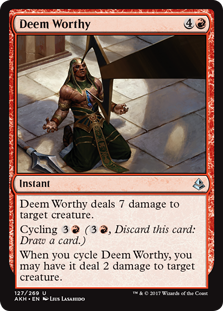 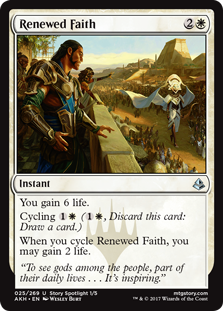 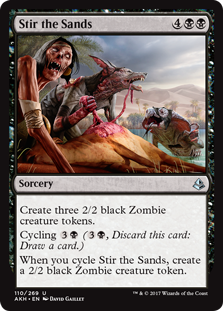 Cycling's back?!?! This is a great mechanic as it allows you to include Swiss-army knife type cards in your deck. This allows you to play less than the normal amount of lands you're used to. Typically a sealed format will run anywhere between 17-18 lands, but if most of your high-end cards have cycling you can feel free to run 15-16 lands.

On the bright side, if you're short on playables, you can play off-colour cantrips in the form of Cycling 2, rather than play cards that are absolutely horrendous.

Aftermath spells have an alternative flashback cost. Most of these cards work very well together and generate extra advantage. If you're able to play the front half of an Aftermath card, that's usually enough to warrant its inclusion. I consider the back-half of the aftermath cards to be free splashes that can work off a Painted Bluffs.

Now that we have all the mechanics out of the way, let's get to the sealed format.

There's a large difference between the power level of the rares/mythics in this set and the other cards, so keep this in mind when building your pool. However, it's still important when ranking the colours in your pool to focus on the commons first and then the uncommons. This makes sense considering that each sealed pool will have 6 rares/mythics, 18 uncommons,  and a whopping 66 commons. Here is the breakdown of the typical commons found in each colour in Amonkhet:

Since we've already decided that this is a midrange format, we need to focus on utilizing the colours that line up very well with that. This makes Black, Blue and Green your ideal colours for the sealed format. This is very different from the draft format, where blue is terrible and red and white are stellar.

Applying it all to your Sealed Build:

As with most sealed formats, you're at the mercy of what cards you open. While it's incredibly rare to open a hyper-aggressive pool, it is ideal for this format as most players will be spending their time durdling around in the first few turns. Most of the pools you open will have a mixture of midrange and control, and you should focus on only including cards that fit with this theme.

Don't try to get overzealous and include over 3 colours in your deck as the power level of your deck can never overtake the inconsistency issues that you will have. Here are the common fixers in Amonkhet: 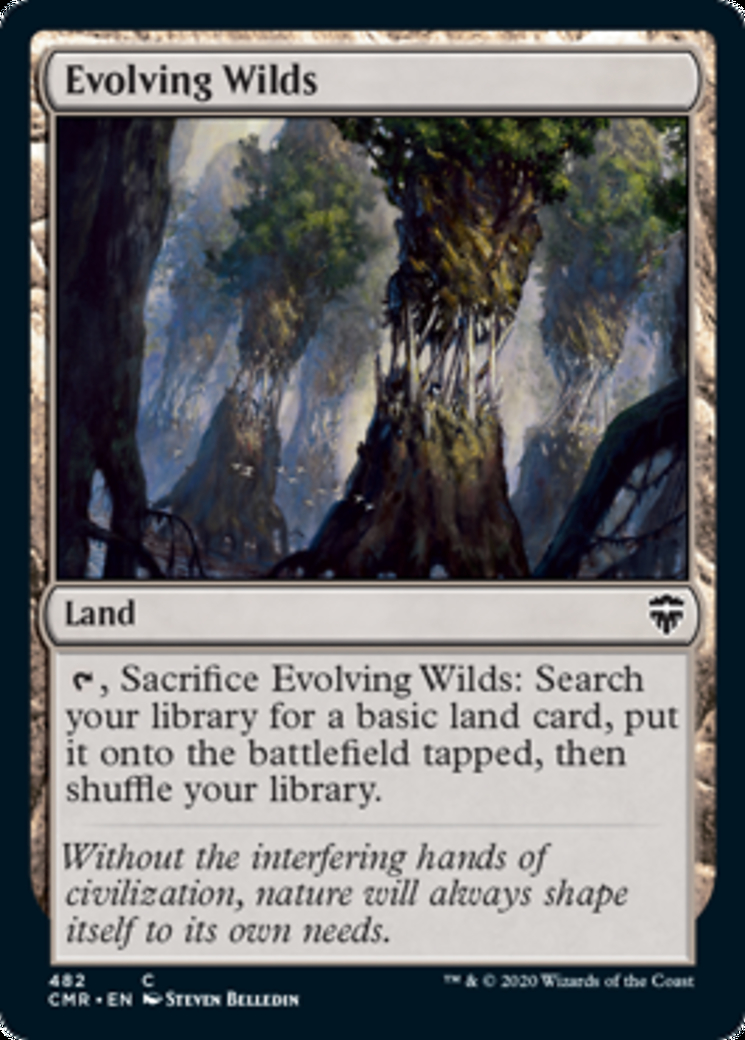 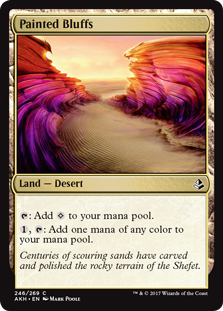 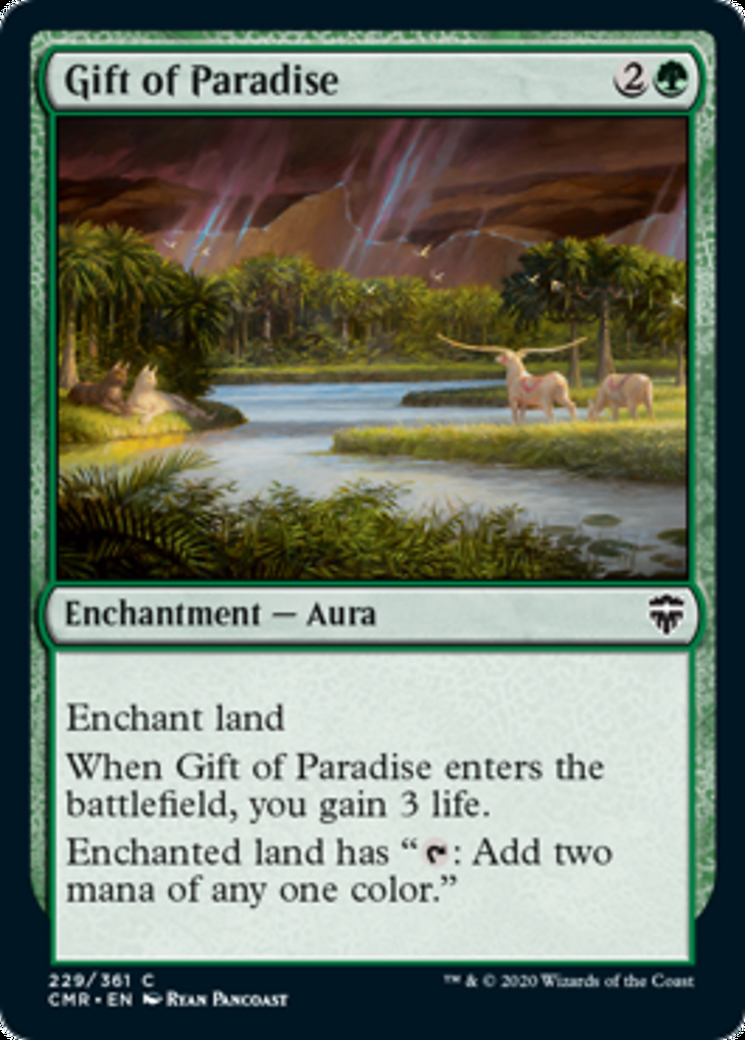 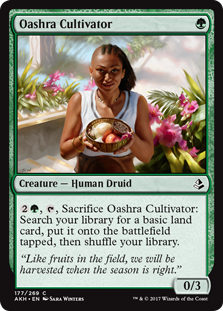 As you can see there isn't much good fixing. To that end, I would recommend that you only play 2 colours with a light splash if possible.

In sealed, you'll want to play all of your biggest (best) creatures, removal and evasion so that you can breakthrough board stalls. Green is very good at making the best creatures that are rarely made obsolete by other creatures. I would try to find at least 8-10 cards in each main colour to justify its inclusion. As I stated before, you need to avoid playing very aggressive creatures alongside slower big ones.

Depending on the quality of the sealed pool you open, you may not have to play more than 2 colours. However, most pools in this format will give you about 18-20 good cards in two colours. This gives you approximately 4-6 more cards that you will have to put into your deck. You can either do one of two things:

3) Splash powerful cards (this is the typical option that I would suggest, where you splash cards. Bonus points if your splash card can also cycle such as Wander in Death which is one of the most underrated cards in sealed at the moment)

Also, let me know what you think about my thoughts on Amonkhet sealed and if you agree or disagree. Post in the comments below or tweet at me (@SammyTMTG). And, if you want to keep up with my articles and happenings, please make sure you hit the follow button for Twitter @ SammyTMTG. I’ll see you next week for another article on improving your magical skills!