Going for the Gold - HOU To Solve The New Limited Format

With the release of Hour of Devastation, players are scrambling to grab all the latest and greatest cards to get ready for the newest rendition of Standard. Make sure that when you're trying to pick up cards that you check out the Wizard Tower's store, as they have a great selection and a lot of great deals.

Without a doubt, my favourite part of a new set release is learning the new limited format. This is especially rewarded by the Premier Play team with Limited Grand Prix being hosted a week before the next Pro Tour. This coming weekend are a pair of Grand Prix in Toronto and Kyoto. Most of you reading this are probably attending one of them, so keep reading as I have some insight on this sealed format that I'd love to share.

Since I'll be attending Pro Tour Kyoto, I bought a laptop just for Magic Online so that I can do a lot of Limited testing. I have played about 20 Sealed Leagues and 15 Drafts at this point, so my opinion can definitely change, especially once I see what the rest of the pro community is doing.

Just like with Amonkhet, you want to make sure that you're not attacking, but instead playing as controlling as possible. Here are the top things I would recommend you consider for your sealed deck this weekend:

1)  Try to play colours within the Sultai shard. Red and white cards tend to be very aggressive in nature and typically do not contain too many late game cards.

2) Don't play many two-drop creatures, unless you have a really fast and succinct 24 spell and 16 land deck. Anything beyond this, and only play creatures that are good in the late game as well as the early game. Against the aggressive decks of the format, you can bring in more two-drop creatures to trade early.

3) Unlike the previous format, splashing is highly incentivized since there are so many options for mana fixing. I have sometimes played two main colours with two light splashes due to the existence of Beneath the Sands, Traveler's Amulet, and Oasis Ritualist

4) Always chose to be on the play. There are so many abilities that favour the person who's on the play/attacking.

5) Consider what your sideboard contains and always have a sideboard plan available. There are so many cards that are terrible maindeck, like the uncommon cycle of Defeats. However, after sideboard these cards are great, with the exception of Nissa's Defeat. PS: Don't cast your Gift of Paradise on a Forest in the green mirror.

6) Do not play less than 16 lands. There are so many cycle lands and other mana fixers, and your decks will have a lot more use for the mana. Don't be one of those people who are frustrated from constantly being short mana to cast the spells in their hand.

What about when you make Day Two?

Oh no! You just spent so much time making sure that you knew what to do in Sealed, but can't Draft your way out of a paper bag. Don't worry I got you covered!

Similar to Amonkhet Draft, you're better off playing an aggressive deck than a control deck. This makes the red, black and white colours the ones that you want to be in. That's not to say that you can't build a synergistic GW exert deck or a UR spell deck though.

I suggest trying to stay open as long as possible and, outside of opening bomb Rares and Uncommons (which every other writer is covering), you want to make sure you know what the best Commons are. I have listed them below in the order of preference within each colour. 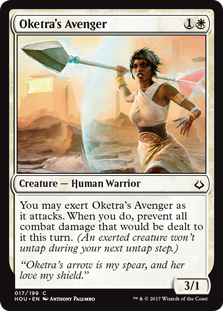 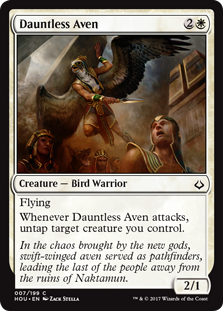 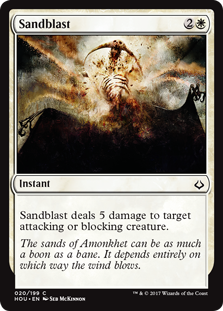 In Amonkhet, Gust Walker was king. Nothing much has changed and another two-drop has taken the top white common slot in the form of Oketra's Avenger. It might as well have evasion since it attacks with impunity into its foes. Dauntless Aven is an evasion creature that lets you get multiple uses out of your Exert creatures. Finally, Sandblast is just a better version of Impeccable Timing as it takes down bigger creatures like Colossapede 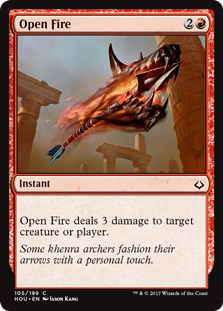 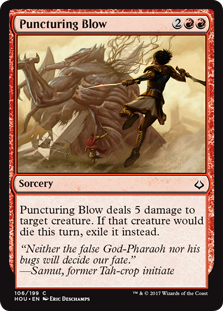 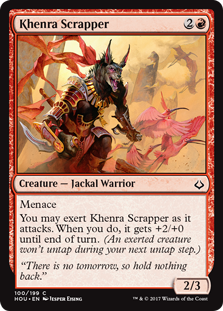 Red has a pair of really good removal spells in this format and is very deep in this format. There are many good four-drops in this format, so whenever I have the opportunity I take the cheaper spell so that my four-drop slot is not clogged. Khenra Scrapper has evasion due to menace but then can typically trade with two of your opponent's creatures. 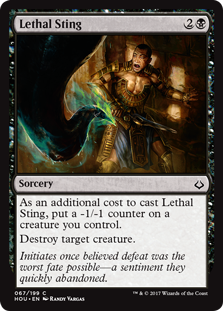 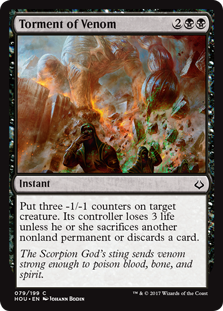 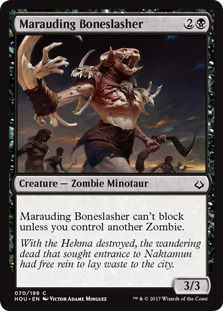 Black also has a pair of good removal spells. While they're not as good as what red gets, it does play along with the counter subtheme of the format. Finally a 3/3 zombie for three is nothing to write home about, but black's commons are pretty shallow in this set. 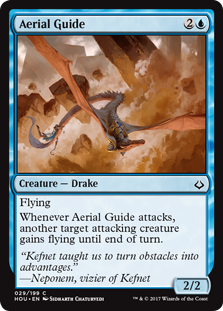 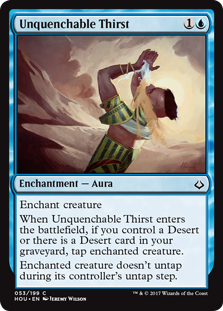 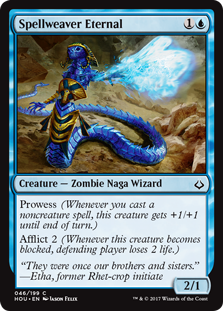 Aerial Guide gives your best non-evasive threat evasion, while Unquenchable Thirst is a great removal spell especially in combination with the common deserts that are easy to find in HOU and AKH. Finally, Spellweaver Eternal has two abilities, who knew? A 2/1 prowess creature for two is playable, but with Afflict 2 this card is incredible. 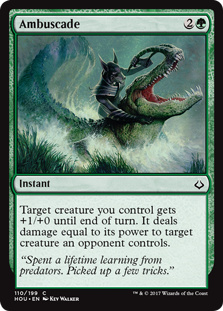 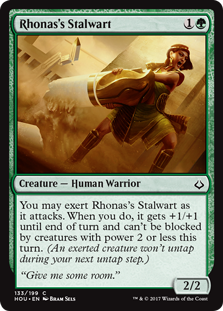 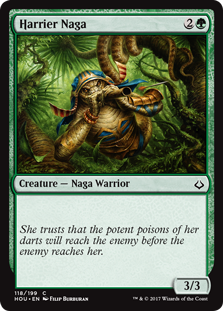 Green's top Common is a removal spell (Ambuscade) that takes advantage of the big size of their creatures. On rare occasions you are able to use the +1/+0 to trade up your creature as well. Unlike the normal fight spells, this is just a bully! Rhonas's Stalwart is an incredible two-drop that has so much utility in the late game. Nessian Courser is still good in Harrier Naga.

So there you have it, Sammy T's current pick orders for the HOU HOU AKH draft format!

What do you think of my pick orders, and what would you change? Post it in the comments below or tweet at me (@SammyTMTG). And, if you want to keep up with my articles and happenings, please make sure you hit the follow button on Twitter. I’ll see you next week and until then, have a great weekend!