Going for the Gold: Team Limited in Columbus (27th)

The last weekend of April was the first set of team limited Grand Prix in Dominaria. Either Grand Prix Columbus or Grand Prix Bologna, depending on which side of the world you are on. And it was quite a showing. So many great teams showed up to transform eight Dominaria boosters into three playable limited decks complete with sideboards.

Since I haven't played competitive Magic in the last few months I've been pretty rusty. I was teaming with none other than the infamous Gerard Fabiano and Dustin Stern (of Twitter fame). We each had agreed to complete multiple Sealed and Draft leagues on Magic Online prior to the tournament. Thanks to Jake Mondello, who I've been working with as I prepare for the upcoming Pro Tour, I've gotten a lot of practice in this limited format.

I won't repeat what my thoughts of Dominaria limited are, besides that the slower sealed deck format is all about playing your best cards while the faster draft format is all about synergy between cards. If you haven't heard my thoughts yet, I've written two articles so far that you can find here and here. Team Sealed is equivalent to the Draft format so I knew that we would want to be playing synergistic decks when possible and aligning our premium cards to best achieve this outcome.

I was fortunate to be able to grab a ride down to Columbus on Friday with my good friends Dan MacDonald and Derek Pite (you probably know him as trophy leader of yesteryear's misplacedginger). There are really two ways to get to the US from Toronto. You can either drive through Niagara Falls which will take you to New York, or you can drive through Windsor which takes you through Detroit. Columbus was closer to Detroit and I was excited at the possibility of stopping at the casino, which got quickly veto'ed.

After an easy border crossing and some gas stops we stopped at this place called Shake Shack a few hours away from Columbus. If you haven't checked it out, it's an awesome burger joint that also does shakes and has a very Archie comic-esque feel to it. There are apparently a ton of them across the US.

After lunch, we stopped by a Walmart so that we could pick up snacks and water for the entire weekend. Dan and I actually stumbled upon two Super NES Classics (they come pre-installed with 20 classic games) that were still in stock and we each bought one, since they sold out so fast in Canada. Currently, I'm playing a couple hours on it a day since I'm a huge fan of the games from my childhood.

We arrived in Columbus at 4 pm and I split up with the guys so that I could check into my hotel. I was staying at the Crowne Plaza and after I dropped off my stuff and got multiple keys for my team, I headed to the event site. I met up with Dustin there and found out that Gerard was delayed by about 12 hours. We built a practice Team Sealed with Andrew Baeckstrom and played against Corey Burkhart, Ben Rubin, and Rich Hoaen. We learned a lot about some fundamental mistakes that we made in deckbuilding since we got trounced easily.

After leaving the event site, Dan and I headed to the Hollywood casino (only a five minute drive away) and played $1/$2 No Limit Hold'em until midnight. Had I not made some ill convinced bluffs while not realizing that my table was full of nits (players who play super tight), I would have been even more profitable on the night. After the casino, Dan dropped me off at my hotel where Gerard arrived 10 minutes later.

We regrouped and went to bed and were ready to crush the sealed tournament... hopefully.

The Tournament - Day One

I've opened so many Sealed decks in my lifetime, but I still got super nervous as we open our pool. We were either really lucky or really screwed for the tournament. Typically, you feel worse about your pools than it usually is. Even the best of us are not immune to it. I didn't record our pool, but Dustin did take photos of the decks that we ended up on. Our pool was pretty mediocre and we realized it as we were watching the people across from us verify our card contents. I was hoping the entire time that there would notice something so egregious that the judge would have no choice but to give us a new pool. There are no byes in Team Sealed, which means that you have to play all eight rounds. That meant that it would be much tougher to hit the requisite threshold and advance into day two.

Looking back at our pool, of the best commons we had these:
1 Eviscerate, 1 Shivan Fire, 1 Fiery Intervention, 1 Gideon's Reproach, 1 Blessed Light, 2 Baloth Gorger, 2 Academy Journeymage

So think about what we were missing!

The first thing that we set out to do was find what the most synergistic deck in our pool was that could use the least number of good cards. We realized that we had the core of a semi-decent UW historic deck with three copies of Relic Runner and Aesthir Glider. It only had one copy of the D'Avenant Trapper but you know what they say... beggars can't be choosers.

Thankfully we had some good historic cards that could also fill the gaps and had to play a Triumph of Gerrard (ironically as the 24th card). Since I had a lot of experience playing this aggressive archetype and was sitting in the middle as the team coach, I was given this deck to pilot in Seat B. 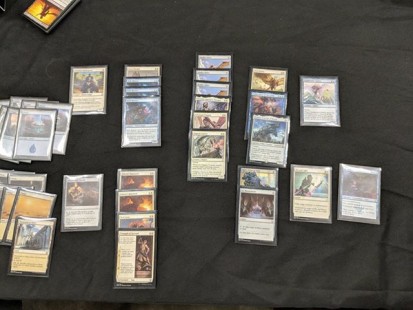 We built a G/B saporling deck that did have two copies of Sporecrown Thallid, the Fungal lord. It only had two real removal spells. These had to be leveraged efficiently because this deck could not win very fast. We agreed that Dustin should pilot this deck in Seat C. 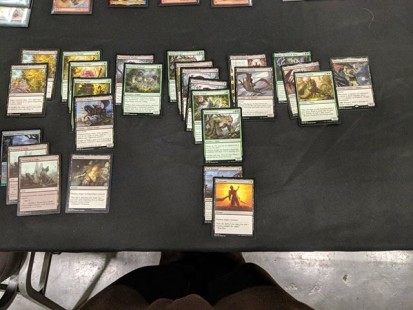 Finally, we put the majority of our good red and blue cards in the Wizard deck that Gerard piloted in Seat A. This deck had a transformational sideboard based on the potential matchups that we expected to face, where we would take out some of the cheaper creatures for some more late game oomph. 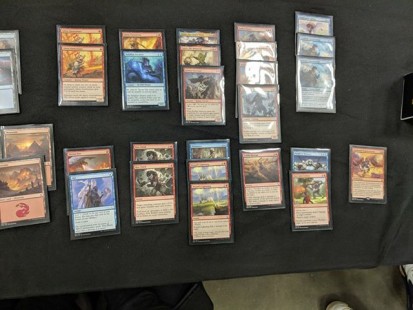 We would start off the tournament 4-0, before losing Round Five and Round Six. Ironically, the finals of this Grand Prix was played between our Round 5 and 6 opponents. I guess we did better than we thought on Day One. After our second straight loss, we went to the cafeteria and had multiple ice creams to bolster our spirits. We came back and were able to secure victory in the last two rounds to finish at 6-2 and advance to Day Two.

We went our separate ways for dinner with our different friend groups. After dinner, Dan and I went back to the casino where we stayed until 5 am playing more $1/$2 No Limit Hold'Em. Man, that game is super addictive.

Wanting to get some sleep before day two, I went back to my room. To my surprise, both of my teammates were awake. We chatted for a bit before I took my "two hour nap".

Our sealed pool was much better on Day Two, but that wasn't much of a horse race. On Day Two, they drop two sealed decks in front of you and whoever reaches for one first gets it. Unfortunately, Dustin reached for the sealed pool that was remaining after the team across from us picked theirs. They ended up getting nothing short of all bombs and great commons. They had four copies of most of the best cards and my jaw dropped as we verified their pool.

That could have been ours!

We ended up building our three decks that have been forever lost in time since we didn't take photos of them. Gerard played a G/B Saproling deck and unfortunately got paired against the mirror multiple times while having an inferior deck. I played a U/R aggressive Wizards deck that was able to curve out opponents, but it didn't have much of a late game. Finally, Dustin played a three-colour historic deck that functioned more like a control deck than an aggressive deck. We were able to finish our last six rounds with three wins, two losses, and a draw.

Unfortunately, we finished up in 27th place; three places away from a cash finish. On the bright side, this was way better than we expected to finish considering the quality of the pools we opened. Hopefully things will go better in Toronto and DC!