(Bridge Vine is nutter-butters, and I actually do get lucky sometimes!)

On August 5th, I competed in FaceToFace Games Toronto's Modern PPTQ 1K, and DANG! It was certainly a hot one!

If you've never been to F2F Toronto, it's a decent sized space above a Pizza Pizza on the Danforth. Unfortunately this story has a negative start as there were so many players, that not all got in. I was lucky enough to be included in the tournament as a non-pre-registrant. These PPTQ's seem to be hitting capacity more and more in the Toronto area.

Anyway, just to say we could, we crammed 71 hopefuls into F2F's wonderful lofty space. This certainly made for less than perfect conditions. It was hot and crowded but I'm sure most of us were just happy to be there for our 1-in-71 shot at making the RPTQ. 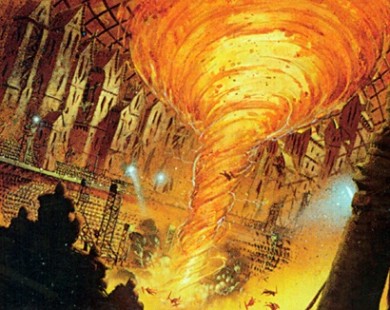 Actual photo of the room we played in. 🙂

All jokes aside, I love F2F even when it's full. They have ice cream for a reason.

I'm not one to start off tournaments with a bang; I tend to reach bubble-territory more often than not, and manage to squeak in to top cuts. This time, I was able to rattle off four wins before getting stone-walled twice in a row. Luckily, I was the only player in my point bracket to make Top 8, thanks to the success of my opponents as well. (I'm looking at you Chris Ha).

Nobody really wants to read a traditional tournament report from a Burn player, so my focus is more on the character building and attitude moderation this time around.

Here's what I ran with:

Match-up were as follows:

R5 - lost to 5c Humans in two (4-1) - Super nice dude, absolutely dummied me. He went on to win the PPTQ, kudos to Logan Grawbarger.

R6 - lost to Ad Nauseam in three (4-2) - This was a friend of a friend, Alex, who I knew was playing Ad Nauseam. I knew this was going to be a difficult one, and I'm really surprised I was able to take it to three. Unfortunately in Game 3, I kept two Destructive Revelrys on a one-lander because I'm REALLY greedy. I had the right idea and was feeling the lady luck; but it had to run out sometime. Alex ended up making the Top 8 as well and is known to be a great Judge in the area.

R7 - beat UR Delver in two (5-2) - The deck was neat but my opponent had a few turns of poor draws, against my super-intricate plan of stringing bolt effects together. In all honesty, I think Hayden had ... seven failed delver flips over our two games? Nothing was going his way and my deck just drew reasonably.

It's at this point it was a nail-biting cut to Top 8 and I was successful at squeaking in with 15 match points. WHEW! If only I knew what would ensue.

I find I struggle sometimes with my attitude as a Magic player. A lot of us struggle to keep our egos intact, and it's easy to get salty when you get a poor draw, or tons of lands, all the typical excuses. I love this match's results because I feel it really helped me in my development as a player. Here's what happened: 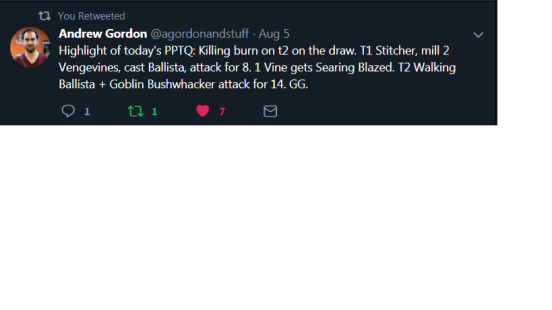 You heard it here first (not actually), Bridge Vine can get'ya on turn two in Modern. Just like that. My response was super easy going and I think Andrew really appreciated that. After all, there's nothing I could have done there - the Magic God's smiled upon Andrew. I didn't make any mistakes, therefore I should still be proud of myself.

Oh, also, when you miracle-5 someone to the face when they think they've outright won the game, it doesn't always make for pleasant interactions between games. I'm certainly not the only one out here getting salty, haha. 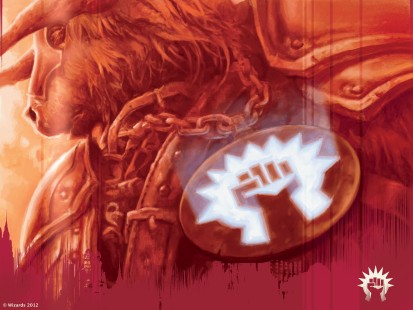 Opponent upset? Just use some of that Boros Charm! 😉

I decided I'd just take this one as best I can and grow from it. There will be lots of other chances for me, I know this. Every once in a while a humbling experience is just what the doctor ordered.

When it really comes down to it, I got lucky a few times with Thunderous Wrath and won games I had no business winning. I didn't particularly deserve to even be in the Top 8 because of skilful plays. I also think it's absolutely AMAZING that I never once had Thunderous Wrath in an opening hand, never in a mullied opening hand, and never drew it as a first card (on the draw, with no mana to miracle cast). One time it was close and I got to miracle it as the second card I drew on the play, whew. Cat's out of the bag on that one.

I had a great day as always at one of my favourite Magic stores and got to see a good deal of friends. As said earlier, it was hot, it was long, but it's always worth it. FaceToFace Games is literally the heart and soul of Toronto/GTA Magic and they always put on a great tournament. Maybe we'll get em' next time.

Questions? Comments? Suggestions?
Hit up the comments box below!