If you were going to give a trophy to the least lucky person on Earth, you would have to give that trophy to a person who had just snatched defeat from the jaws of victory, and if you didn’t give it to them, they were the sort of person who would find another way to miss out on a trophy. Losing focus, losing track of the game state, and sequencing incorrectly. It is really a shame that I must describe these things to you, because there are enough bad beats and top decks in this story without even mentioning such unpleasant things.

Recently, at one of the most high-profile events in Magic, a sequencing error cost a player victory in the penultimate game of the match. His opponent had no such problem, and played to his outs to seal up the game and, a short time later (spoiler alert!), the entire Pro Tour.

At what I like to call Pro Tour Hazoret, the fifth game of the semi-finals came down to a missed opportunity.

Yam Wing Chun, in his excitement over drawing the card that would guarantee his victory made a sequencing error by moving to his combat phase, and attempting to declare Hazoret the Fervent as an attacker while still having two cards in his hand. Unfortunately, Hazoret can only attack if you have one or fewer cards in hand. If he had cast even one burn spell prior to combat, he could have attacked and finished off his opponent with the other burn spell. Instead, his opponent saw the danger he was in and took a safer line of play that ensured Hazoret never dealt damage.

A few short turns later, his opponent sealed up the game. It was an unfortunate end of the event for Yam Wing Chun, but it’s a great example of why sequencing matters, and it’s a good topic to discuss.

The intent here is not to single out the player, but to show that this can happen to anyone. This example stands out because it happened during a critical turn where the game should have ended. However, there are a lot of cases where messing up your sequencing isn't obvious, and can cause a game to be lost just as easily. Control players in Legacy can probably relate to this since every decision matters down to what fetchland you play and which land you fetch with it. When I played Miracles, I could often trace back a loss to a sequencing decision I had made earlier in the game, whether it was fetching the wrong land, or even using a Brainstorm needlessly.

There are plenty of examples of good and bad sequencing in every format. The most basic sequence is playing your lands out correctly since you want to be able to curve out and play all of your spells. From lands that come into play tapped, or tapping your mana incorrectly, every decision can either eke out small advantages over a game, or sink your battleship before you even get started. 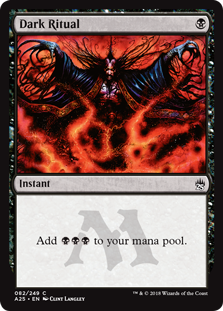 Storm decks try to end the game by playing a large number of spells in a single turn and finishing with a kill spell. Sometimes, the combination of cards in your hand is not quite enough to get the job done though. In these cases, you can try to bait your opponent into casting a spell as each one they cast can work against them.

I lost a game against a ANT player because I played a counterspell in response to his Duress effect. It tapped me out, and that took a lot of the sting out of the bluff that I was representing another counterspell. Worse, it added the one extra spell he needed to hit me with a lethal Tendrils of Agony when I would have survived otherwise. In that scenario, the correct play would just be to hope they don’t have it and not add to the Storm count. 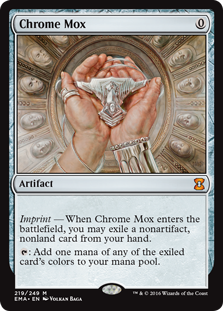 From my recent experience with The Epic Storm here and here, I had some interesting sequencing plays from the Storm side.

In a post-board game, the only thing I had on the field was an untapped Swamp, but I was holding a Chrome Mox and two Dark Rituals. By not playing out the Chrome Mox first, I tried to bait my opponent by tapping my last land and casting the first Dark Ritual. It worked, and my opponent pitched a blue card to his Force of Will to counter my attempt to combo off. This brought my opponent down to four cards in hand, and added to my Storm count.

I think it's correct to go for it in that situation. It was only the second turn of the game, and the odds were low of a second Force of Will. Sometimes, you just have to make them have it or not.

That exact scenario repeated itself versus another opponent in the same tournament in a post-board game. I tapped out and baited the Force of Will with a Dark Ritual and he countered it. I followed up with the Chrome Mox and a second Dark Ritual and managed to combo off for lethal damage. In both cases, I doubt that the player would have spent a Force of Will on the Dark Ritual if I didn’t sequence the spells to appear completely tapped out. It's reasonable to believe the Storm player's turn would end if the Dark Ritual didn’t resolve. 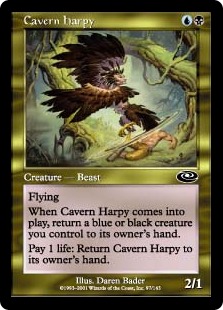 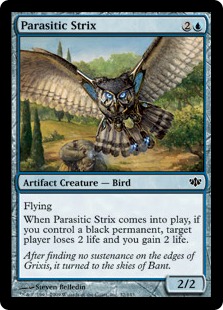 These two cards are the combo finish for the Aluren deck. Since Aluren grants each player the ability to cast any three or less converted mana cost creature at instant speed, you can keep bouncing the Parasitic Strix with the Cavern Harpy and re-playing it to drain the opponent’s life total to zero. Without counter magic, it’s difficult to stop, and it would usually require multiple removal spells.

The sequencing of this particular game was mildly awkward, especially as the Aluren player knew the proper sequence to play his spells in, but didn’t. After Aluren resolved, the first creature played was Leovold, Emissary of Trest. This put a creature into play that was black and satisfied the requirement of Parasitic Strix’s drain life trigger. The second creature played was the Strix. Then the third creature was the Cavern Harpy.

Because of this sequencing, the opponent was then able to point a Lightning Bolt at the Strix with the Harpy still on the stack and no bounce trigger. This could have been the TSN turning point of the game! Instead, the Leovold draw trigger from targeting the Strix resulted in a second Cavern Harpy as the card drawn. It was promptly cast to bounce the Strix and continue the combo for the win.

This last scenario resulted in some consternation at the lucky draw off the Leovold. Honestly, it was the best possible draw, but there were a lot of other good ones too. However, it could all have been avoided by proper sequencing. Playing the Cavern Harpy first, putting its bounce trigger on the stack, and then playing the Parasitic Strix is the proper sequence. This would have negated any chance of a Lightning Bolt being able to interrupt the combo. You could just return the Harpy to hand, and replay it to bounce the Strix before the Bolt can resolve.

Given the angst such games cause us Magic players, doing a lighthearted spoof of Lemony Snicket’s A Series of Unfortunate Events felt like a good way to go. It’s a children’s book, and Magic is often stated to be a children’s game. Don’t let errors like sequencing mistakes get you down, but remember them, and try to do better next time.

Until then, don’t let Count Olaf get the best of you! (Be like Bing and ♫Accentuate the Positive!♫)