I'm sitting here with the Top 8 going on about 40 meters away...

It's been an intense weekend - Tons of innovation and breakout cards have been seen. Explosive blowouts and grindy matchups.. what else could you possibly want in a format?

Personally, I've gained a new respect for the Block Constructed format. In previous years, the decks I've seen never really inspired me to explore new cards - they were basically just the obvious good cards, in an obvious shell.

This Pro Tour had its share of obvious inclusions - Elspeth, Sun's Champion, Hero's Downfall - but there has been so much innovation, and exploration of the mechanics, I can't help but be excited to play Constructed and try some of them out for myself.

Who would've guessed that Psychic Intrusion and Doomwake Giant would have such an impact on the format! It's also quite clear that Ajani, Mentor of Heroes is the real deal, not to mention Kiora, the Crashing Wave. WotC seems to have found the sweetspot for Planeswalker design. They have interesting abilities, but don't turn the entire format in to a race to see who can play the first Jace, the Mind Sculptor.

While Elspeth, Sun's Champion clearly stole the spotlight for Planeswalkers, the unsung hero (or villain) is definitely: 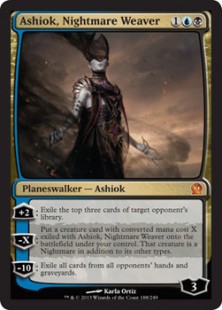 Ashiok, the Nightmare Weaver has proven itself an excellent card in the Midrange mirrors. The ability to add a difficult to remove threat (sans Hero's Downfall) early in the game that can provide incremental card advantage throughout the game, and if left unchecked, actually end the game itself, is invaluable.

Another successful archetype this weekend was the Big Naya deck (also referred to as RGElspeth). Featuring cards like Stormbreath Dragon, Polis Crusher and.. to no one's surprise - Elspeth, Sun's Champion. In a format full of Enchantments, Polis Crusher is an all-star. With a reasonable 4/4 Trample Body to begin with, and also having protection from Enchantments, you have a playable card all by itself. But as soon as it becomes monstrous, it has the ability to dominate the opponents board in a matter of one or two hits. If Enchantments remain as prevalent in Constructed as they are now, expect to see more of this guy! 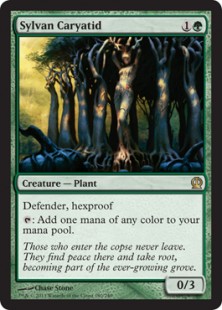 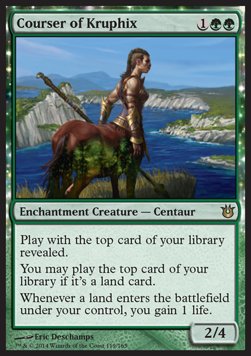 -Sylvan Caryatid and Courser of Kruphix-

These two cards, while obviously quite different, offer some similar benefits. Both cards bring resiliency against aggressive decks. Sylvan Caryatid is a difficult, if not impossible to remove blocker early game, while doubling up as an accelerant to your larger spells and adding consistency to your Mana. Courser of Kruphix comes down and from that point on provides an excellent 2/4 blocker, card advantage, and life gain - it's not surprising that with so many decks playing these cards, aggressive strategies had a hard time pushing through. Courser of Kruphix's dimensions go much deeper, however, once you add Scry Lands in to the mix. Having to reveal the top card of your deck does give your opponent invaluable information, but it also gives you the chance to "Next Level" your opponent by holding cards early in the game they don't know you have. The deck manipulation becomes incredibly powerful when you combine Scry lands with the Courser, and almost encourages you to play more lands in your deck. I am certain that over the next year and a half, both of these cards will be integral pieces of many Standard strategies (and Courser of Kruphix has even shown up in Modern!).