Greetings and welcome in for the 16th instalment of The Modern Rogue Report!

I'm Cody and this week I spent some time on skill building. As a competitive player, I've been known to err on the jankier side of things, but I've always played someone else's strategies and tweaked them to my liking. It's about time I started trying to bring some of my own original concepts to life.

As I've said before, one of the things I appreciate the most about Magic: the Gathering that is a player's ability to personally develop and exhibit artistry in their deck-building and play styles. I've always written things down on pieces of paper like "Modern Maze's End" and never brought them to fruition. I have a great cast of friends and confidants who can help me tweak my ideas, so ultimately I decided to take the leap.

It's relatively easy to focus on the things you're good at in Magic and forget to work on building other skills. By trade, I'm a constructed player; I love Modern, I'm usually playing Standard even if I don't enjoy the format, and I play Legacy when I can. Recently, I played in a Sealed RPTQ (Regional Pro Tour Qualifier) and am not at ALL confident as a limited player. I found a lot of value in a few things I learned in the weeks leading up to that tournament and especially from skilled players at the RPTQ. Ultimately, this lead me to identifying other skills of mine that may or may not have been collecting dust for a while. 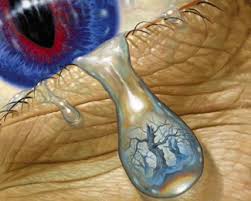 It started off as a much uglier beast than it is now. I had the idea of a Sultai "Ponza" style deck. Most people refer to land destruction these days, which I'm pretty sure is wrong (as I read somewhere original Ponza only had four Stone Rain), as Ponza. I was hoping to create the same effect in Sultai colours with effects like Rain of Tears, Spreading Seas, Sea's Claim, Contaminated Ground, and the like.

Originally this deck wasn't intended to be a competitive deck project, but that has since changed. I went from wanting to exploit cards like Urborg, Tomb of Yawgmoth and Spreading Algae to actually thinking this deck is pretty good and worth tuning.

So without further ado, here's what myself and a couple other minds have come up with:

First things first; yes. I think the idea is to take this deck in a more competitive direction.

There are a few restrictions though. I'm not using Jace, the Mind Sculptor or Liliana of the Veil / Liliana, the Last Hope / Snapcaster Mage.

The reason for this decision is that I was trying to keep this list not "budget-friendly", but personally budget friendly. I already have most of the pieces that I am currently working with, but don't foresee myself getting copies of Jace, Liliana, or Snap in the near future. I'm definitely open to exploring their potential role in this deck list in the future.

So what's exactly going on here? I guess the idea is to use Sea's Claim and Spreading Seas effects to lock your opponents lands down. Besides these "land-lock" spells, we also have Boomerang and Eye of Nowhere. It's worth noting that both of these spells bounce permanents, not just creatures. This can be handy against opposing Planeswalkers threatening to ultimate, attacking beaters, problem permanents such as artifacts/enchanments, etc. Also worth noting, is the fact that Boomerang is an instant and Eye of Nowhere is not. I've definitely made that mistake once.

Once we've gotten so ahead of the opponent in terms of usable mana, we can start to deploy heavier lock down pieces or threats. This can either be an Ashiok, Nightmare Weaver, which will be very difficult to beat playing from behind, or an Ensnaring Bridge to further the "stop playing Magic over there!" plan. 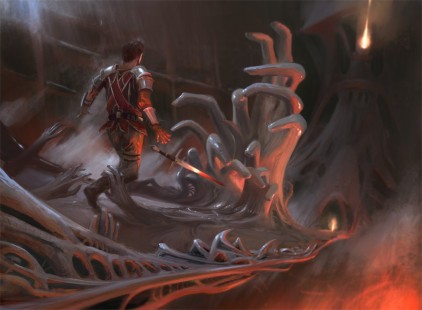 Beside Collective Brutality we have three Fatal Pushes for early creatures or as large as four-drops thanks to the use of an eight fetch land mana base and double Field of Ruins.

In the win-con department things are still pretty shaky; this is where we're currently at. Three Ashiok, Nightmare Weavers mean we can either eventually mill an opponent into exile, or use their creatures against them to pummel them out of the game. The problem with the latter is that we usually have an Ensnaring Bridge or two deployed. Sometimes to close the game, it'll be necessary to use Eye of Nowhere or Boomerang on your own Ensnaring Bridge. 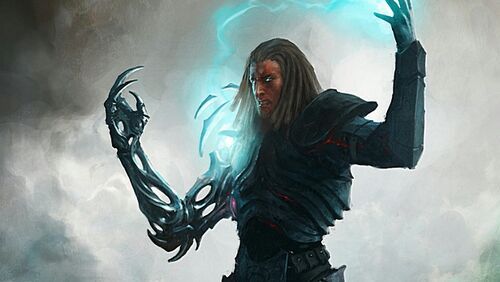 There are also two Tezzeret the Seeker in the main board. Tezzeret is kind of interesting here because we can use him to tutor an Ensnaring Bridge while still leaving him alive with one loyalty. We can also use his -x ability to go grab our one of Pithing Needle to stop a problem Planeswalker or activated ability in a pinch.

I had a really hard time coming up with another way to close the game but have somehow landed on Decimator Web. Tezzeret can -4, unfortunately sacrificing himself, but tutoring Decimator Web to the field. It takes a little while to do its thing, but at this point the game is pretty much under control.

Not that it should ever be relevant, but in one of the few practice games I've played with this deck it was necessary to activate Decimator Web then +1 a Tezzeret the Seeker just to untap the web and activate it again to speed the process up. The game ended that turn. Lastly, Tezzeret the Seeker can turn artifacts into 5/5's. Again the problem with this is that we play Ensnaring Bridge. There are still a few ways around it.

We can either do the old Boomerang my Ensnaring Bridge to attack with my Pithing Needle, or Bottled Cloister with our other Ensnaring Bridge (if at five cards in hand). Bottled Cloister kind of solves this problem on its own, though. Every opponent's upkeep we exile our hand face-down, thus defeating mid-game hand disruption. Strangely enough, this also gives targets for things like Wasteland Strangler, but since the cards are face-down, target selection will be randomized (I believe). With an active Ensnaring Bridge, this means that we will ALWAYS have zero cards in hand on the opponent's turn! That's convenient! 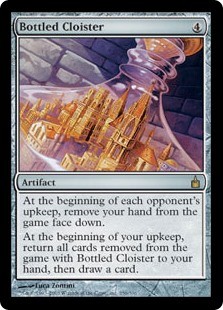 It's not just that, though. On our upkeep, we draw an extra card (something we previously didn't want to be doing) which helps keep our hand filled up around five cards so we can attack through our own Ensnaring Bridges if necessary.

I consulted Justin Friedel, a friend of mine and a deck doctor of sorts from Thunder Bay Ontario, who is very passionate about Magic theory. He's the admin of a group called "MTG Strategy Theory Group" on Facebook that's almost 400 members strong! Check them out here. There's usually daily card evaluation exercises and discussions on a wide array of topics.

Justin was instrumental in helping me trim an unnecessary colour, as well as tightening up the list with things like Collective Brutality in response to my "too many cards in hand" problem. Big thanks for the work you've helped put in thus far. As Justin mentioned, this deck is very strong in the main board against four of the top decks right now thanks to Ensnaring Bridge; Humans, Hollow One, Eldrazi Tron, and Bogles.

Also a special thanks goes out to LVL. 2 Neck-beard (as he calls himself) Kris Burningham for the help with the mana base. I'm notoriously terrible at figuring out mana bases, and while I'm sure our current configuration isn't perfect, it's a heck of a lot better than it was days ago!

This deck is like a weird hybrid Tezzerator deck, with some Owling Mine bounce-permanent tendencies. It can be incredibly annoying to play against and very much resembles prison-style decks.

What do you think so far?

Have any ideas for a side board for this deck?

Did we miss anything that should be in the main?

How do you think the deck changes if we decide to try including Liliana, Jace and/or Snapcaster Mage?

Thanks for dropping by for 16th instalment of The Modern Rogue Report! Please like/share or comment below!

Ps. I'm brand new to the Twitter world! I don't "Tweet" often, but maybe we could connect there?
Check it out!