Welcome back for the thirteenth instalment of The Rogue Report! I'm Cody, and this week I promised I'd get back to the competitive side of things. I've been personally performing well with 8-whack and having a blast. It's a cheap deck, it performs well, it's consistent, and it definitely doesn't get the respect it deserves. So for today, it's all about celebrating and paying homage to my absolute favourite tribe in Magic: Goblins! 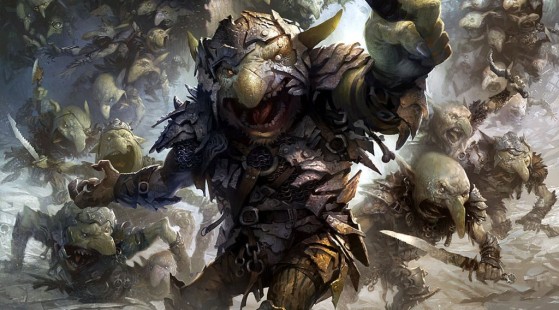 To be fair, I've only played the deck a few times recently but it's been nothing less than completely enjoyable. I've definitely been able to navigate games that seemed lost to surprising victories, and am slowly being convinced of 8-Whack's validity in the Modern format. It has the potential to stick around.

For anyone who is unfamiliar, 8-Whack is a title that references the 8-Rack deck that plays eight versions of The Rack's effect. This is the short, ugly, mutated cousin of that, with eight "Bushwhacker" effects in it.

The deck utilises Goblin Bushwhacker and Reckless Bushwhacker in combination with some cheap goblin allies that pack a wild punch! Not only do you have a slew of cheap, effective creatures, but there's also a great burn package that can clean up games out of nowhere. This package usually consists of four copies of Goblin Grenade and four Lightning Bolts.

Here's the list I played yesterday at a local Modern league. I ended up at 4-0 with a couple small strokes of luck and a few good decisions. This list is inspired by one I found online by "mashmalovsky" found here. The lists are all virtually the same except I liked mashmalovsky's mainboard Devastating Summons and I wanted to shift around some sideboard.

This deck can come out swinging as hard as most, but what's truly impressive is its ability to fight through games that look extremely unfavourable. Here are a couple of recent examples of mine involving this deck: 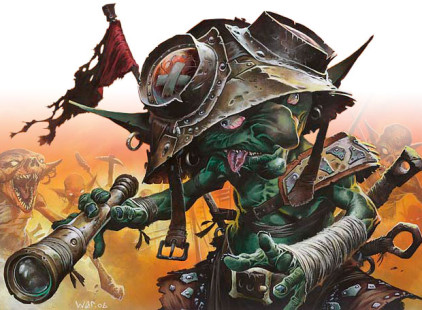 Okay, so maybe some of these are sheer dumb luck coming into play. I just rip the nut and go to town. But is that really what's going on?

One thing I've noticed, which may be obvious to some, is that sandbagging is a necessary skill in this deck. The deck counts on dealing damage in explosive bursts rather than incremental chips. Damage is damage, but having an opponent attack you whilst feeling safe, only to respond on the back swing with a Goblin Guide, a Goblin Guide,  and a Legion Loyalist out of nowhere is the bread and butter of this kind of deck.

I've also noticed that it feels really weird to have an opening hand with Goblin Guide in it and NOT play it turn one. I mean, sometimes it's the obvious snap decision but at other times you have a hand that has Foundry Street Denizen. Turn one you don't hit. Turn two you Goblin Guide, trigger, attack for four. Otherwise, you Goblin guide turn one, hit for two, then turn two hit for two plus any haste creatures you have.

Both ways lead to four damage by turn two, at least. It might be right to lead with a Foundry Street Denizen when anticipating a removal spell while on the draw.

Legion Loyalist is a hidden gem in 8-whack. It leads to some absolutely absurd attack totals with Goblin Piledrivers, especially if you play the Loyalist out on that turn. Goblin Piledriver getting trample and first strike from the Loyalist usually spells a quick end to the game unless met with removal in a jiffy.

Overall, I'd recommend giving this deck a try if you don't mind playing very combat-centric, aggressive decks. This deck can definitely hang with the big boys and girls. 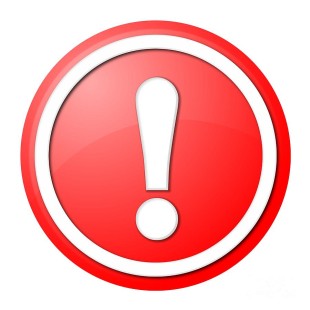 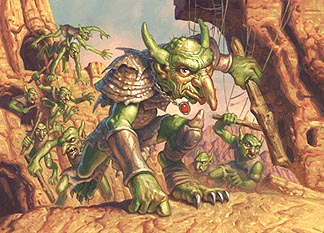 Modern is getting a new Goblin addition with the release of Dominaria on the horizon. April 27th will see the three-drop cost-reducer's first bout in the Modern arena, and boy does that get me excited. When Goblin Piledriver was reprinted and added to Modern the fans went crazy, and I suspect Warchief will see the same kind of response.

Come on, think about it... Sure, it's a three drop. No, we don't play a lot of those. In fact, there's exactly two at this moment. However, doesn't the prospect of hasty Goblin Piledriver for one red mana sounds like a blast?

Here's an example for if dreams were real:

I know we're still in dream land, but just for your information that's a scrumptious 23 damage on turn two.

The Goblin Piledrivers get +6/+0 for three other attackers. Three Piledrivers at +6/+0 and base attacks makes 21, plus two from that pesky Goblin Warchief, PLUS the damage from turn one. Can confirm 25 is enough.

Oh no, plot twist when the opponent is playing Providence .

I don't know about you but I'm hoping that perfect eight-card combat kill can happen at least once in real life for somebody. Really though, Goblin Warchief will let the deck consider bigger options such as Goblin Rabblemaster, Goblin Warchief, and so on. We're sure to see a few different creative applications and new formations of the Goblin tribal deck. 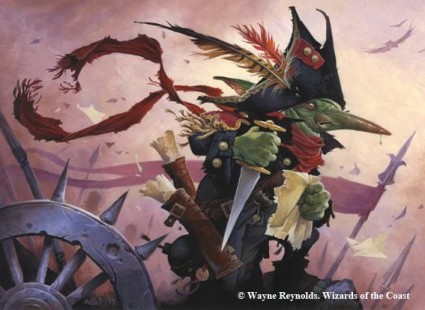 It'll be interesting to see how Goblin Warchief affects the Modern landscape in addition to how much of a splash it will make in Standard. It has the design to be an incredible card in Standard, but the support for it currently seems weak.

All we have for a supporting crew (yar'har'har) are seven goblins:

But who knows? There could be a little somethin' somethin' here.

So, what do you think of Goblin Warchief in Modern? Are you going to go for the perfect eight-card, uninterrupted, combat kill? It seems loose, but I'll probably try it too.

Thanks for dropping by. As usual I'm more than happy writing this, and I'll catch you again next week here at The Modern Rogue Report!