Musings of the Madman: On Buyouts and Legacy

Welcome back all! Who doesn't like sitting on a pile of gold and reinvesting it to make more gold? What if the gold was needed so that others could make use of it productively? Yes, the analogy train got off the tracks there, but the recent buyout situation on Eternal staples merits a closer look, especially as it affects the Legacy playerbase as a whole.

It all started a few weeks ago when Pro Tour qualified Craig Berry bought out a lot of this card: 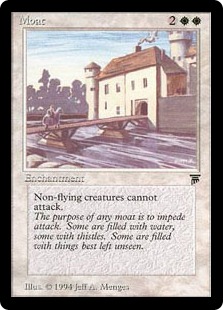 Now, Moat doesn't see a whole lot of play outside the Miracles shell, but Miracles is taking up a healthy chunk of both the online and live meta game, and Moat stops several very aggressive decks in their tracks. It was around $375 or so before the buyouts, then hit $600 or so. How do these buyouts function? A buyer scours the aggregate stores and finds all copies of a given card, scoops them up and then either holds onto them or re-sells them later. Nothing intrinsically wrong here as this looks like a time-honoured tradition of "flipping goods", where you work the market waves to make a profit.

The larger issue here is that the scarcity of Legacy items given to the Reserved List (a list of cards by Wizards that will never be reprinted in game-identical form) and to an increasing pool of players competing for the materials, buyouts essentially push a portion of players out of the format. Here are some thoughts from Mr. Berry on the topic, via mtgprice.com:

"Q: For Moat, that makes sense. What about Lion’s Eye Diamond, a buyout that has priced some people out of playing Legacy?

"A: I don’t look at Magic as a game, I look at it as a business, and it’s kind of like day trading. I feel bad for anyone priced out personally, but it’s not going to change what the business is. It’s just how the world works. (...)

"A: The people who complain about prices don’t affect the market. They weren’t the ones who were going to spend money from the beginning. With Moat, I’ve never seen so many people complain about a card they were never going to buy. It’s really easy to have trigger fingers and complain about something, but it doesn’t affect the market. But I do feel for them personally. A friend commented that a kid at his store couldn’t finish his Legacy deck because all he needed were Lion’s Eye Diamonds and now he was priced out of them. That’s one of the genuine cases and I gave him LED’s at pre-spike prices."

I'll slightly disagree with Mr. Berry that those complaining about buyouts were never going to get those cards. Local Legacy players needing the cards to complete decks having to pay a 25 % to 50 % premium slows down progression of the format, which brings me to the format itself.

Where should Wizards go with Legacy?

I see four potential avenues to the format's health:

They have taken cards off previously and they could likely do so again. Taking off the dual-lands, for example, would likely save players a few dollars. If they were reprinted heavily (unlikely due to their power level) it would cause a dent in collector's pockets at the benefit of having more players.

Allow a limited amount of proxies.

Again, this is unlikely as they've stated earlier in the year that stores allowing proxy use may be punished (likely because of the then forthcoming Eternal Masters) but Vintage events are run with proxies occasionally, so perhaps this will carry over.

This would have the horrible side-effect of tanking prices on a ton of older staples and alienating a good portion of the playerbase, and has been debunked already by Wizards, so we'll leave that in the dustbin of history.

Move Legacy to Magic Online and go from there.

It has already started doing so to some degree. There are large Legacy events there and we know Wizards looks at Magic Online to make a portion of its decision with bannings, the restricting of Lodestone Golem in Vintage in part deriving from the Vintage Super League. You can also get a deck done for an absolute fraction of the price of a real-life deck. The disadvtanages are many, however. First among them is that you do not have physical copies of the cards, second is the lack of actual social interaction and the associated activities. Third are the mechanical-associated errors you might encounter (bugs, misclicks on your part, coding, etc.) that might make it a little more frustrating.

For the moment, we've still got paper Legacy. New players are entering the fray, local events draw a decent amount of people and you can find some games here and there. While it's not a cheap format, your investment is sure to increase over time. And if you get bored with it? You can use all those dual lands and so on to power your next Commander decks.

Until next week, may you find some fun with your Legacy staples.