Welcome to today's edition of the Daily Dose of Oath of the Gatewatch! Prerelease Week continues as we talk about the cards that you will want to play in your local Two-Headed Giant Prerelease event.  Here are 10 cards that focus and reward you for playing as a team.

Although you would think that most of the cards listed would have the new Surge mechanic, some may surprise you!

This is a great value card in Two-Headed Giant.  It can be used to flicker any of your team's creatures if they have a good enter the battlefield ability. It's ability can also be used to protect both of your creatures against any creature removal spells coming your way.  Since this is one of the few cards in Oath of the Gatewatch that does not make you exile one of your own creatures in order to use the ability, definitely makes this my favourite card for Two-Headed Giant. 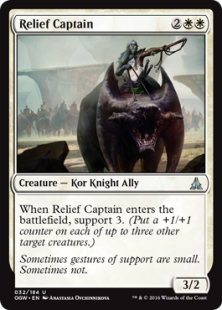 Relief Captain by itself is a 3/2 creature for four mana, which isn’t very good in any format.  Imagine though playing Two-Headed Giant and your partner has a very aggressive deck where they have three creatures on the battlefield by turn four.  Relief Captain allows you to take advantage of that fast start by giving them all +1/+1 counters.  Your board might be light, but this Support strategy could pay off for your team. 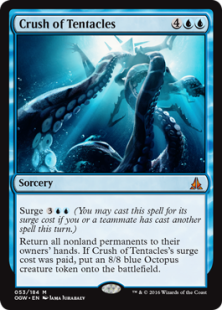 Not even counting its Surge cost bonus, being able to return all nonland permanents in any team game is a huge reset button that allows you to recover from a slow start.  That being said, if you could do that and get an 8/8 Octopus onto the battlefield, it will give your team the head start they need. 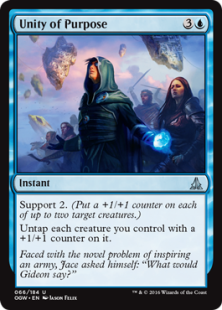 A great that card will allows you to help both your own creatures out, while also helping out your partners as well.  I see this in decks where both players have Support cards and +1/+1 counters are given out like candy and the world is just a better place because of it. 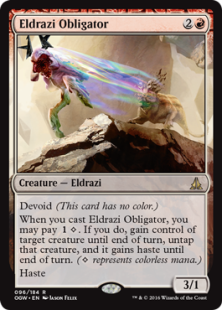 Eldrazi Obligator is a creature that has a casting cost of three generic, one red, and one colorless mana.  This is because you should never cast it without its sweet ability. What makes this really good in Two-Headed Giant is that your partner can cast a large creature and you are able to take control of it and give it haste so that you can use it right away!

Fall of the Titans 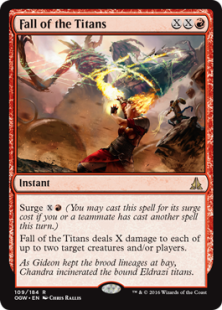 Usually with this Surge Spell in a head-to-head game you will have to either target two different creatures or target one creature and one player.  Thanks to team fun, you will be able to hit the opposing team for double damage, straight to the head of the giant!  What a way to finish off a game quick!  Save this spell for your last strike of glory.

You will be holding onto this wonderful Dragon, waiting until turn five and than leaning over to your partner and asking them to cast any spell in their hand, just so you can lay down this wonderful 5/4 Flying creature for five-mana that will deal some much needed damage anywhere it seems fit.  Feel free to flicker this with Eldrazi Displacer all game long as well. 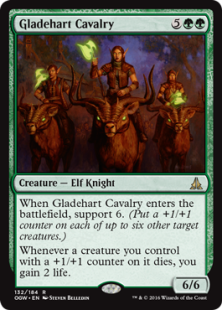 Support 6!  That’s six different creatures that you will able to give sweet +1/+1 counters to.  Whether it be yours or your partners, all of your creatures will be happy as can be.  Throw in the added bonus of some life gain down the road and, well, isn’t that just swell. 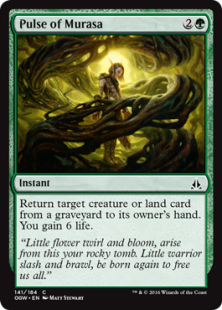 A great way to help out a teammate who is running low on resources while also gaining life for your team.  When in doubt, it can also help you out as well, but this is all about teamwork, right? 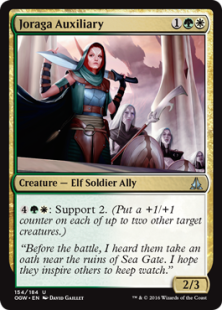 Joraga Auxiliary is the only renewable source of Support you will be getting this weekend.  Being able to add +1/+1 counters each turn will allow you to help grow your side of the battlefield quite quickly so that you are able to overcome and win the battle.

What is your favorite Two-Headed Giant card for this weekend?  Let us know in the comments! Thanks again for reading today's edition of the Daily Dose of Oath of the Gatewatch and I look forward to seeing you again tomorrow as we talk about some deck ideas for the new Standard season!