Recently, I attended the GP here in the lovely city of Ottawa (but technically Gatineau) for some Khans of Tarkir limited action. With very little practice in both Khans sealed and draft because of a busy school schedule, I felt a little unprepared heading into the tournament. I still had a general understanding of what was good and bad in the format so I wasn’t going in blind. Also if you haven’t had the pleasure of attending a grand prix in your hometown, let me tell you, it was a delight. Sleeping in your own bed each night, almost no travel time, no hotel and travel costs, how wonderful! But let’s get to the good stuff, starting with day 1.

Here’s the sealed pool I was tasked with using for the first nine rounds: 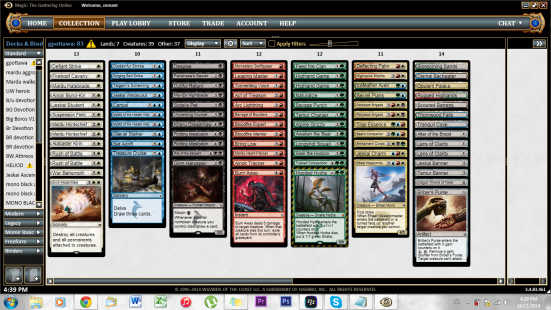 At first glance I immediately noted that I had some powerful options in white, with two Mardu Hordechief, Suspension Field, and End Hostilities. Sweeper effects in sealed are incredibly powerful, so I made sure all my first few attempts at a build featured white. Beyond End Hostilities, my only other powerful rares were Grim Haruspex and Hooded Hydra. As a strategy for building my deck, I looked at the powerful gold cards I wanted to play, with white as my base colour, and tried to build around what my lands allowed me to play profitably. This is the build I settled on: 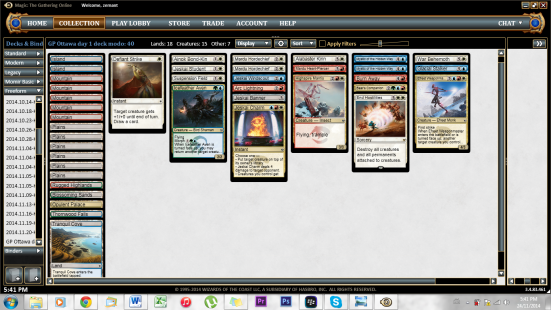 I dismissed black early, as it wasn’t too deep. I considered a small splash for the Grim Haruspex, Ponyback Brigade, and Armament Corps, but decided I didn’t want to be playing 5 colours. I spent a long time deciding on whether I wanted to play green as a base colour, but in the end decided that red gave me more powerful options and access to solid removal. Adding blue as my third colour allowed me to add a lot more power to my deck, and I also chose to splash green for Icefeather Aven and Bear’s Companion because the lands I had available to me made it easy on my mana. I made an error in deck construction by playing 18 lands as well as a Jeskai Banner, as well as playing a Defiant Strike over Bring Low. I actually didn’t realize I had a Bring Low in my pool until I looked over my sideboard after deck construction. After every game 1 on Day 1 I sided out the banner and the Defiant Strike to bring in Bring Low and Treasure Cruise. Aside from the two cards I was very happy with my main decks performance. I had some very good evasive creatures in Mystic of the Hidden Way, Highspire Mantis, and Jeskai Windscout, as well as great removal in Arc Lightning, Suspension Field, Burn Away, and of course End Hostilities. With my deck finally together and my first round bye complete, I sat down ready to battle in round 2.

I’m going to give a general overview of my decks performance on Day 1 rather than go over each round. I took an unintentional draw in round 2, which was definitely not how I wanted to start off my day. But I resigned myself to battle through the draw bracket rather than let it bother me, and the rest of day 1 went quite well! End Hostilities was of course amazing all day, I learned very quickly that not many people play around sweepers in this format. Most of my opponents tried to jam up the board to get through board stall “reset button” in my deck each game that I could play towards if things got too hairy. Beyond the obvious that the only rare in my deck was phenomenal all day, I had a few other all-stars I’d like to talk about:

Arc Lightning – I cannot speak enough about how great this card was for me all day. Almost every time I cast it I was getting a 2 for 1. I was able to make a lot of odd attacks during the day that led my opponents into making some obvious blocks, and then getting completely blown out post combat. In game 3 of my win and in to day 2 against Dave Shiels, I attacked my morph creature into a Disowned Ancestor and a Mardu Skullhunter. He quickly blocked with the Disowned Ancestor and I was able to Arc Lightning away both his creatures post combat. After this he was on the back foot for the rest of the game and couldn’t catch back up.

Mardu Heart-Piercer – I was faced with a few similar turn 4 plays on day 1, where I’d attack my morph creature into my opponents morph, they would declare no blocks, and my post combat Mardu Heart-Piercer took out their morph. Heart-Piercer almost always got raid triggered in my deck because of all the evasive creatures I had, and the advantage it provided allowed me to pull ahead in multiple games.

Jeskai Charm – It’s pretty obvious that the charm cycle is quite good in limited. I used all three modes on Jeskai Charm throughout the day to great success, with the +1, +1 and lifelink mode winning me a handful of games.

Mystic of the Hidden Way – This card is fantastic. On more than one occasion it would deal 9 to 15 damage in a game, and it was great at making sure I could always trigger raid for my Mardu Heart-Piercer and Mardu Hordchief’s. Mystic was good in the early game as well as the late game, able to attack through board stalls and steal games out from under my opponents.

After my round 2 draw, I didn’t take my first loss until round 8 against an opponent playing 5-colour good stuff. We had a very long and tight game 3, but he was able to pull out the win in the end due to him having a mid-game End Hostilities while mine sat somewhere near the bottom of my deck. This left me at 6-1-1 going into the final round, and as my luck would have it I was paired against Dave Shiels. I did manage to pull out the win to punch my ticket to day 2 at 7-1-1.

Now this was my first time making day 2 at a limited grand prix, so I was definitely excited to draft. Draft one was interesting, I was blue-red for packs 1 and 2, and with a handful of Temur lands already going into pack 3 I was looking to pick up some good green. Turns out I was in the right colours as I got a 4th pick Savage Knuckleblade and a 7th pick Bear’s Companion, but beyond those two picks I didn’t pick up anything notable in pack 3. This was the list I registered:

I felt like my deck was powerful and was feeling good about round 1 of day 2. My opponent was on a relatively aggressive Jeskai build and he stole game 1, but game two my deck overpowered him pretty convincingly. Unfortunately I had to mulligan to 5 in game 3, and although I was able to keep pace for most of the game, being short two cards cost me the win in the end as my opponent killed me while the Force Away I needed to survive and kill him the next turn was sitting on top of my deck. It was a tough way to lose but I didn’t let it weigh on me. Next round I sat down across from Ottawa’s own Andrew Noworaj. Andrew had drafted a spectacular 5-colour beast that featured 2 Zurgo Helmsmashers and a Mantis Rider. He very handily destroyed me and left me 0-2 in the first draft. I was definitely disappointed to start the draft day at 0-2, but I was determined to get a win. I was up against a Sultai deck in the next round, and my deck finally came together and soundly crushed my opponent. Although I was happy to get a win, there was one more draft to focus on. I was sitting at 8-3-1 going into the final draft and needed to go 2-1 to finish in the money.
This was the deck I drafted for draft #2:

As you might notice, the deck is a train wreck. I have some powerful spells in Ghostfire Blade, Jeskai Charm, Icy Blast, and 2 Arc Lightning, but beyond that there isn’t much. My creatures are all pretty terrible, with Mystic of the Hidden Way and Alabaster Kirin being the most powerful (which is sad I must say). The draft went so poorly for me because the player on my left and my right were cutting my colours in all 3 packs. I drafted my seat poorly and was punished accordingly. I tried to get the player on my left into black pack 1 by passing quite a few powerful black cards after I first picked Icy Blast and second picked Jeskai Charm. Unfortunately the player on my left didn’t pay attention to the signal and I got punished. I should have just started drafting black myself and I could have put together an exceptional deck, but instead I found myself sleeving up this pile of garbage. The deck performed about as poorly as I expected, and I started the draft 0-2 yet again. Knocked out of prize and upset with myself for my drafting performance, I sat down for the final round to play for pride. Turns out even terrible decks can win if the draws come together correctly, and I managed to beat a much better deck than mine 2-0, finishing the tournament at 9-5-1.
Overall I was happy with how the GP went for me, even though day 2 went quite poorly. I had a very good day 1 performance and finally broke through to day 2 in a limited grand prix. The tournament was a lot of fun and I learned a lot about the format. I felt like I played really well all weekend, with my only regret being my choices in draft #2 on day 2. I can’t wait to have another go at the format with everything I learned.