No, not the puzzle series this time. The actual card. 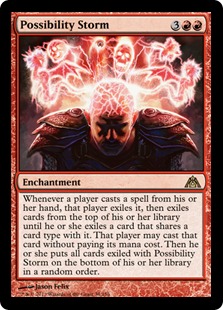 Since its 2013 release, this card has been toyed with in numerous ways, mostly as yet another way to try to cheat out Emrakul, the Aeons Torn. The nice little upside of doing it with Possibility Storm rather than Goryo's Vengeance or Through the Breach is that you actually cast the card, so you get the extra turn trigger, making the whole ordeal pretty unsurvivable for your poor opponent.

The other interesting upside is that Possibility Storm completely messes with whatever your opponent is trying to do. Only the most redundant decks can actually manage to still play through it.

But there's two chief problems that few deckbuilders have managed to successfully overcome:

The common approach here has been to play effectively creatureless decks, but as you'll see that's not exactly the only way.

The solution of course comes down to the deck's construction. To date, a few angles have been tried. Below you'll find some of those, as well as some new ideas that I've been tinkering with for quite some time:

Coax from the Blind Eternities + Endless One:

Effectively, your deck is creatureless apart from Emrakul, and your game plan is to Coax an Endless One into your hand on turn three, then ramp out Possibility Storm on turn four with a Desperate Ritual and immediately cast Endless One for X=0 to get Emmy.

If things don't go exactly as planned, Coax can grab a Thought-Knot Seer or another utility Eldrazi, and the deck's mana requirements are forgiving enough to allow for Eldrazi Temple or maybe even Urza lands. Meanwhile utility cards like Izzet Charm help the deck tick while also offering a shuffling out if Emrakul is naturally drawn.

It's a decent plan, except that it's all done at sorcery speed. If you do try to curve it out, your Endless One is susceptible to Thoughtseize, leaving you dead in the water until you manage to grab another one from the sideboard. Meanwhile, if you wait until after casting Possibility Storm to tutor the Endless One, you better have no other sorceries in your deck, or your Coax might accidentally become something else.

A step in the right direction. Tolaria West is a clever innovation since it can't be Thoughtseized and its Transmute ability can't be countered, meanwhile multiple copies simply fill out your mana base. You can also tutor control pieces like Engineered Explosives or Chalice of the Void, and you can even get Hangarback Walker post-Possibility Storm since transmute isn't affected. You can even up your consistency with effects like Expedition Map.

The decklist is comparatively clean, and friendly to additions of other angles such as Blood Moon, Koth of the Hammer, Chandra, Torch of Defiance, or Valakut, the Molten Pinnacle (though obviously not all together.)

On one hand, this is a terrific idea, because you can assemble the whole thing on the spot. Plus, although you might not want to take it, you even get the option to play the deck mono-red. (Going blue is still probably ideal, though, for card filtering, Izzet Charm, and even Mystical Teachings to make the Pact draw more reliable. You can then switch the creature to Slippery Bogle if it makes the mana easier.)

The chief downside here is pretty big though - the triggering creature still costs one mana, so the combo is effectively on schedule for turn six. You also have a lot of dead cards in the deck, as Summoner's Pact and Possibility Storm are both useless without one another.

You can try to resolve the six-mana downside by running Allosaurus Rider instead. That option invites you to go heavily into green, which lends itself nicely to ramp spells like Search for Tomorrow. Still, amassing enough green spells to cast the Rider for free is harder than it looks, and at this point the shell is starting to look a lot like Scapeshift, so just go play that instead.

Either approach solves the clunkiness, but is iffy otherwise.

Getting spicier! There is a huge benefit to a build like this, which is that you can still play a creature-rich deck and apply pressure by traditional means, keeping the combo as a back-pocket threat to steal games out of nowhere. Congregation at Dawn as an instant lets you stack your next card to be drawn as a 0-cost creature with Emrakul right behind it.

This approach is however riddled with downsides, the biggest of which is being forced into playing Naya. Naya is poorly suited to 2+ card combo decks because of its poor card selection, lacking critical pieces like Serum Visions. You can improvise with alternatives like Commune with the Gods, but even that only helps find one of your two card types.

A build like this probably wants to go fairly big in its other threats, to make a five-mana Enchantment fit reasonable well. This lends itself to a natural Emrakul friend in Nahiri, the Harbinger, and plays well with high-value / ramp cards like Renegade Rallier. However, the combo package occupies up to nine cards that otherwise don't fit what the deck is trying to do, so unless it's coming in just as a sideboard plan, the aggro dilution is certain to hurt more than help.

A middle ground between creatureless and creature decks, we can play up to four non-Emrakul creatures with Gifts Ungiven, since we can use it to clean out the deck of other creatures.

The curve of four-converted-mana-cost Instant into five-converted-mana-cost Enchantment is reminiscent of Splinter Twin, and the versatility of Gifts Ungiven allows us to build a deck with several paths to victory, with or without Possibility Storm.

A main deck with access to all these lines is very powerful, and splashing white for Unburial Rites means Nahiri works seamlessly here too.

Still, it's not perfect. Even though you can afford to cast a creature or two for normal use, your attack plan still isn't very good. Four creatures is still too few to go for the Snap-Lightning Bolt tempo plan, so this is a bit Gifts Ungiven or bust.

With the printing of Opt, it's actually conceivable to filter through your deck completely at instant speed. In this case, that could leave us open to cheating out a mammoth Sorcery, and they don't come any bigger than Enter the Infinite.

As for the Sorcery to cheat it out with? Your best bet is a Gifts package again, looking for Serum Visions, Sleight of Hand, and probably Renegade Tactics since Gitaxian Probe is no longer an option.

Once you resolve Enter the Infinite, you draw your deck and Lightning Storm them into oblivion using Simian Spirit Guides.

The upsides? You can run the regular full UR tempo shell, and even if drawn regularly, Lightning Storm can be an effective finisher to that game. Meanwhile, Simian Spirit Guides help compensate for the sixth mana required to execute the combo while and also giving you access to turn two Blood Moon as a disruption tactic.

The downside is that Enter the Infinite is a totally dead draw, as it can't be shuffled back into your deck with any reasonable card. Cute though it may be, the shell is just far more viable without the combo.

Six different concepts on the table, six sets of pros and cons. Here's a quick summary of how each of them stacks up, sorted by which one I'd recommend playing if you've got copies of Possibility Storm that you've been looking for a reason to sleeve up.

With a card as silly as Possibility Storm, there are a whole lot of viable ideas. If you have any thoughts on other ways to use it, or for tweaks to make to any of these suggested builds, I'd love to hear from you in the comments.