Hey guys, welcome to the first instalment of Budget Brews where I'm going to be tackling different archetypes in various formats, making them more accessible and cheaper. As a guy with a family, I don't have as much disposable income to put towards Magic that I used to, but I still want to try and remain semi-competitive.

So this week we're going to look at an archetype from Legacy which you will see pop up in Modern from time to time. It even got a feature match this past weekend during SCG Louisville and, while it didn't make day two of a big event, it can find it's spot as an Friday Night Magic all-star.

8Rack is a fun (for you) black control deck, that wants to make your opponent's life miserable and not let them have a hand. Then punish them for it with cards like The Rack and Shrieking Affliction. The most expensive version of the deck includes Liliana of the Veil and Ensnaring Bridge can cost around a grand. My budget version is going to be substantially less, but still a bit competitive. Which is the whole point, isn't it?

With Modern prices the way they are we aren't going to bother with Thoughtseize or Inquisition of Kozilek, which are 8Rack all stars - they target the person's hand and lets you rip whatever you want out of it. Instead, we're going to use: 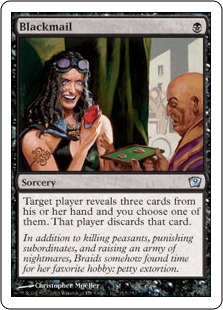 Blackmail costs around a dollar and, while it only reveals three cards from your opponent's hand, it has the benefit of ripping a land out of it, which the other two do not. If my opening hand doesn't have Blackmail in it, I usually mulligan. An ideal opening hand would consist of not only Blackmail, but also:

Smallpox on the play, even against an aggro deck can be an amazing start. Swamp, Swamp, Time Walk the opponent and send them down a card. Yes, the card is traditionally what you would call “card disadvantage” in that you're discarding a card and playing the card from your hand. But your opponent is now land-less, even creature-less, and you don't need more three lands in play to function.

With two of the major hitters spoiled, let's take a look at the whole deck list:

Total cost via WizardTower.com the deck costs about $99 Canadian, or if you're looking for something for MTGO it's around 28 tickets through Cardhoarder. So, it's a tenth of the cost of an 8Rack deck that's packed with Liliana's.

The deck has a bit more removal than a traditional 8Rack deck might contain to make up for the fact that we don't have targeted hand disruption and there are creatures where if they get discarded they go to the field (it's a super feel bad when they play a 4/4 for free – unless you make their Loxodon Smiter a Victim of Night, that is). Smother is fantastic in a format full of linear aggro decks like you find in Modern because there's hardly any creatures that get played that cost more than three mana, so it's going to hit 90% of the opposing creatures.

We also have more creatures: Nyxathid on a board where you have control of their hand is a 7/7 for three mana, or a 6/6 on their turn when they draw their card. It makes for a great finisher on top of your Racks.

Dakmor Salvage in this deck pulls double duty, with Raven's Crime it lets you Dredge up a land so you Retrace Raven's Crime, or it gives you a land to either discard or sacrifice to Smallpox.

If you like the deck and are looking to upgrade it, the first thing I'd look into getting is Ensnaring Bridge. It's a great card while we're in the middle of the Eldrazi Winter and we drive ourselves to Hellbent in the mid to late game to make sure they can't attack. Phyrexian Obliterator is a definite upgrade - it might be smaller, but it's harder to deal with a threat that will make them sacrifice their things they have on the field, or you can go creature-less since you're running Ensnaring Bridge.

Our sideboard has some more removal: Languish to act as a board wipe against Affinity or Burn and Hero's Downfall is there if they land a Planeswalker, because we really don't have a way to deal with them.

So, with card choices being explained let's get on to the good part: the testing. We're going to send our budget brew into the wild on XMage and see how we fare against the meta of Eldrazi Winter.

Yeah, I didn't think anyone tried to play this deck anymore either, but here we are. For those that don't know with Heartless Summoning they play Myr Retriever for free, then it dies when it hits the field, and when they have Altar of the Brood out, I mill.  Both games they were on a mulligan to five, which as a discard player I love. The first game they couldn't ever get their combo going and game two when they were going to be able to combo, my turn one Nihil Spellbomb broke it. Game one I won with three Racks on the field and grinded him out. Game two I won with Shrieking Affliction and Nyxathid.

This deck is the remnants of the old Pod deck, using Collected Company and Chord of Calling to combo you out. If it can't do that it's usually able to value/grind you out of the game. Well, they're able to do that when they have a hand. The game I lost I wasn't drawing into any of my removal and just drew lands. I had two Racks out but he had a board full of creatures and I died with my opponent at two life.

Okay, anything with Life from the Loam is going to be a bad matchup. With all of the dredging it can do, and then Squee, Goblin Nabob and Golgari Brownscale... Yeah, we're just going to move on.

Sheesh, these creatures got out of control pretty quickly and he had turn one Hardened Scales each game we played. He got the game on the play, and game three I kept a slower hand with two Dismember's which saved my bacon and eventually led to me being able to control his hand. I ended up with two Racks and a Shrieking Affliction on the field.

Well, all in all that's all I got for this week. Out of the four games we played we went up against one deck that you'll definitely see in a tournament and the other were more FNM type brews (unless your local gaming store is super spikey and has all the money to spend on Tier 1 decks). Still the deck is fun for you, and miserable to play against.

Have an idea for something you'd like me to brew up? Give me a shout in the comments!