We're going to dive back into Modern this week, since Standard is kind of in that limbo state and we're waiting for Aether Revolt to come out (which is looking SWEET), we're going to look at a modern deck that I just discovered a few days ago and have been playing the heck out of the past week on Xmage, and I can't wait to play it during my next Modern FNM and surprise my opponents.

Why am I going to surprise my opponents? Well, I'm not playing something that janky, and there isn't any glass-canon combo's. This week? This week we're going right to the face, aggro style. In true aggro style, we're winning by turn 5, or we're probably going to lose the game. The deck needs to win by Turn 5, but I've actually had a few games we're I've won on Turn 3 and mostly on Turn 4. 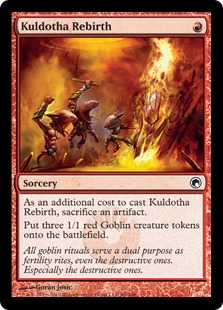 All told this might be one of the cheapest Budget Brews we've done. It only goes for $60 tops at TCGPlayer Market Prices.

This is a fun and interesting deck that combines the synergy of Goblins and the synergy of artifacts. We're basically just jamming together the modern 8-Whack and Affinity deck lists to make this beast.

Playing aggro or burn decks get a bad rap. People always say they're easy to play, and their mindless. It's true, that if the deck is “on” and your opponent doesn't have any interaction that the deck can be very easy to play, but since that's rarely the case you usually have some pretty big decisions to make.

First, don't be afraid to mulligan. I've noticed that we want to have 2 lands in our opener and a good mix of creatures with one of the Bushwhackers as back-up. Then we'll either be drawing into our finishing burn spells, or another Bushwhacker to seal the deal.

Memnite and Ornithopter are our decks two “freebies.” If you're playing affinity and you have these in your opening hand, you just throw them right out on the field. With GoBots, you want to hold at least one 0 drop in your hand so you can surge Reckless Bushwhacker and pump the team, plus give them haste.

Bomat Courier is an interesting card, and the newest card printed in the deck. I personally don't think I've been playing the card right in my initial testing over Xmage, but I think there can be some serious card advantage gained through the card, which is what decks like this are usually lacking. It can give you some legs past the turn 4 or 5 cut off that I initially gave the deck.

The first punch this deck packs combines the power of Signal Pest and flooding the board with cheap efficient creatures. Backing that all up with the kicker and surge abilities of Goblin Bushwhacker and Reckless Bushwhacker you're hitting your opponent in the face for some serious damage.

After our initial wave of damage with creature damage, we want to leverage the power of powerful burn spells like Shrapnel Blast and Goblin Grenade sacrificing our board to punch our opponent once more square in the face for some serious points of damage.

Sideboard for the deck should include the usual sort of stuff. A bit of graveyard hate through Tormod's Crypt and Shattering Spree to hate our Affinity cousins. I'd also probably include some red removal spells to help clear the way for our team if we need it. Lists that I've seen are also running Galvanic Blast which might be a good burn spell to throw in the mainboard. 4 for 1 is better than a Lightning Bolt but, it's too situational, so I'm up in the air.

Skullcrack would also be a decent sideboard card, if your meta is full of Soul Sisters, like mine sometimes is.

Blood Moon is usually the best place to start for decks like this, it'd be in the Sideboard, but it's defenitely warrants a spot.

The most famous aggressive goblin Goblin Guide should also be in the deck. In it's spot we just used Frenzied Goblin but any 1 drop goblin will be good.

Wooded Foothills Bloodstained Mire I'd say 4 of each to limit our land draws later on when we need to be drawing gas. Playing these will reinforce the needing 2 lands to go in our opener statement.

Wooded Foothills also opens the door for us to splash a bit of green for Atarka's Command which would be nothing but gas in this sort of deck.