They say revenge is a dish best served cold, but whoever said that clearly wasn't a Red player. Red players know that revenge is actually a dish best served on fire, with a side of fire and more fire. More fire will be served for desert, topped with lightning and seared flesh. Please deliver your compliments directly to the chef, Nahiri, the Harbinger.

Nahiri is out for blood, which should come as no surprise given that Shadows Over Innistrad's stinger line was 'Hell hath no fury...' Nahiri is a woman scorned, and a particularly powerful one at that. Sorin has done her wrong, and although we might not know exactly how, we do know he is going to pay dearly (see: Declaration in Stone, Nahiri's Machinations). Let's take a closer look at the Harbinger and see what she has to offer.

Don't let Nahiri's steady price drop fool you, she is an engine of destruction waiting to be unleashed. While many view her +2 ability as nothing but a discard/Madness outlet, we're going to take full advantage of it and rely on it as equal parts draw engine and game winner. We just need to make sure we have cards we can either afford to throw away, or outright want to throw away. Since this deck is all about revenge, let's consider the head honcho of hurt himself – the Demigod of Revenge. 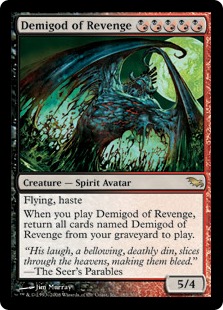 This game winning half-deity has been causing havoc since his printing, especially during the early days of Jund. Why are we using him here? As a win condition that we actually throw away in the early game, and bring out in the mid/late game to swing for a ton of hasty flying damage. As an extra bonus, he might very well be the card that has the best synergy with Nahiri overall.

Her +2 throws initial copies of him away to draw new cards, and her -8 fetches one out from the deck to revive all the fallen copies for a devastating – not to mention potentially game winning - swing. The Demigod also doesn't care about having to come back to our hand, because that just means we can play him again, resurrect any of his fallen comrades once again, and swing for what could easily be lethal again.

We won't always have a Demigod to throw away. More often than not, it'll be something else, and there's nothing we can do about that. What we can do is make sure that it's something we can get back or can afford to discard. Squee, Goblin Nabob is a prime example of a discardable card that we can afford to throw away, because just like the Demigod it will just keep coming back.

It should go without saying that we'll be using Fiery Temper, since it becomes a Lightning Bolt when it's discarded. Unburial Rites and Faithless Looting both have Flashback, meaning that we can either hard cast them and then re-cast them from our graveyard or discard them and then cast them from our graveyard for removal or draw as needed. We aren't running any real black cards on our list, but with eight fetch lands a single Blood Crypt should be enough to get us the one black mana. Realistically, we won't need it – we'll just worry about getting a single white source to cast it from our yard.

Rites brings back Demigod of Revenge, and we've already talked about how awesome bringing him back to life can be. Rites can also bring back our other major bomb: 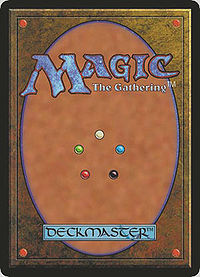 Because a deck about Nahiri's revenge couldn't not have her, and because she's amazing. Having an extra way to sneak Avacyn into play and give our creatures Indestructible for a turn via Rites is an incredible asset. Double-A is a clock, a combat trick, and a board wipe all in one. Is she the new Baneslayer Angel? She's a flying white angel bomb for five mana, so yeah, she probably is. The board wipe and Lightning Bolt effect on Avacyn the Purifier is nothing to scoff at. Three damage kills a lot of creatures, even in Modern, and those it doesn't kill are left damaged as they come into battle.

Let's cut this giant tangent off there and loop all the way back to Squee, Goblin Nabob. A pair of him in our hand at any point in time basically makes Faithless Looting say 'draw two cards' for one red mana. Is it hard to get a pair of them into our hand? Not if we start throwing cards away immediately. Faithless Looting costs one, so that's pretty early – but what can we follow it up with? What on Innistrad could Nahiri be using to make angels go insane as a tool in her quest for revenge? The moon has something to do with it, obviously... But what red source on Innistrad might be being used to cause mass insanity? What about... 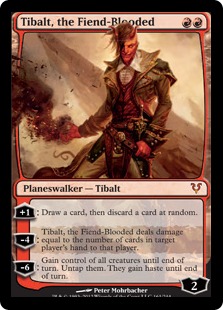 Oh, Tibalt. How quickly you were forgotten and dismissed for being bad. Drawing an extra card every turn starting on turn two is great. Randomly discarding a card every turn is usually not so great, but with our list we actually don't care. Over half our creatures don't care if they end up in the graveyard, and the bulk of our spells either have Madness, Flashback, or just want to be dead in the first place and so don't care if they get thrown away. Even so there's no denying Tibalt is a gamble, but it's one this deck is willing to make.

The deck plays not unlike an angry Scapeshift deck, where you're essentially racing to get your ideal set up for turn four or five to win the game. Most games that will consist of having a set of Demigods in your graveyard, but don't forget that Avacyn is a whole clock on her own. Insolent Neonate basically takes on the role of Sakura Tribe Elder in that he exists solely to be played and sacrificed to speed us up a turn. He also acts as an 'activate' button on Avacyn, bringing out the Purifier on demand.

We actively fill our graveyard as best as we can, with Firemane Angels to keep us in the game and Demigods to help us end it. Neonates can chump block for us before shuffling off their mortal coils to get us a new card, feeding our graveyard or launching a Fiery Temper on their way out. Because we trigger the Neonate before our upkeep begins, throwing away a Squee is never a waste. Squee is love, Squee is life.

Squee is just the best in this deck. Squee loves Tormenting Voices. He hears them all the time, and they tell him that netting two cards at the cost of him being dead for a turn is super worthwhile. They are not wrong. Squee also loves Faithless Looting, sometimes having two of himself expire temporarily to once again net us two cards. Squee really, really loves Lightning Axe, because it kills most of the biggest threats that are likely to hit the board – and Squee comes back. Tibalt and Squee are great friends, because if Tibalt makes us pitch Squee, Squee just comes back. Squee always comes back.

...Unless he gets exiled, but that's fine. We have two Squees for a reason.

An ideal opening hand with this deck would be any combination of Faithless Looting/Insolent Neonate and things we want in our graveyard – which is pretty much all of our cards minus Nahiri and Tibalt. Speaking of Tibalt, our transfusion friendly friend is best dropped as soon as possible, which could well be turn two. He might outright die after netting you one card, but that would be it. The revenge this deck brings will be sweet and terrible when it goes off, and so it won't really miss Tibalt either way. His ultimate requires him to stick for five turns without taking damage before being able to go off, so that's not terribly likely to happen. That being said, a 'free' 5-6 damage right around the time your Demigods jump into the fray will definitely help nail the lid down on your opponent's coffin.

Just remember not to be scared to throw away an extra copy of a planeswalker if you need to – you aren't looking to have a mid-game or a late game, you're looking to win with all the explosive fury of a million stars collapsing into a singularity of rage. Rage!

With a few tweaks, a Standard version of this deck might be viable, but barring the Eldrazi titans and a few good enter the battlefield effects, I just don't feel like there are all that many creatures that Nahiri can take full advantage of. Besides Avacyn, of course.

That about sums it up for this week's entry. As with all editions of Screw Loose Brews, let me know what you think of Nahiri's Revenge in the comments section below!