After the fun I had last week looking at the history of the standard dreaded tribe of Faeries, I wanted to keep on that theme. So, we're going to devote the next few weeks to looking at some of the tribes in Magic. Give a little history on the tribe, and come up with a budget friendly list you can take and battle at your local FNM.

So, this week we're going to look at probably the most popular among the Magic: The Gathering Tribes... 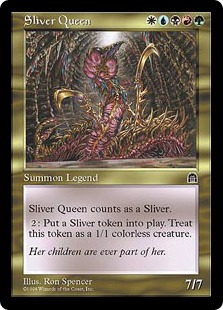 I remember when I first got into Magic during the Urza's Saga clock. There were Sliver cards who were the very definition of synergy. They all did different things, and they all gave their abilities to the other slivers on the board. At the time, I really didn't care about the history or what sort of creatures they were, all I knew was that they were cooler than the Borg ever thought of being.

“I love it when Slivers come together” - Volrath

Now, as I try to find the actual history of Slivers and how they came about and what exactly they are, it's difficult. Mostly because even in the Vorthos of Slivers there isn't much exactly known about where they came from.

What is known, is that there was a power hungry shapeshifter (maybe planeswalker?) Volrath who made his way to the world of Rath and came upon these creatures. He then proceeded to do what any crazy power hungry guy would do, and experiment on them. It's unknown as to the extent of what he did to them, but it's assumed they were alive and awake (ala Victor Frankenstein) and he tried to make his own Sliver creatures. They were, overall, no where near as good as the original.

Slivers have popped up here and there in the story line and in cards, usually as some sort of hive mind of creatures that roam free and generally do their own thing. The most recent iteration of Slivers were in M14 and M15 when Wizards decide to bring them back, giving some added power to the originals. 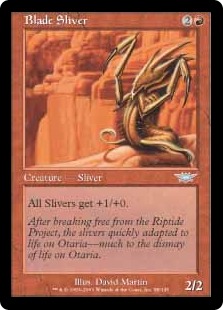 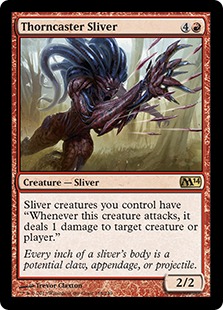 They did however, change a little. These new Slivers were more humanoid looking, and only benefited other Slivers part of their own Hive (or owned by the same controller) while the originals gave added abilities to all the slivers on the board (sometimes helping out the opponent).

From a competitive stand point, I couldn't really find anything where Slivers were a dominating force in any format, but that doesn't mean they aren't loved by the more casual bunch, and I'm told that the Sliver Overlord makes for a formidable EDH commander since you're able to just tutor up whichever Sliver you need for the occasion.

For my Budget Brew I wanted to keep it to a mostly three colour mana base. This might hurts us because we don't get the benefits offered by black and blue Slivers, however this does helps us keep our mana base efficient.

All told the deck runs right around $93 at TCG Market Price.

Here is a breakdown of this aggressive toolbox deck. 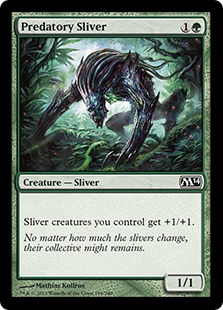 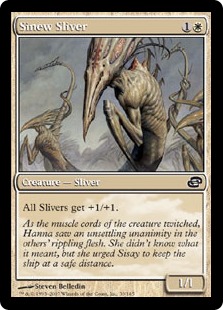 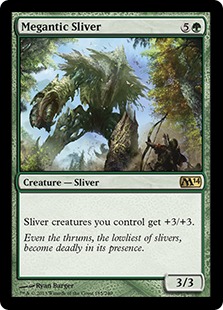 These make our Slivers better, tougher, and stronger. The one of Megantic defenitely isn't needed in the deck, and the expensive casting cost makes me not really want to add more than 1. Predatory Sliver and Sinew Sliver are the main ways our guys get bigger, costing only 2 mana they're an easy turn 2 play on the back of some of our mana rampers. 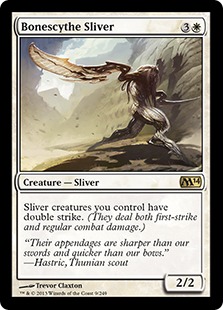 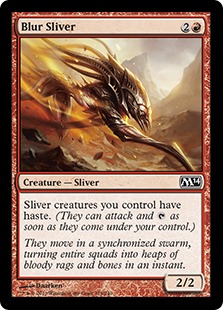 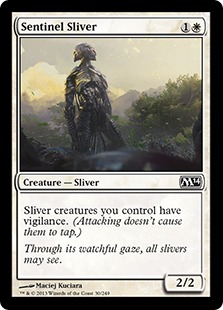 These guys are basically “spells” that have bodies. Giving them Double-Strike, Vigilance, and Haste all give our Hive added benefits that only add to their great aggressive nature. If you give me a creature with Vigilance, I'm never afraid to attack. 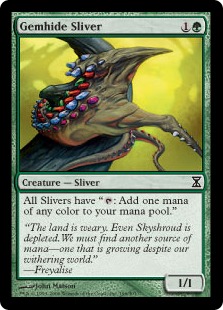 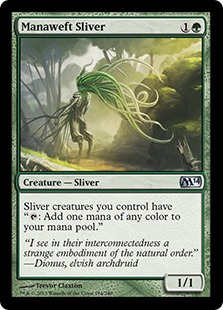 These guys are our mana ramp. We don't need cards like Birds of Paradise to help get our engine going which do nothing later in the game but chump block. Our ramp-creature is on steroids and only gets stronger as our board and game plan progresses. 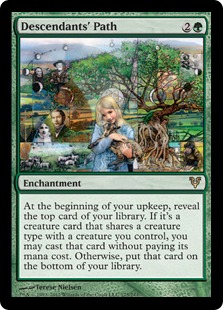 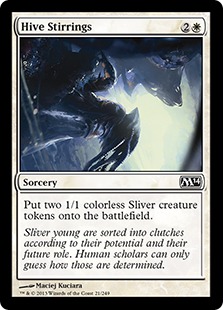 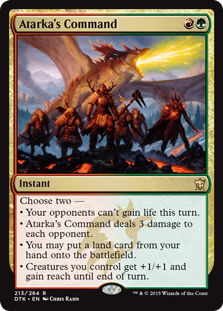 These are about the only things I'd consider running in a budget version of Slivers that aren't actual Slivers.

Descendants' Path is our version of Collected Company since it lets us sneak extra creatures out. With a total of 29 creatures, we're certainly going to hit more often than not.

Hive Stirrings is just a way that we can get a couple of extra bodies on board, and if we already have a small army of sliver these 1/1 vanilla Slivers come out as real threats.

Atarka's Command is a card seen in any aggressive strategy ever since it's printing, it gives us a bit of reach and buffs our team to end the game. It can also stop something that all aggressive decks hate; life gain.

A card that I chose not to include in my deck, but I've often seen in the spell slot of budget Sliver decks is Door of Destinies. The card can make our slivers the size of Eldrazi Titan's and may be something you decide to include in your version of the deck.

There's all kinds of possible upgrades for the deck...

Aether Vial making our slivers counter proof and letting us sneak them in during our opponent's turn can turn a Sliver into a combat trick with a body.

Cavern of Souls is something that goes in any tribal strategy giving us whatever colour we might need and paired with Sliver Hive would let us run more colours in our deck, opening up new possibilities.

That's all I got this week Budget Brewers!