Welcome new player, to the multiverse.

In the world of Magic the Gathering, you become a planeswalker. You are a mystical being with the power to travel between worlds. On your journeys you will discover new lands, creatures, spells, and artifacts all of which will help you when you come to do battle against the other planeswalkers that you meet on your travels. All of the things you encounter will each be represented by a different card in your deck.

Let’s start by taking a look at the most important card in the game. The basic land. 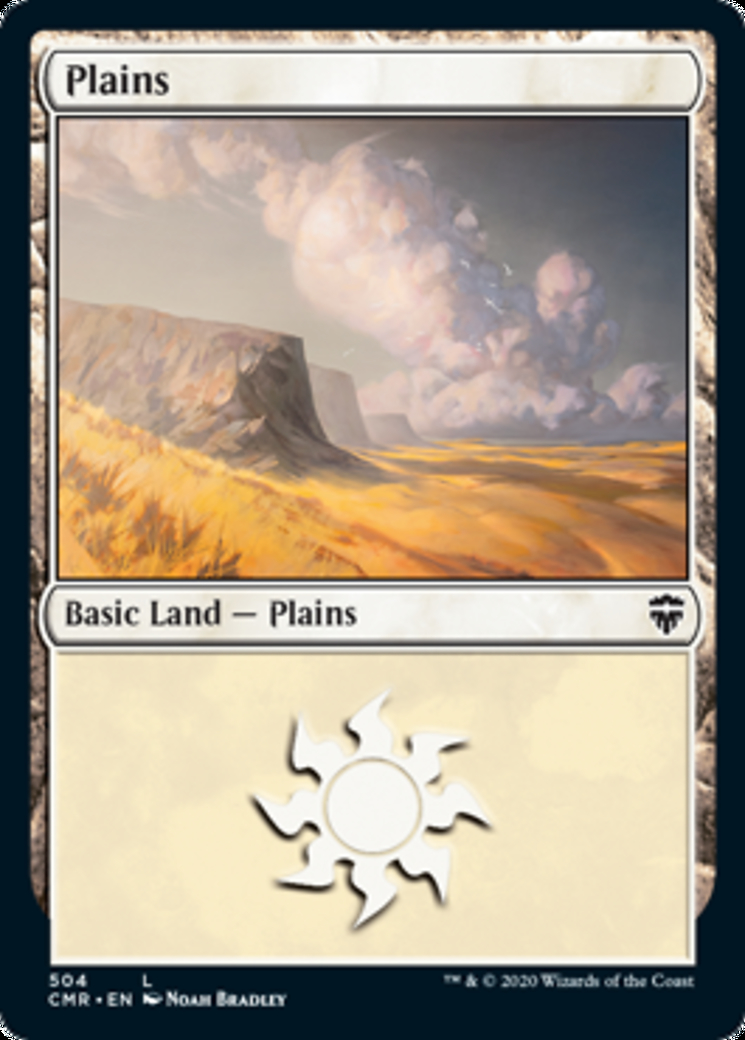 Planeswalkers develop deep connections to the lands that they have traveled to. This connection between the planeswalker and the land allows the planeswalker to use the land to produce mana. Mana is the basic resource that is used in Magic the Gathering to cast spells. Basic lands come in 5 different types, each type creates their own kind of mana. Plains create white mana. Island’s have the color blue. Swamp’s are Black. Mountain’s are red. Finally Forest’s are green. Each color of mana is associated with a different set of powers, which we will go over in a later article. For today's sake we will concern ourselves with only one color. White.

Each player is allowed to play one land on their turn. This controls the pace of the game. Land produces its mana when it is turned on a 90 degree angle, known as tapping land. once a land is tapped, its mana has been drained and it can’t be used again that turn. All tapped cards untap at the start of your next turn.

Moving on, now that we have our first land out we can start thinking about ways to defend ourselves. On of the ways to do this is with creatures.

Right off the bat you will notice some major differences between land and creature cards. First in the top right corner you will notice a creature’s mana cost. This is how much land you must tap in order to bring out a creature. In the case of a Yoked Ox you will only need one white mana in order to bring it out onto the battlefield, which means you can play it on your first turn. 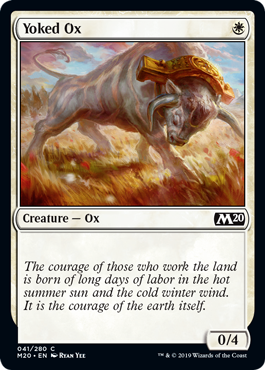 Gone now is the large mana symbol in the box below the type line. Replacing it in the case of the Yoked Ox is a text box. The text box for our ox is filled with italicized text known in the game as flavor text. Flavor text doesn’t affect game play, instead it gives you an impression of what is going on in the game world.

Other cards, like an Akroan Jailer, have rules text on them that allow you to modify how the game is played.

Considering our Yoked Ox is a 0/4 we may want to find a way to beef up our creature to allow it to do damage. There are a few ways to do this in a game of Magic the Gathering. The first way we are going to look at is Enchantments. 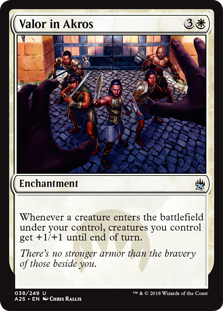 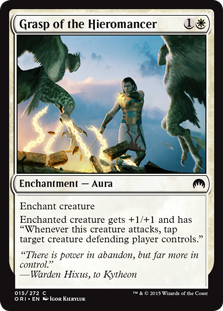 Enchantments come in two major flavors, enchantments and auras. Enchantments enter the battlefield and stay there, modifying the gameplay. For example, if you play Valor in Akros, afterwards whenever you play a creature spell all your creatures get +1 / +1 until end of turn.

Auras on the other hand, attach themselves to an enchanted card, and modify the gameplay of a single card. Grasp of the Hieromancer gives a creature two bonuses in the form of a +1 / +1 buff and the ability to tap down a creature during combat. These two combat tricks will takes our Yoked Ox from a petty blocker to a full fledged menace. 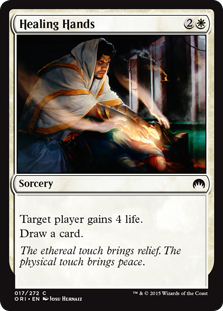 Not all spells target creatures. Some, like Healing Hands will target a player. Sorceries, like enchantments and creature spells, can only be played on your turn. Unlike them however, sorceries are not permanent which means they leave the battlefield once they resolve. Cards that leave the battlefield go to the graveyard. In the case of Healing Hands, we see it has two effects. One to have you gain life, a useful trick at any point in the game. The other is to have you draw an additional card. This is a powerful effect, as it gives you more options to choose from when selecting spells.

So far all the cards we have talked about are only able to be played on your turn, and only at certain points in your turn. This means that some of you're more powerful spells can only be played half the game. So, what happens when you want to play something on your opponent's turn? 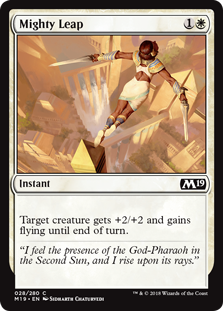 Well, then you go searching for an instant. Instants are powerful cards that can be used to respond to your opponent’s cards. Let’s say you are being attacked by a creature with flying. Under normal circumstances you would have to take the damage from an attack with flying. However if you had a copy of Mighty Leap, you would play it on your Yoked Ox to give it both flying (allowing it to block a creature that also has flying) and a nice bonus buff to keep your creature in the fight. Just like with sorceries, when the instant resolves it goes to the graveyard, and its effects wear off at the end of the turn.

The last type card you are going to run into while playing Magic the Gathering will be artifacts. 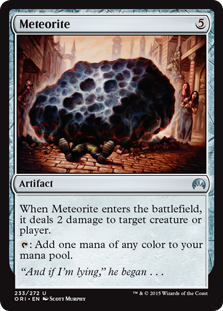 Artifacts come onto the battlefield like creatures and enchantments, and do not suffer from summoning sickness, meaning they can be tapped and used on their first turn out. Some artifacts have enter the battlefield effects, which trigger when the card comes into play. For example Meteorite come into play dealing damage to a creature or player, but can also be tapped for mana on its first turn in play, making it a powerful if not expensive card.

All these cards come together to make the game of Magic the Gathering. There are many ways to combine cards in Magic, with new interesting combinations of cards coming out with each new set. We will get into how to spot effective combinations in a later article. In the meantime please join me next week as we look how each person’s turn plays out in a game of Magic.