This is a reexamination of my article and deck that I've been playing regularly in paper and a little online: Lotus Field Storm deck in Pioneer. As my readers may be familiar, I'm a combo player and I have fallen in love with the lotus deck and its many variants. A few weeks ago with preview season in full swing, an innocuous red enchantment for two was spoiled. I was on a train ride home and saw a picture on twitter of this card. I think I read the image a dozen times and quite literally couldn't believe it. It verified on Reddit, WOTC official spoiler schedule, everywhere I could think of. After I verified it to my satisfaction there was a large jump for joy. 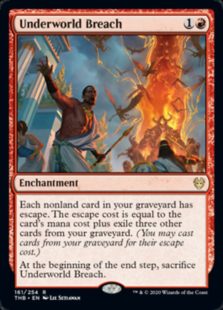 Firstly here is the card Underworld Breach . During my first examination, my mind was ablaze with options. My first goal was to find its new home in Pioneer. My initial thought was to include it as a 1/1 split main sideboard in my previous list. But after days of discussions with the people I would call my testing group as well as the excellent community in the Lotus Field discord, I decided that a completely new deck with new win cons would be assembled. Jace, Wielder of Mysteries was going to be my primary plan. It's casting cost is overcome by the decks Lotus Field mana, but I felt it was missing something.  And again a wish from above (WOTC) was granted a two drop with text on it that wins you the game when you have no cards in the library. 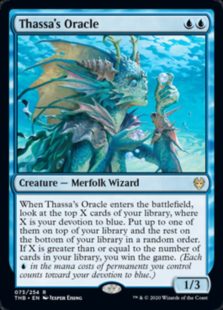 Thassa's Oracle - These three cards together was how I was planning to win games, matches, and tournaments in the upcoming weeks. I could feel it in my magic playing bones. I tried a few versions, proxying decks for testing with my friends but was still disappointed. They performed but was just an extension of the past shell with a few new toys, like an Aetherflux Reservoir in the sideboard, but was missing something to push it over the edge.  This past weekend again in transit I found myself confused and bamboozled that the Lotus Storm discord was up in arms about common from Return to Ravnica:  Chronic Flooding 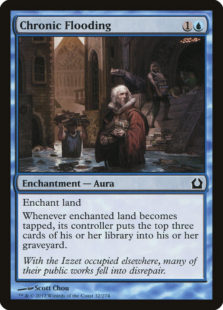 I just didn't see the role it could play. After some discussion with my discord mates and watching an afternoon stream by Kannister it was laid out to me. The tapped enchanted land was producing mana, and fuel to be used to escape Hidden Strings and Pore over the Pages and to eventually win the game with either Jace or Thassa's Oracle .

So a decklist was born, which you can find here!

First thing you might notice a noticeable lack of are Arboreal Grazer and Growth Spirals. I felt that these cards in my original wish gameplay provided a key role but I was uncertain that they would be needed in what I'll be calling V.2.  As well Mana Confluence has been placed into the deck in the former location of Breeding Pool. It is usually sacrificed to Lotus's ETB trigger but it has the distinctive ability to tap for red mana so Underworld Breach can hit the field. The next major alternatives are enchanting land cards. Chronic Flooding and Theros Beyond Death card Wolfwillow Haven . These enchantments provide two primary effects and are flexible. Also, the largest change is no more wish board. Fae of Wishes is gonna take a brief benching for now while I battle this deck in my local meta and an upcoming 1k!

So you've built this deck, you've sleeved it up and are ready for your first match of magic. What is it that you want to see in your opening hands? The cards you would like to see are a few non-Lotus lands, a cantrip of some variety, and of course the Field itself. Set up turns feel the same. One key learning curve I came across my first few matches was my eagerness to enchant the Chronic Floodings onto the Lotus Field right away. My experience shows this to be counterproductive.

Your first goal is to acquire a Lotus Field one other land and hopefully a Wolfwillow Haven on said Field. So when you start chaining spells in your deck you can find that Underworld Breach , and then you're on easy street. Early spells you should focus on after Breach is on the field are Hidden Strings and Pore over the Pages. Putting cards in hand in the graveyard is priority A, with floating additional mana being B.

A Brief Sideboarding Guide (what you really came for :p) 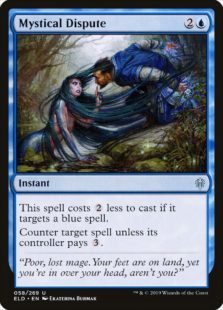 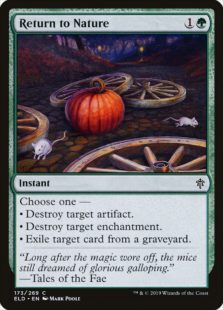 Mystical Dispute serve one clear purpose in this decks board: Counterspells. Board them in against Phoenix, UB, UW, and any decks that they want to say no. It is also good at countering sideboard pieces against us like Narset, Parter of Veils and Damping Sphere. I gotta tell you that countering a Damping Sphere is a sweet feeling. Like booping a very cute doggo.

Jace, Wielder of Mysteries is an alternate win-con you can board in against grindy matchups. With Underworld Breach he is definitely cast-able out of the graveyard and with quick loyalty uptick the game is over.

Blast Zone is a much harder card to evaluate especially due to you being unable to get it out of your graveyard with Underworld Breach . Either having it in your opening hand or Sylvan Scrying for it are great ways of having it to control an opponents hate pieces.

Good old Fog. What can I saw about Fog? It time walks your opponent for a turn and can sometimes bait them into committing more resources to a swing that will make you feel more confident about your win the next turn.

Return to Nature is a growing staple weapon in the green sideboard packages in Pioneer. It is instant speed, destroys artifacts, enchantments and has a "bonus line of text". This is one of the most flexible pieces of sideboard technology I've seen in a while.

My very brief testing against some of what are looking to be the new meta decks has gone well. The "Niv-to-Light' deck from my last article went through some modifications and is now looking like the deck to beat. And a rather long match with UW control earlier this evening went my way. My main takeaways from this deck so far are it needs practice. Put in some work, test with your friends at local events, and run some leagues online. I expect this deck to put up some results as the cards become more available, and I hope to see one of these lists at the top tables at PT Phoenix.

As always I'm looking for new brews to test. Next is likely going to be enchantress sweet stuff with all the additions from Theros Beyond Death. I'd highly recommend picking up these cards at Wizards Tower. They handled my pre-orders amazingly and I look forward to getting some more soon.