So after the past few weeks with PT Brussels, Nagoya, and Phoenix the meta has evolved and solidified. With all this new information it is time to delve back into brewing and hopefully find a new deck to attack all those Inverter of Truths and Underworld Breaches out there. But what tools do we want to attack those troublesome decks as well as Swedish Sultai, Mono-Black decks and all those other spicy brews out there?

At this point in how the meta has developed, I tried many decks over the past few weeks. I started with a Rally the Ancestors deck that I really tried to make functional in this meta, but it wasn't fast enough no matter how I built it. I even tried a few of the 5-0 lists from the weekly deck dump but none sparked anything in my playtesting. After a few deep dives into the many Pioneer communities, I found some discussion about a Rakdos Control list that hopefully would be able to attack the combo decks and provide a tough matchup for everything else.

After some searching, I found a sweet list on MTGTop8 and all credit to its owner Hoshino Tomoyuki who it seemed had top 8'd a Pioneer tournament at Hareruya in Japan.

Their list seemed to be doing what I wanted to do. So I jammed it as much as I could to try to find weaknesses and anything I could shore up.

This is my list after about fifteen matches. So far it has yet to lose a match to UW Control or Lotus. The deck does have some trouble with Inverter but is capable of defeating the deck with the right hand, so there's definitely room to grow in that matchup. Let's breakdown the list and talk about a few of the card choices that have been made and how they perform in the current meta. 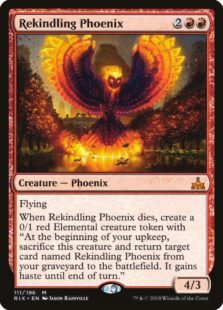 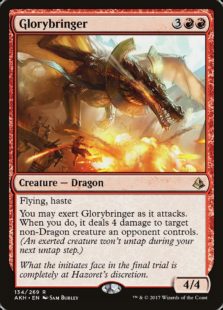 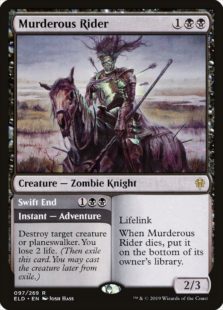 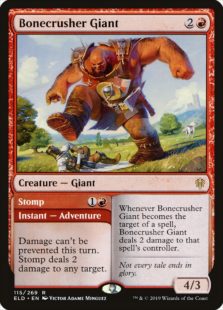 Rekindling Phoenix and Glorybringer these two are versatile threats that provide a lot of the damage you are going to put on your opponent. Rekindling Phoenix like its namesake doesn't stay dead for long and requires some extra work to fully get rid of.  I think that if Inverter and Breach weren't around it would be seeing quite a bit more play. Glorybringer is just a truck of damage and options. It puts an immediate threat on the battlefield with haste and can clear away a lot of threats with its exert. Murderous Rider and Boncrusher Giant serve a dual purpose. They're removal, direct damage, and large threats that need to be dealt with. Both are good in a variety of matchups and are as flexible as the threats you will face down in Pioneer. 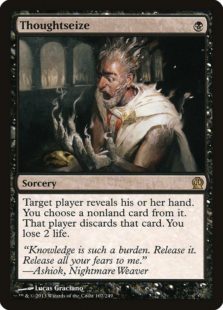 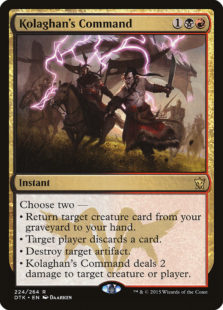 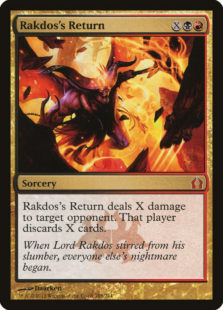 The discard "suite" of the deck comes in a few forms. First, there's the spell-based discard in Thoughtseize, Kolaghan's Command, and Rakdos's Return. These cards provide many options and variables that you'll need to take advantage of.  Thougtseize is one of the most complicated cards I have ever played with. There are so many decision points and even a small miscalculation when deciding when you cast it can affect the rest of the game. Kolaghan's Command is likely the best Red Black card every printed. It offers flexibility to deal with almost any threat that you might come across while giving you possible card advantage by regrowing a creature. And not to be overlooked is a way to force an opponent to discard at instant speed. Rakdos's Return really benefits from the end of the planeswalker redirection rule. It now can damage a planeswalker and forces that planeswalkers' controller to discard X. 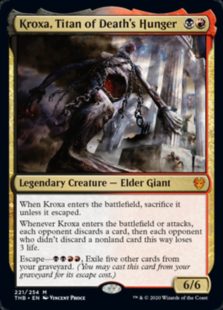 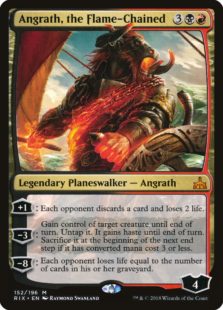 The permanent based discard in the deck are Kroxa, Titan of Death's Hunger and Angrath, the Flame Chained. Kroxa is sadly underplayed right now in Pioneer. It quickly takes a card out of your opponent's hand, possibly zapping them for three life (I typically see this as a bonus). So far escaping Kroxa hasn't been too hard to do and usually ends a game quite quickly.Angrath, the Flame Chained was a pet card of mine in Standard and so far has been a great addition to the deck. Making your opponent lose two life and discard a card is a great uptick, and it's threaten effect works quite well in this format.

The Odd One's Out 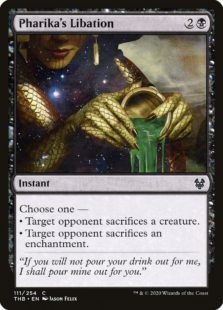 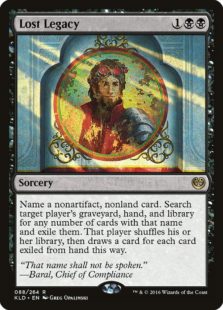 The last cards I'm going to go in-depth about are Pharika's Libation and Lost Legacy. Libation is a bit of a weird card. It provides a nice instant speed edict but so far its best uses are a mainboard way to win against Lotus Breach, making them sacrifice their Underworld Breach can dash their hopes of storming off. Lost Legacy is in the mainboard to steal games. A turn three Lost Legacy against Lotus Breach or Inverter will end the game. In most matches, you can name a key card like Uro, Titan of Nature's Wrath , Teferi, Hero of Dominaria or many others that will put the matchup tightly in your hands.

Lotus Breach is a very common matchup in the meta, so I knew going into my matches against it that game one was going to be rough. Key plans are to keep hands with Thoughtseize. Be prepared in knowing that the first game is unlikely to go your way. Post board though with ten cards coming in, your opponent is not going to have as much luck. Alpine Moon naming Lotus Field and Damping Sphere all but shut off the main engine of their deck and Ashiok, Dream Render will end their graveyard shenanigans.

Vs Inverter of Truth

So far this is the hardest matchup I've played their combo requires the least amount of moving pieces so top decks are great for them.  Hand disruption works great against them due to it adding another card into their graveyard which will be one more card for them to need to get rid of to win with Thassa's Oracle or Jace, Wielder of Mysteries .  Key Thoughtseize targets are Dig through time and Inverter of Truth hope for that game one Lost Legacy .  The side board is a bit interesting use spyglass to shut off Jace's +1 but its passive will still apply.  To win this matchup go aggro and hopefully your discard spells will hit good targets.

Sideboarding in this matchup is a little light. You have a ton of hand disruption in the main and means of interacting with planeswalkers.  So if you get paired against it you shouldn't feel too bad prepare to use Kolaghan's Command aggressively and to bait out a counterspell.

So far the matches that I've played have gone my way. Having an aggressive removal package that transitions into creatures in Bonecrusher Giant and Murderous Rider, and planeswalkers that affect the aggro matchups lead me to believe this is a great matchup. Be prepared to spend your hand disruption taking their own hand disruption.

This is a challenging matchup, they have a variable threat package and although your removal pairs well against them sometimes creative plays are what you need to win. Post board Ashiok Dream Render is a no brainer include same with Kalitas, Traitor of Ghet being able to permanently remove threats is the way to go in this matchup.  I board out Lost Legacy because I don't see this as a combo matchup, yes grabbing Uro would be great but it so far hasn't been necessary to win the game.  Pharika's libation loses a lot of its power when they typically have aSatyr Wayfinder that they can throw away and not feel bad about it.

Mono-Red is a brutal slog. The first few times I played against it the deck was having trouble, even with the main-board removal package. Originally the sideboard didn't have the Gifted Aetherborn but after slamming my head against the Red menace I re-added them to my sideboard. They provide some very needed lifelink and the ability to trade with a prowess pumped threat is a boon. Kalitas, Traitor of Ghet is a pretty self-explanatory inclusion. With an aggressive removal package, it helps to create blockers for you and its lifelink is no joke. Key things to keep in mind in the matchup is that slow threats like the Angrath, the Flame Chained are going to risk you the game. A reminder that against swarming creature decks, Pharika's Libation is never going to hit what you want.

To round up what I've learned playing this deck so far is that it is a contender if the meta sticks where it is right now playing a heavy hand disruption deck is the way to go. You'll be able to attack the combo decks of the format while having a great removal package for the aggro decks in the format. I'm planning on jamming this a few more weeks and seeing if my great results with this deck are an anomaly, but I definitely expect to see this deck at upcoming Pioneer tournaments.