Have you ever been so angry at your opponent that you wished you could have just beat them over the head with their own board state? Well do I have some good news for you, because now you can!

In fact, not only can you smash your opponent with their own stuff, but you can throw your cards straight at their face with this new deck. How? Well it's all thanks to a little card named Fling. It's kind of like taking a game of Magic and turning it into a game of football instead!

It's fun stuff, but it shouldn't be taken too seriously because your opponent can shut it down pretty easily if they have the right cards, or manage to just go off faster. Still, if you're looking for a great deck for entry-level players, or just something that's just janky fun for your mid-level playgroup, this one's for you.

So, what's the deck list? I'm glad you asked.

Do you see what I'm doing here? Well, let me draw up the play for you.

You can play the slow game with cards like Hijack and Wrangle and smack your opponent in the face with their own creatures. You can also go with the Hail Mary play and drop Kari Zev's Expertise into Fling then follow up with, say, a Torment of Hailfire! If that's still not enough, while you're hitting your opponent with all of these sorceries you can control how they play with a Harsh Mentor on the board (and pocket a tidy little Abrade).

But let's say you're drying up and you can't pick up enough Flings. Or maybe you don't have enough mana to make a Torment of Hailfire play worth it. You can always thin out an opponent's board state by taking their creatures while Hazoret's Favor is on the board, allowing you to make those captured baddies stronger and sacrifice them after. 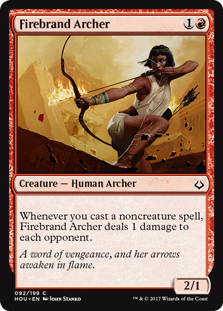 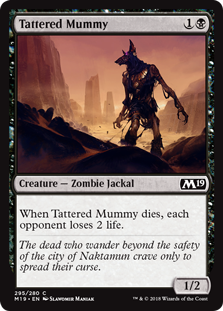 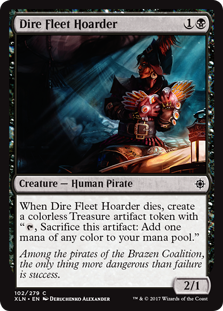 I included Firebrand Archer to make casting all these instants and sorceries worth it, while Tattered Mummy and Dire Fleet Hoarder are there to serve as chump blocks. They can also serve as beneficial Fling targets in the case of someone actually seeing this deck coming, or sideboarding for it.

The Mummy in particular is just straight up nonsense because the two damage from it dying cannot be prevented unless you prevent all damage, and there aren't many people mainboarding something that does that. 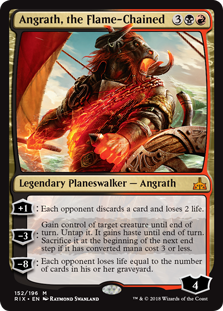 Angrath, the Flame-Chained was just an excuse to splash in more black, plus he serves as a nice top-end that supports the whole, "steal your things and smack you with them" gimmick of ours. Again, keep in mind, this is a casually-minded deck that isn't really meant to be taken to an FNM for anything beyond the surprise factor. Trust me, the first time you snag a Ghalta, Primal Hunger and Fling it at someone after they spent time ramping or cheating it out? You know someone's going to be talking about it.

Personally, I live for this kind of simply effective deck. The ones that aren't meant to change the local meta or go X-0 at FNM. I just want to have fun and get the initial shock value when the combo goes off. That's why I've always tried so hard to make mill work and that's why my exert deck worked fairly well in casual situations.

Oh, and did I mention that for a playable deck it's also fairly cheap? So go long, and get ready to Fling!