Pirates? In Magic? Is this the real life, or is this just fantasy?

Oh, it is real? And should people stop taking any excuse to quote Bohemian Rhapsody? That doesn't really matter to me... to meeeeeee...

But yes, Pirates galore, me hearty! Admiral Beckett Brass, Captain Lannery Storm, Dire Fleet Captain and a whole host (or should I say fleet?) of creatures have arrived with the Pirate subtype, and I fully expect them to give Dinosaurs a run for their money.

These primarily Grixis-coloured swashbucklers are the epitome of piracy. With names like Marauding Looter), Hostage Taker, Deadeye Plunderers, and Dire Fleet Ravager, you just know they prefer partying over parlaying.

This brew stems heavily from my experience playing God-Pharaoh's Gift in pre-Ixalan standard. Namely, use Champion of Wits and Strategic Planning to dig your way to a Gate to the Afterlife while filling your graveyard, ???, win the game. Of course the '???' is the good stuff, and usually involves being aware of when to chump block and when to take some beats. The goal is to get a God-Pharaoh's Gift online as soon as possible and start pumping out 4/4 zombies.

Of all the decks currently in standard, I think the GPG Reanimator archetype is among the most rotation-proof, with most lists only losing Thraben Inspector. That being said, there are so many varieties of GPG Reanimator floating around out there that it's almost impossible to make a blanket statement about them, and of course we can't forget all the new graveyard hate cards introduced with Ixalan. This black/blue brew is just another fish in the pond. 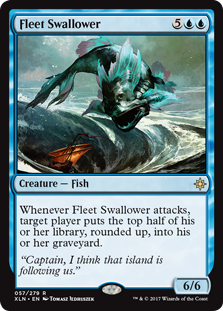 Speaking of fish, how about that Fleet Swallower? A 6/6 for seven that mills target player for a whopping 50% of their library when it attacks is monstrous. In a deck that actually wants you to dump a bunch of its contents into the graveyard, that monstrosity multiplies immensely.

With no evasion and in a deck without traditional ramp, the soonest this big fish would be swallowing any fleets would normally be turn eight. With a little luck, this GPG Reanimator can bring that down to turn seven. With a lot of luck, it can do it on turn six. A few attacks from this guy is enough to close out a game - Your opponent can't do much if they don't have any cards left to draw.

However, two blocks worth of cards with Aftermath may prove to be your downfall. Milling your opponent in the current Standard meta means you might be giving them immediate access to Aftermath spells, but it also means you're taking away almost everything else. Early on, you may even want want to point the fish at yourself - but in the mid-to-late game, swinging in with these two or three times should be enough to lock out a match.

Anyone who has played a lot of the traditional UW GPG Reanimator (Holy acronyms, Batman!) has likely told you one key thing about the deck: It doesn't interact with the opponent. And that's very true, and is the reason why I chose to lean into an Esper build myself. Enter Hostage Taker. 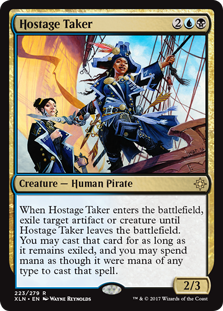 This guy is like Gonti, Lord of Luxury and Fairgrounds Warden rolled into one. When he enters the battlefield, he exiles target creature OR artifact until he leaves the battlefield. While that creature or artifact is exiled, you can cast it by spending mana of any colour to do so. On curve, that's not so great - but if you can get Hostage Taker to come into the battlefield for free via God-Pharaoh's Gift, suddenly the opponent's half of the battlefield becomes a shopping mall. I'll take a Verdurous Gearhulk, a Rogue Refiner, and speaking of which, how much Energy are you sitting on? That Bristling Hydra looks niiiice...

The point being, this guy makes any creature or artifact yours for the rest of the game if he doesn't get blown up before you get to spend your mana, and that's a tempo swing that your opponent will have a hard time recovering from - especially since you can potentially do it up to eight times in a single game.

Deadeye Plunderer pulls double duty, bringing pirate booty and getting stat buffs just for existing at the same time as your Treasure tokens and your Gate to the Afterlife or God-Pharaoh's Gift. He can also act as a mana sink to help pay for the cost of the victims taken by your Hostage Taker, or just to help you dump your hand out onto the board when you need to. It can also help offset the cost of the next Pirate addition: Daring Saboteur. The Saboteur is a quaint two-drop that gives early access to looting if he's able to connect, and can be made unblockable for a three mana investment. An unblockable 2/1 that loots when it connects is okay. An unblockable 4/4 that loots when it connects is great. 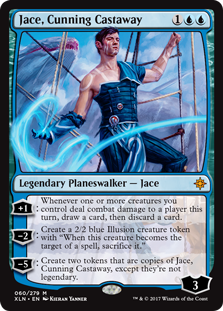 The final Ixalan addition to this brew is Jace, Cunning Castaway. This guy just feels like he was meant to go in a GPG shell. His +1 lets you loot whenever your creatures manage to connect with an opponent's face, which this deck loves to do. His -2 makes a flimsy blocker in a pinch, and there's not really much more to say about that. His ultimate, if resolved, gives you two more copies of Jace - copies which will pretty much do the exact same thing as the first version. But truth be told, while a good fit, this may be one of the least powerful Jace Planeswalkers we've seen to date. Then again, I haven't seen him in whatever godly powerful unblockable-oriented Merfolk decks that are waiting to be unleashed on Ixalan Standard.

For fun, and because it just had to happen, I turned the sideboard into a treasure hunt. Prosperous Pirates and Revel in Riches give you a sudden "I Win!" condition against decks that are trying to do the same to you (I'm looking at you, Approach of the Second Sun players). Jace's Sentinel and a second pair of Jace  ensure you're getting early attacks and loots in, setting yourself up for a Gate activation sooner rather than later.

Will pirates be the real deal, or are they just allies with cooler names? Only time will tell, but thanks for sharing this piratey brew, and be sure to leave your comments below!