Hi, my name's Craig and I am hooked on Jeskai Ascendancy!

Seriously, I just can't seem to move away from this card. When it comes to my Standard deck building thoughts, I want Jeskai Ascendancy in everything, hell... I'd even try to jam it in my Modern Jeskai Geist deck if I could, but since I can't here we are.

At the end of the article, I'm also going to be following my latest little project. I'm taking my Budget 8 Rack deck, switching it over to Legacy, and doing Alters... but, more on that on the bottom of the article.

First, let's do a quick overview of Value Town:

It's a three drop card, that loots, buffs your team, fuels Treasure Cruise (there's not much time left for us to play this card!) and for added funsies gives our team a pseudo-Vigilance.

The card had quick combo implications in both Standard and even made splashes in Modern when Treasure Cruise was legal, since the deck is still around in Modern a bit, but it's not at the same power level.

Then in the 2014 Worlds Championship Yuuya Watanabe used the card for full value, leaving the combo implications to the side. In a Jeskai Tokens shell he aimed to go big and wide and just overrun the opponent with 1/1's that turned beastly. Paired with something like Jeskai Charm to buff your team an extra +1/+1 and Lifelink, means you'll be in the green for a little bit.

This is what we're going to be looking at tonight with our Budget Brew. It's a whole different meta than it was a year and a half ago, and it's filled with decks like Jeskai-Black and 4-Color Rally decks, and well.... other 4 color decks.

The deck of choice doesn't have the all-star cards it had at the time either, Stoke the Flames which gave what amounted to four free damage to the face, as well as setting off Jeskai Ascendancy, nor does it have something small to the ground like Raise the Alarm. Does the mean the archetype has to be dead?

I say, no.
We still have the following Token Generators: 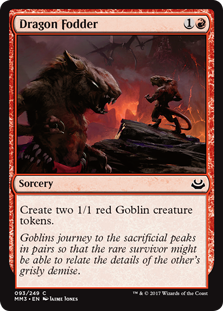 And for our instant speed tokens: 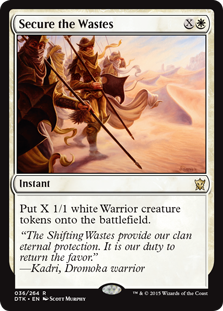 Which okay, this can be played turn two like you used to with Raise the Alarm, but that X in the casting cost is kind of telling me,  'No, wait.' Though, if you need to, you can always cast it for zero to loot with Jeskai Ascendancy and buff the team at instant speed, though it's not really where you want to be with the deck.

This, my friends is also the most of expensive card in this week's Budget Brew.

Total cost on WizardTower.com: $100CAN, or you can buy it Online for about $34tix (CAN)

Things to make the deck better?
We're taking some pretty big concessions in not playing Fetch lands, so we have a few Evolving Wilds and depending on what kind of draw you have, it could be exactly where you want to be turn one. It's not likely with a deck running Monastery Swiftspear that turns into a little bomb with Prowess + Ascendancy buff, and we're running six pain lands so I figured Seeker of the Way is a good spot to be, who not only turns into a bomb like Swiftspear, but he gives the added benefit of giving himself Lifelink when you set prowess off.

You could also easily take out the non-token creatures and slot in Planeswalker greats like Sorin, Solemn Visitor and Gideon, Ally of Zendikar which both would be power houses in the deck. Something like Narset, Enlightened Master could also work quite well. Something like Hordeling Outburst with rebound sounds like a good time.

Not having many dual lands is really the biggest thing we're taking a hit on to keep the deck budget friendly. Otherwise, it's not that expensive by itself.

Our Sideboard tech is pretty straight forward, we can either not let things resolve, or we can punish the opponent for playing creatures which helps us let our creatures through. We don't really ever want a Siege Rhino to resolve, and if he's going to resolve, we at least don't want to keep it on the field for very long. A 4/5 with Trample running over a sea of 1/1's isn't my idea of a good time.

Okay, now... it's our favorite time of the article, to take our sweet little budget brew and send it out into the Wild West of Xmage and see how our list stacks up in some casual games.

Game 1 - U/G Takin' Turns - 1/2
Okay, we lost our first game of the night which never feels great, but to be fair.... well, he takes a lot of turns and plays a lot of things. Game 1 I had it all, rode a Seeker of the Way and 2 Goblin Tokens with a Jeskai Ascendancy to the win. Game 2, I had him down to six when he plays a Crush of Tentacles and wipes my tokens clear. I SB'd all of my Disdainful Strokes, but never saw any of them this game. We were at a stare down for awhile where if he swung, he would have died on the crack back and vice versa, and ultimately his cards are just more powerful so he was able to get us.

Game 2 - Mardu Green 1 / 2
Alright, this match was close. Goblin Dark-Dwellers is an amazing card, and I can see why it's pushing Modern Goblins to be a thing. We pushed the aggro start but once they were able to fight back and equalize, they were able to level off and beat us. The flooding also seems to be real.

Game 3 - R/B Dragons 1 / 2
Them using Grasp of Darkness on a 1/1 goblin token we made from Hordeling Outburst feels like a win each time, and it's another game of how we get so close to winning the match, and then... losing.

Overall, the deck is fun to play and if you're able to make the improvements by using some Planeswalkers, do it, it'd easily push the deck into something semi-competitive. Either way, the deck is a blast to play, and looting through your deck and pumping your team is endless fun.

Alright, last week for my slacking off I promised some bonus content, well here it is: I'm going to altering one of my very own Budget Brews. The whole deck is getting painted. Now, I'm not really the most artistic person in the world, but I am a trained chef and worked in restaurants where the plating and looks of the plate matter just as much as the taste of the food you're dropping three hundred bucks on.

What am I going to have the deck look like? Well... I'm not going to spoil the whole surprise, but here's a little preview picture:

Yup, it's one of my daughter's favorites movies and it's something that flavor wise I figure fits with an 8 Rack deck. So, what the heck? Why not turn one of my pet decks into something that looks awesome?

The technique I'm going to be using is Carbon Transfer, something I found that Klug is known for doing, and from everything I've read he's considered one of the best in the altering business. Here's a little “how-to” article Klug wrote, that I'm going to be following.

This is something I'm doing purely for me, I'm not going to sell it or looking to make money off it at all, just something I want to do for a bit of fun. I'm honestly not sure if it'll even look good, but hey... here's to hoping!

Thanks for joining me while I untap the multiverse and I look forward to brewing up something for next week!