Hey all, welcome to the return of the light in the battle of good versus evil as we continue our voyage through Innistrad in the Daily Dose of Eldritch Moon. For the past couple of days, I’ve been looking at the return of the Eldrazi and how Emrakul is becoming a wrecking ball throughout Innistrad. Today, I’ll take a look at a hero looking to stop the madness running through the plane.

So far in this block, we have seen the return of some Legendary creatures from the first Innistrad block such as Avacyn and Sigarda. Now we are seeing the return of a very popular character, Thalia. Let’s first see what Thalia looked like in the original Innistrad.

A great legendary creature that slowed your opponents from playing all of their non-creature spells. Now let’s have a look at a card that was popular in the Gatecrash set, Blind Obedience: 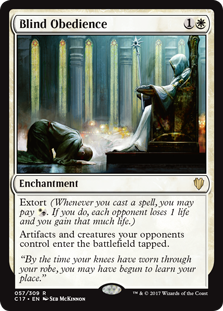 This card was used as a way to gain lots of tempo and make it very hard for your opponent to play defense as all of their creatures enter the battlefield tapped and unable to block.

Now let’s have a look at the brand new Thalia, Heretic Cathar.

Now this is a creature that I can get behind! Thalia has combined with the power of Blind Obedience to provide a creature that will make it very hard for your opponent to muster any sort of defense against your attack. Just imagine playing Collected Company in response to your opponent casting a creature, and hitting Thalia, Heretic Cathar, causing your opponents' creature to come into the battlefield tapped. You will then have an open path during your turn to attack for lots of damage.

Next, we will be looking at a new version of one of the most popular creature types, Shapeshifters. Here is the new Identity Supplanter.

Identity Supplanter
2UU
Creature – Shapeshifter
Whenever Supplanter of Identity attacks you may exile another target non-token creature. If you do, Supplanter of Identity becomes a copy of that creature until the end of the turn. Return the exiled card to the battlefield under its owner's control at the beginning of the next end step.
0/3

What great flavour and art for the new card. This is a combination of a Clone and a Doppelganger that is able to change into whatever it wants. If you have a great creature with an enters the battlefield trigger you can use it to copy that, so when the exiled creature returns during your end step, you will get the value of its trigger. You can also use to exile a large blocker on your opponent’s side, making it very hard for them to stop your Shapeshifter from getting through. I’m more of a fan of Shapeshifters that have the clone affect rather than those that often change. I’d rather have it permanently be the creature than need a trigger to turn it into one. With an 0/3 body, there is a good chance it won’t even get to attack before it’s been killed by your opponent.