Welcome all to a brand-new season of the Daily Dose! This season I’ll be talking about the new set Innistrad Crimson Vow. That’s right, it’s time for the wedding of the season as all the Vampire families are coming together on Innistrad to witness the marriage between Olivia Voldaren and Edgar Markov. We just witnessed Innistrad Midnight Hunt, which focused on the Werewolves of Innistrad, but in Crimson Vow the focus changes to the creatures of the night, Vampires. There are four major Vampire families on Innistrad with Voldaren, Stromkirk, Falkenrath and Markov. Today I’ll be talking about characters from two of those families with cards featuring the return of Sorin Markov and Olivia Voldaren. We did get a tease of some Vampires in Midnight Hunt and I’m interested to see how this grows in Crimson Vow. 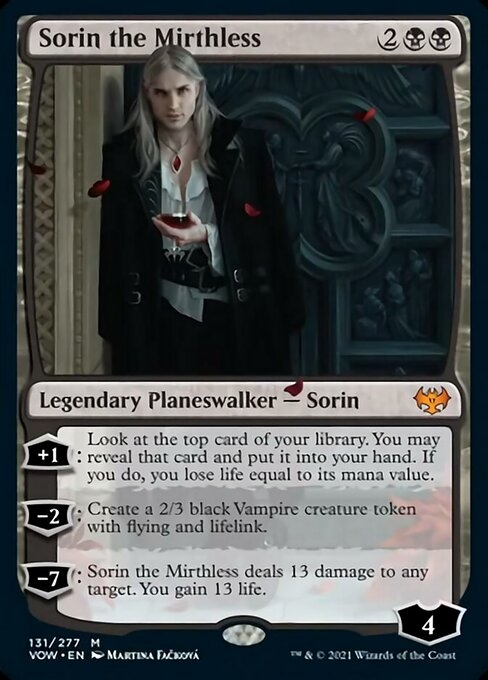 He may be acting all casual and enjoying the party, but don’t let Sorin fool you with his cool demeanour. Sorin the Mirthless can do some damage by summoning some Vampires to do his bidding. Let’s break down the abilities for this planeswalker.

+1 : Look at the top card of your library. You may reveal that card and put it into your hand. If you do, you lose life equal to its mana value.

What I really like about this ability is that you don’t have to put the card you look at into your hand. You can either not put it into your hand so that you can mill it with another spell or leave it on top so that you don’t lose a large amount of life from drawing a high mana value card. If there's Land on top of your library, that's free value and will help with your card selection without costing you any life.

-2 : Create a 2/3 black Vampire creature token with flying and lifelink. – Once you’ve lost some life drawing cards you can create some lifelink Vampires to help you gain some of that life back. It’s close to being a Vampire Nighthawk token, but it can still protect Sorin the Mirthless and the tokens can be used both as good attackers or blockers.

-7 : Sorin the Mirthless deals 13 damage to any target. You gain 13 life. – Four turns after casting Sorin the Mirthless you can use its ultimate ability to hopefully finish off your opponent. If they are above thirteen life you can still create a twenty-six life change with just one ability.

With its ability to help you gain card advantage, I think Sorin the Mirthless will see some play in the new Standard environment in the coming months.

Let us wait no longer and greet the bride-to-be. Here is Olivia, Crimson Bride. 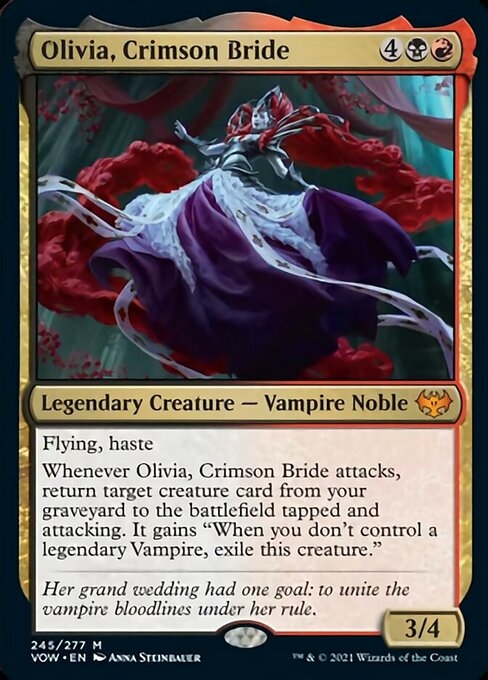 This is one of those cards that can win you a game out of nowhere by allowing you to attack with two haste creatures for only six mana. The amount of power you get to attack with is based on how you build your deck to help yourself get powerful creatures into your graveyard. Before I talk about the possible creatures in Standard that you can reanimate, one thing to note is that the creature you are reanimating and attacking with doesn't die during your end step. This is a permanent reanimation that will add significant power to your side of the battlefield (As long as you have a Legendary Vampire of course). Here are some of the best targets for reanimation that could be included in an Olivia deck.

Beledros Witherbloom – On top of getting five extra damage in, you will start to make some Pest creatures every upkeep. If you really need to you can also untap your lands to deploy even more threats.

Burning-Rune Demon – Not only does this attack for six damage, but it fuels your graveyard for your next attack by adding more threats into your graveyard.

Dreadhound – Another creature that attacks for six damage and will help you by milling potential targets into your graveyard.

Inferno of the Star Mounts – This is a great Dragon to have in your deck anyway, so why not use it as a sweet reanimation target as well?

Red Dragon - This will allow you to do an extra eight damage thanks to its enter the battlefield ability but it won’t be as good as some other targets after its first attack.

Tiamat – Why not turn your deck into a Dragon deck with Tiamat. This will allow you to put five Dragons into your hand and an extra seven damage from its attack power.

Velomachus Lorehold – This Elder Dragon will not only give you five extra power but could allow you to cast a powerful spell from the top of your library when it attacks.

There are many more fun targets to choose from but those are some of my favourite reanimation targets from Standard as we see it now. It would also help to add some other Legendary Vampires into your deck to help make sure your reanimation targets stay around even if Olivia, Crimson Bride is removed from the battlefield. Not including what’s coming in Crimson Vow, you could include the following four Legendary Vampires in your deck: Florian, Voldaren Scion, Valentin, Dean of the Vein, Zagras, Thief of Heartbeats, and Drana, the Last Bloodchief. It’ll be exciting to build a bigger version of the Rakdos Vampire deck with Olivia, Crimson Bride.

There you have it folks! You have your first look at some of the new cards from Innistrad Crimson Vow. Thanks again for reading the Daily Dose of Crimson Vow. Join me on Monday as a new week begins with a ton of new cards to talk about from Crimson Vow.