Welcome to another edition of the Daily Dose of Oath of the Gatewatch, where today we will be talking about more cards to support all of the Allies of Zendikar!  In Battle for Zendikar there was a large number of Allies that worked together with the Rally mechanic to help all of your creatures towards victory.  In Oath of the Gatewatch, they’ve added more ways for Allies to work together with a new mechanic and tons of more Ally creatures running around the battlefield.

In Battle for Zendikar, Munda, Ambush Leader allowed you to look at the top three cards of your library to get more Ally creatures into your hand, but you were limited by randomness on which ones you could get.  A lot of the times, if you are playing an Ally deck, you will have a one of Resolute Blademaster that you need to finish off a game.  Now, there is an Ally creature that will not only help you search for the Ally you need, but help all of your Ally creatures once he’s in play.  Take a look at General Tazri: 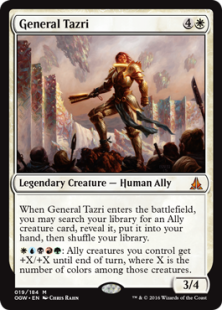 We finally get an Ally that can go get any Ally creature card from your deck that you need to help build your army.  Then - if you are a true Ally master and are playing 5-colors - you are able to pump up all of your Ally creatures to blow out your opponent in one massive attack.  Even though that last ability will not get used very often, just being able to tutor for any Ally creature card is some major card advantage.

In Magic Origins, they gave us a card called Relic Seeker, that when Renowned, allowed you to search for an Equipment card and put it into your hand.  The problem was that there weren’t very many Equipment cards you wanted to search for.  In Oath of the Gatewatch, they have given us an equipment that not only you want to search for, but is made for Ally decks.  Here is Stoneforge Masterwork: 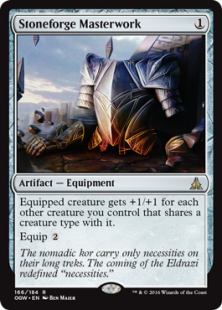 Here is an Equipment card that is tailor-made for Ally decks. It allows one of your Ally creatures to get very large, very quickly, thanks to all of the Ally creatures on your battlefield.  You'll want to use this in conjunction with cards that pump out lots of little Ally creatures like Retreat to Emeria, Gideon, Ally of Zendikar, and Unified Front for maximum effect.  The knock on Ally creatures can be that if you don’t have a Rally effect, they can be hard to attack with.  Stoneforge Masterwork will allow you to always keep on the offensive.

Rally was created to help Ally creatures have more of an impact on your creatures each time one would enter the battlefield.  In Oath of the Gatewatch, teamwork is key! The best example of this is the new mechanic Cohort as seen on Munda’s Vanguard: 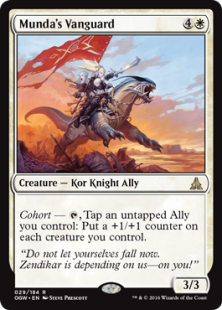 Thanks again for reading another edition of the Daily Dose of Oath of the Gatewatch and I look forward to seeing you all again tomorrow for some more preview action from the newest set on the block!