Daily Dose of Oath of the Gatewatch – Time to Take the Oath!

Welcome all to another edition of the Daily Dose of Oath of the Gatewatch! Today we will be looking at some new enchantments that make you want to play some Planeswalkers.  In a lot of sets, Magic often releases cycles of cards like Shocklands, or Charms that define the way a set is played.  In Oath of the Gatewatch, they’ve come out with a cycle of cards that could define how decks are made going forward.  Let’s take a look at a cycle of Oath cards from the new set: 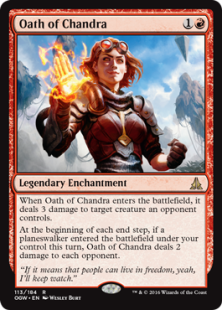 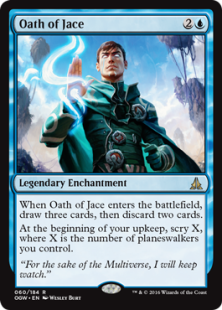 They’ve created a cycle of Legendary Enchantments that encourage you to make that Superfriends deck you’ve been debating about for the past few months.  I’m going to examine each card based on the following questions:

How good is it's enter the battlefield ability? 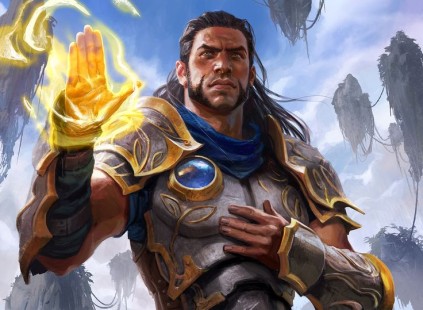 Oath of Chandra – Two-mana to do three damage to a creature is similar to spells like Lightning Strike and Incinerate.  It’s unfortunate that you aren’t able to hit your opponent's face with this ability, but being able to kill some early threats when this hits the board will be nice.

Oath of Jace – Three-mana to be able to draw three cards and discard two cards.  It’s nice that you get to discard two cards rather than put them on top or on the bottom of your library.  This will fill up your graveyard for Delve spells you may want to cast later on.

Oath of Nissa – One-mana to be able to get a card to refill your hand is excellent.  It allows you to help mana fix for your next couple of turns or - if your mana is set you can get the first Planeswalker you would like to cast.

Oath of Gideon – Three-mana for two 1/1 Ally Creatures isn’t too bad and can be better if you have any Ally creatures that would benefit from them coming onto the battlefield.

Should I Play More Than One? 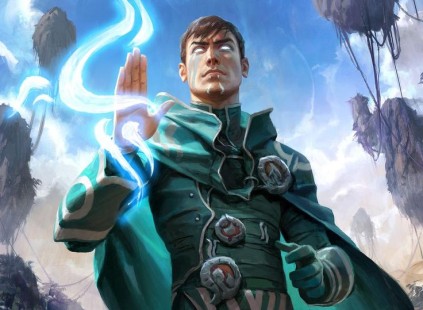 Oath of Chandra – I would sideboard more in if you are playing against an aggressive small creature deck, but otherwise one should do the trick.

Oath of Jace – Since this is a blue card, I would consider playing more than one. Not only does it help you cycle through your deck, but also the discarded Oath can help fuel your graveyard as a resource for your Delve spells.

Oath of Nissa – Being that this is a one-drop that replaces itself, I have no problem decks playing up to 4 of these.  It can help you find all the cards you need to take control of any game.

Oath of Gideon – Getting two 1/1 Ally creatures over and over again would only be beneficial if it works together with what your deck wants to do.  A certain new green Planeswalker wouldn’t mind adding +1/+1 counters to all those Ally creatures though.

Oath of Chandra – This card has an ability like that of Purphoros, God of the Forge except that most often you won’t be playing many Planeswalkers a turn.  Two damage is nice, but not enough of a bonus in my opinion.

Oath of Jace – Being able to Scry every turn can lead to some good card advantage, except it will usually take a few turns for this to become active. Most turns you will have zero to one Planeswalkers on the battlefield.

Oath of Nissa – This Oath makes an immediate impact when it comes onto the battlefield.  It allows you to cast any Planeswalker using any mana you have at your disposal.  Hey, you might even throw in Ob Nixilis Reignited, just to be crazy!

Gotta say that Oath of Nissa is definitely my favourite pick of the Oaths. It refills your hand, is a game changer as soon as it hits and only costs one mana! 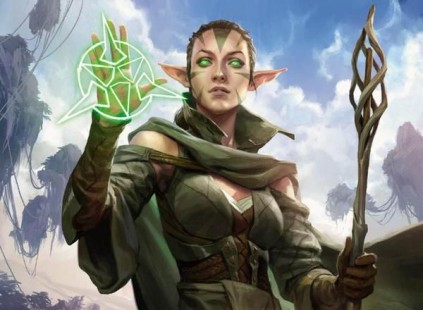 So which Oath if your favorite?  Let me know in the comments!  Thanks again for reading another edition of the Daily Dose of Oath of the Gatewatch and I look forward to seeing you all again tomorrow for some more previews!