Daily Dose of Shadows Over Innistrad – Transformers, Horrors in Disguise!

Welcome all to some more preview action on the Daily Dose from the next amazing set, Shadows Over Innistrad! In the original Innistrad block, a majority of the transforming creatures were Werewolves, who always transformed when either no spells were played (Human to Werewolf) or when a player played two spells in a turn (Werewolf to Human). This time around most of the transforming creatures are not Werewolves. Today I’m going to be looking at three of those creatures that transform in different ways in Innistrad.

First we are going to be looking at Human Cleric that gets a little bit stronger once its equipped.  Here is Avacynian Missionaries. 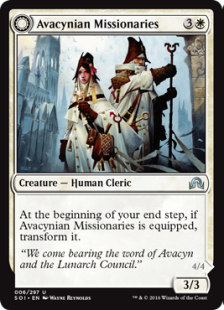 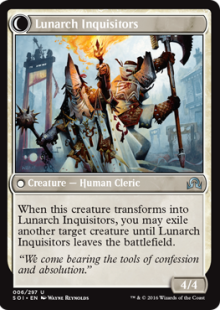 To start off it is a 3/3 for four mana, which is a pretty weak creature for its casting cost, but don’t worry it can transform!  Once it is equipped, it transforms into Lunarch Inquisitors and allows you to exile another target creature until Lunarch Inquisitors leaves the battlefield.  Although you aren’t able to transform during your opponent’s turn, this is still a threat if not dealt with.  Transforming into a 4/4 will make it harder to kill as well.

I can see this being used in a Red/White Equipment deck when Shadows Over Innistrad comes out.  If they keep printing more and more Equipment that it usable, than this deck could become a reality.

Next is card that’s power and toughness get worse when you transform it. Here is a look at Elusive Tormentor. 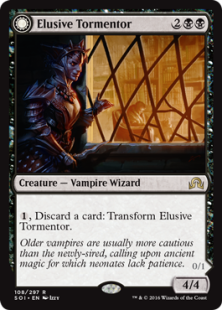 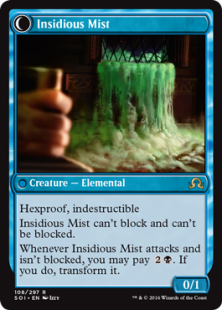 Elusive Tormentor is a 4/4 creature that transforms into an 0/1 Elemental.  Some might ask why you would want to spend one mana, discard a card to transform into an 0/1.  Well since the 0/1 form has hexproof and indestructible it will get around any removal that your opponent plays, whether it is a one-for-one removal or a board wipe. It also allows you to attack and dodge all non-instant removal and transform it back into a 4/4 to hit for four damage.  Yes, it is a very mana intensive card and you will be having to discard lots of cards, but this is a crazy design for a card, and one that could see play.  Despite it transforming into a blue creature, you don’t ever need any blue mana for it, so this can be played in a mono-black deck.

Elusive Tormentor is also the Buy-A-Box promo for this set, so make sure you go to your local gaming store and pre-order your box of Shadows Over Innistrad to get your copy! 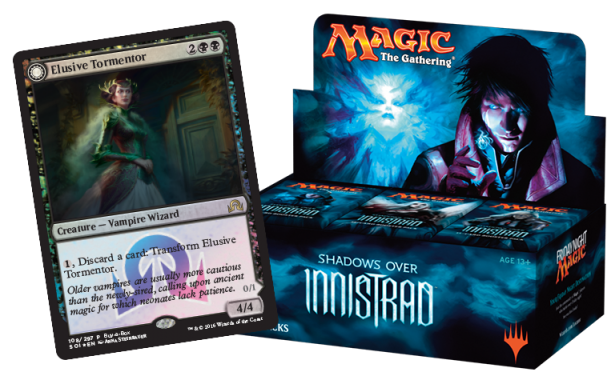 The last card we will be looking at is a card that is another well designed Magic card that we will be seeing in the near future.  Here is Thing in the Ice: 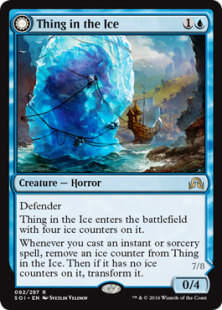 First of all, they named a card Thing in the Ice.  That is simply awesome. To start off you get a 0/4 Defender that will be able to block most early game ground creatures. If you are able to cast four instant or sorcery spells, it will than transform into Awoken Horror, a nasty 7/8 creature that will bounce pretty much all other creatures into their owner’s hands.  Being able to cast four spells should take a few turns, but shouldn’t be too difficult.  The great thing about it, is that you will be able to transform it whenever is most beneficial to you. Being able to do it in your opponent’s end step and than attacking for seven the next turn will turn games around quite quickly.  I also see no issue with playing multiple of this card as it will provide early defense and will never bounce each other when it transforms.

Thanks again for reading another fun edition of the Daily Dose of Shadows Over Innistrad!  There will be some exciting cards to preview this week, so I look forward to seeing them and bringing some insight into them for you.  See you tomorrow!