Welcome to deckbuilding week here on the Daily Dose of Shadows Over Innistrad! Today, I am looking at some Standard decks that will see some play when Shadows Over Innistrad comes out on April 8th. One of my favourite cards to build a deck around in the past couple of months has been Collected Company. Thanks to tons of new targets in Shadows Over Innistrad, this archetype will continue. The problem is what direction to take it. Let me present a few choices for you.

Two-colour decks are going to be a lot easier to play than 3-colour decks going forward with no fetch lands available. The mana base is a lot stronger with only two colours with an emphasis going towards white mana because of the six white one-drop creatures (Kytheon, Hero of Akros and Thraben Inspector).

The idea of this deck is to go wide with your strategy and get as many creatures on the board and pump them up with Thalia’s Lieutenant to be able to overpower the board. Getting extra creatures with Secure the Wastes will also allow you to both transform Hanweir Militia Captain and one of your finisher cards, Westvale Abbey. Since there are so many creatures in the deck through both spells and creatures, it shouldn’t be too difficult to have five creatures to sacrifice to bring out the 9/7 Flying, Haste, Indestructible, Lifelink Demon to crush your opponent. Sigarda, Heron’s Grace is another creature in the late game to finish off your opponent, while filling your board with Human tokens.

Taking a lot of cards from the Bant Company decks from the past, it welcomes some new Shadows Over Innistrad cards as well. The new rare lands of Port Town and Fortified Village will allow you to play a three-colour deck with a better mana base. Pious Evangel is brought in for a couple purposes. It will allow you, especially in multiples, to gain a lot of life. You will always have lots of creatures coming into play, so that extra life total will help. Secondly it is part of a three card infinite combo in the deck. 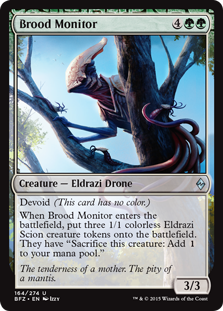 Don’t ignore the fact that Eldrazi Displacer works well with cards like Reflector Mage to add some extra bounce onto the battlefield as well.

So which deck would you choose?