Daily Dose of War of the Spark – Domri, Nissa and a Living Twister

Welcome all to the Daily Dose of War of the Spark, where today I’ll be talking about, as the title suggests, Domri, Nissa, and a Living Twister! I’m someone who has had a lot of experience playing all types of decks from Aggro, to Midrange, to Control decks. There was a time though where I played only creature heavy decks that were usually being highlighted by Red and Green Magic cards. Therefore, I’m very excited to look at a couple of new planeswalkers that could go into a new Gruul deck as well as a creature with what I think is the perfect amount of toughness for today’s Standard metagame.

First off, I want to talk about a new Gruul creature that not only has 5 toughness, but a few abilities to help you in the late game. Here is Living Twister. 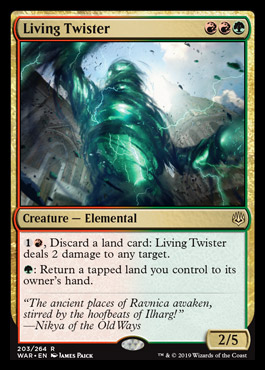 With a lot of creatures come in at 3 or 4 power (Growth-Chamber Guardian, Gruul Spellbreaker) and removal maxing out at 4 (Lava Coil), having 5 toughness is a great place to be in the format. This makes it a great creature to have early in the game to be able to block anything coming your way. Late in the game, thanks to its two abilities it acts as a three-mana way to chuck your existing lands you don’t need to start dealing 2 damage to any target you want. It also makes each draw a little bit better by allowing you to discard those late game bad land draws for 2 damage to the face. There is also the odd time where you might need more of a particular color of mana. You can tap a land for red mana for example, then return the land to your hand and play it again for additional red mana.

Now I can tell you about the return of the great Nissa. Here is Nissa, who Shakes the World. 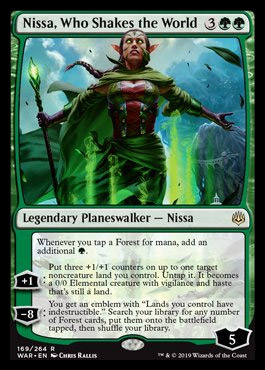 This isn’t your aggro planeswalker you have here, it is one that you plan to use for the execution of a long game plan. Let’s talk about the abilities of this planeswalker.

Whenever you tap a forest for mana, add an additional G. – This is a solid ability, and one that rewards you for playing a mono green deck. One might ask what you will need that much mana for late in the game of a mono green deck, perhaps an epic Kamahl’s Druidic Vow. You could always use that mana to cast without Convoke, a mighty Impervious Greatwurm.

[+1]: Put three +1/+1 counters on up to one target noncreature land you control. Untap it. It becomes a 0/0 elemental creature with vigilance and haste that's still a land. – They key to this ability is that you can’t pump up one land repeatedly with more +1/+1 counters. It does allow you though to create an army of 3/3 lands in hopes of overpowering your opponent. In a pinch, you can also use this ability as a mana source as it untaps the land that you are adding three +1/+1 counters to.

[-8]: You get an Emblem with "Lands you control have Indestructible". Search your library for any number of forest cards, put them into play tapped, then shuffle your library. – Once again, this ability is strong if you are playing a mono green deck with only Forests in the deck.

Finally, if Nissa was a bit too slow for your liking, here is a planeswalker built for speed. Here is Domri, Anarch of Bolas.

Creatures you control get +1/+0 – This is a very solid static ability that just makes all your creatures that much more powerful. A three-mana anthem is great, even if you don’t use any other ability on this planeswalker, but don’t worry you will.

[+1]: Add R or G. Creature spells you cast this turn can't be countered. – This ability acts as a Cavern of Souls for all your creature spells you cast for the rest of the turn. You don’t even need to use the mana it gives you, although I’m sure you will. This will be a great ability against control decks. It will also allow you to ramp from three to five mana for creatures like Skarrgan Hellkite.

If those 3 cards don’t whet your appetite for some Gruul action, I don’t know what will! Every day I talk about new cards and every day I’m thinking up more decks to run through the gauntlet. Thanks for joining me this week on the Daily Dose of War of the Spark. Join me again next week as I go into week three of previews and talk about some of the last cards revealed for the new set.