We all know that guy at our LGS who latches on to an obscure subtype or archetype and just barrels down. With Ixalan around the corner, don't expect those guys to go anywhere. Every tribe, no matter how obscure, gains something from so many of the new Ixalan cards, either in the form of new cards that actually belong to the archetype - such as Shamans, Druids, Clerics, and Scouts - or just by virtue of having access to new tribal support cards.

This week, I want to talk about a particular underrepresented tribe in Magic, and how you can use them to beat face and send a message to WoTC. I'm talking Horse Control in Standard.

A quick Gatherer search shows that in all of Magic: the Gathering history, a total of 24 horses have been printed. That's not nearly enough. Admittedly, it beats the grand total of eight Lhurgoyfs, or five Octopuses, and it's a heck of a lot better than the singleton Lamia (Seriously, why even create the tribe if it's just for one creature? #BringBackLamias #OctopusTribal #MaorGoyfs). Hashtags aside, 24 is not a lot of creatures when stacked up against the 1990 Humans, 624 Wizards, or 332 Elves.

Out of all 24 horses, there are a total of two that are Standard legal. Crested Sunmare and Nightmare.

Oh, you didn't know Nightmare was in Standard? Neither did many of the poor souls at my nearest LGS, who cried out in fear and confusion as a horse-wielding madman crushed them to death beneath Indestructible hooves. He went undefeated, and went home with a shiny Fatal Push promo.

Now, this doesn't mark the first time Crested Sunmare has trotted its way to victory in the last few weeks. A fellow by the name of ChanningTatters rode the horse lord to first place a few weeks ago on MTGO in an Orzhov aggro list - but his deck only had half the amount of horses, AND it didn't win a Fatal Push promo, so who cares? Let's take a look at Horse Control!

Saddle up this beauty and trot your way to victory, leaving your opponents foaling the burn. God, I love horse puns. Is that the last of them? NEIGH!

Truth be told, this deck doesn't play a whole lot differently than your average control deck in Standard; Well-timed removal and disruption spells keep your opponents on the defensive while a plethora of draw spells keep your hand happy and stocked up with more removal and disruption spells. Once your Planeswalkers hit the field, they continue to disrupt the opponent's field heavily.

Dovin Baan helps stall out attackers and turns off pesky activated abilities with his +1 ability, and draws more cards with his -1. As an added bonus, having a Crested Sunmare on the field at the same time turns his -1 ability into: 'Gain 2 life, draw a card, create a 5/5 Indestructible Horse token'. You can do that three times in a row without using his +1 ability if you really want, but remember that if you can get that Emblem going - which isn't terribly difficult to do in a control shell - you've pretty much got the game in the bag.

Sorin, Grim Nemesis is one of my personal favourite 'walkers. His +1 gives you cards and threatens to close out a game. If you haven't used his +1 ability and revealed a card with six or more Converted Mana Cost, you haven't fully lived. His -X ability is tremendously helpful at getting rid of enemy Planeswalkers. His ultimate ability, while powerful, is just not something I recommend doing in a Standard format that has Fumigate.

Nicol Bolas, God-Pharaoh gets his own paragraph because I don't feel like meeting my own inter-planar defeat. All hail the God-Pharaoh! Resolving this draconic deity/king is often a game-ender, and even if your opponent manages to take him out, he's likely already generated some serious card advantage or caused some massive disruption with any of the three abilities he's able to activate when he hits the battlefield.

Creature-wise, let's cut to the chase - Eight horses. Eight of them! Four Nightmares and four of the ePONYmous Crested Sunmare. Gisela, the Broken Blade pulls double duty as removal bait and a source of life gain to trigger the Sunmare into trotting out a 5/5 Horse token. The Scarab God is quickly becoming a control staple, as his activated ability (which for some gods-awful reason is Instant speed) paired with enough removal basically guarantees that you'll be able to keep your field full of threats. Unfortunately, there are no hilarious interactions with Nightmare, which is fine because you shouldn't expect to see them bigger than a 4/4 or 5/5 un-Eternalized. But hey, a 4/4 Flying Horse for four Mana isn't bad - and a 4/4 Flying Horse with Indestructible is even better! A token version of Crested Sunmare still generates 5/5s, so having the God of Scarabs in your list effectively makes it so you're running eight copies of the magnificently mighty mare.

The removal spells in the list are about what you'd expect for a control shell; Grasp of Darkness, Fatal Push, and Murder are super good at killing things - but if your meta is God-heavy or Planeswalkers-laden, you might want to consider running Anguished Unmaking over Murder. The inherent ability this deck has to gain life really offsets the cost of playing it, and let's be honest - we've only got a few good weeks left to use this beauty of a catch-all removal spell before it rotates out.

Blessed Alliance, a card that has quickly become one of my favorite modal spells of all time, absolutely shines here. Expect to be Escalating it to use at least two of its three modes most of the time, or to be able to absolutely blow out an attack by hitting all three modes and untapping some beefy blockers. Renewed Faith is another card that really punches above its weight in this deck. If you have a Sunmare on the field, you should almost always be Cycling it - unless you really, really need the four extra life. Paying two mana to draw a card, gain two life, and get a 5/5 Indestructible Horse is an efficiency you just touch. Think of it as having three copies Dovin Baan's -1 ability in your deck.

In the blue corner, we have the proven effective trio of card drawing spells Pull from Tomorrow, Glimmer of Genius, and Hieroglyphic Illumination. Add in a pair of Negates for Disruption, and you've got yourself a blue shell, my friend.

Playing the deck is pretty straight forward: Use removal spells to keep your opponent's field clear, get the Sunmare onto the field ASAP, and proceed to stampede your way to victory with an army of 5/5's. That's pretty much it! The Scarab God is an excellent alternate way to win the game, using his aforementioned ability to reanimate your opponent's threats and make them into your threats. Resolving either a Dovin Baan or Nicol Bolas, God-Pharaoh ultimate will also most likely win you a game.

The sideboard for this deck covers almost as many bases as the mainboard does; Gideon, Ally of Zendikar and Ob Nixilis Reignited have had more than enough written about their awesomeness for me to need to expound on them here. Additional copies of Negate and Painful Truths help you stay on top in a control matchup, while the remaining two Blessed Alliance ensure that Ramunap Red is made as un-threatening as possible. Finally, the complete 'Angel Package' in the form of Bruna, the Fading Light alongside an extra pair of Gisela, the Broken Blade gives you access to the monstrous Brisela, Voice of Nightmares as a win condition that a lot of decks just simply can't deal with.

Moving forward into Ixalan, this deck doesn't actually lose much - Sorin, Grim Nemesis, Blessed Alliance, Grasp of Darkness, Painful Truths, and Gisela, the Broken Blade all rotate out, but we have some decent replacement spell options. In the Mana base, Smoldering Marsh, Sunken Hollow, and Prairie Stream all rotate, but have some fairly obvious replacements in the form of Canyon Slough, Fetid Pools, and Irrigated Farmland - And let's not forget the possibility of using Dragonskull Summit, Drowned Catacomb and Glacial Fortress for the first time since M13! 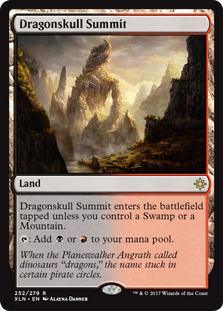 The sideboard loses the above mention cards, plus Gideon, Ally of Zendikar, Ob Nixilis Reignited and Bruna, the Fading Light, but as I said before, they can be replaced. Slot-wise, at least. Nothing will ever replace Ob Nixilis Reignited in my heart. I'll miss you, Obie Nix. We had some good times...

With rotation hanging over us all like a deadly pendulum, let's all take the time to use some bad brews to say farewell to some beloved cards. If you're looking for something to try out, load up Crested Control and trot your way to victory at your LGS!