The past couple of weeks we’ve been looking at competitive brews, but this week we're going to a staple of the format: Mono-Red aggro.

This deck has been around for a while now, and it’s been winning tournaments every step of the way. To build the best Red deck possible, we need to look at how this archetype has evolved throughout the past year or so.

Red made its first major appearance during Hour of Devastation Standard as a quick deck that took advantage of the various clunky decks that existed due to the bannings. It was as fast as possible, with the staying power of Ramunap Ruins and Hazoret the Fervent. At first it looked as though this deck would die off as the format became more defined and tuned, however that never happened, mainly due to the dominance of Temur Energy.

Mono Red was great at preying on decks designed to beat Temur, so it stuck around. But as Energy decks grew bigger and bigger, we started to see cards like Harsh Mentor and Rampaging Ferocidon appear in the mainboard. Some decks even branded themselves as Red Deck Wins or Big Red. Mono Red became an aggressive Midrange deck, and grew further from an all in Aggro deck. Most recently the bannings of the Ferocidon and Ramunap Ruins have left Red players looking for other colours to splash, in order to maintain that same aggressive Midrange feel that they had during Ixalan. The most common of these being White for Path of Mettle, but Jeskai and RG varients are also popular.

Moving to the present, the format is filled with Midrange strategies: a lot of which feel and play like they are imitating Mono Red and Temur decks of last Standard. This is why I think we should play the fastest version of Mono red we can, just like when the deck first emerged. It can once again prey on decks that aren’t ready for it, but this time because our opponents are trying to be something they’re not.

The next thing to acknowledge when building this deck are the staples.  You simply cannot build a Red Aggro deck without these cards. 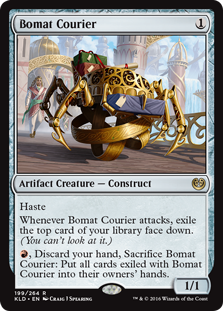 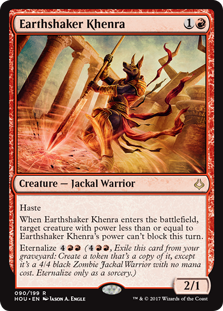 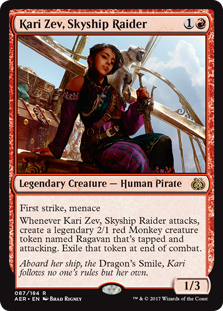 Once these cards are in you end up with about twenty slots to play with. As our second one-drop I have opted for four copies of Fanatical Firebrand. The main reason that it's here over Soul-Scar Mage is simple: It has haste. Besides, the Fanatic is far more versatile than it first seems. It can often just remove a blocker or be a burn spell for one damage. In fact, it’s hard to find a situation where we don’t want this card.

We use another few of our free spots on Dire Fleet Daredevil. At worst this is a two mana 2/1 with first strike. That might not sound like much, but it passes the vanilla test. Importantly the first strike prevents it trading with one mana plays like Kumena’s Speaker and Skymarcher Aspirant. The best this card can be though is almost a Snapcaster Mage. Hitting a removal spell with its ability is just about as good as it gets, and it’s not unusual. It is perfect for taking advantage of the removal heavy midrange decks that are so popular right now.

At three mana we have an old favourite of Red Aggro: Ahn-Crop Crasher. Once again it has haste and is hard to block, and those two things are exactly what our deck is looking for. The Crasher was one of the cards that held the original Ramunap Red Decks together, and since we're on pretty much the same game plan, it's a natural fit.

Which leaves us with our Non-Creature spells. Since we no longer have access to Ramunap Ruins, we need a way to grind out the last few damage. This is where the four copies of both Shock and Lightning Strike come in, both of which can remove early blockers and hit for damage against control decks. We can rely on hitting at least five points of non-combat damage in a game, which increases our win percentage by a huge amount.

The final two slots in the deck are pretty open, so I decided to go for a little spice with Insult // Injury. This might not seem like much, but it’s the best card there is for an out of nowhere finish as far as my testing has shown. I've won countless games by top decking one of these, and it's just more burn for us once it hits the graveyard. However once our opponent has seen it, it's time to sideboard it out. It’s a great card to have someone play around when really we have a Pia Nalaar

I’m not going to give a sideboard guide in the same card for card manner as usual this week because there are several ways to play each match up, all of which are equally valid. You should tune you sideboard to how you want it to be. For example Harsh Mentor is not a card I included, but there are certainly reasons that it should be there. However, I do have two pieces of advice:

Anyways, thank you for reading. As usual don’t hesitate to send me a message with any questions you may have via my Facebook, and I’ll see you guys next week.