Today we have our first deck tech of Dominaria Standard, and boy is it a fun one: Cheating Mana Costs. 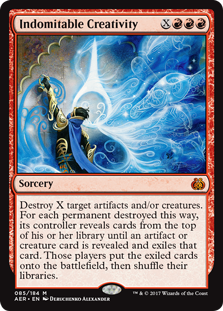 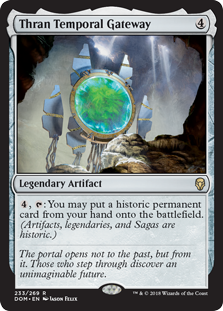 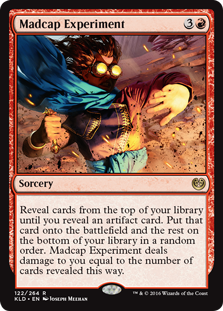 The deck is based around using these three cards to drop some serious threats way earlier than they should hit the board. It's a similar idea to the old Aetherworks Marvel decks, and we all know how good they were.

In order to use this effectively we need to have early creatures… but not play any disappointing hits for our mana-cheaters. What better way do that than token producers? Legion's Landing, Servo Exhibition, and Saproling Migration fulfil that role wonderfully. Each them is quick enough to pose a problem to Aggro decks and of course they set up our "Combo". Plus, something that I found during testing is that this go wide suite is enough to take down a control deck on its own, giving us an alternative game plan in our worst match up.

Next let's take a look at the reasons to try and get this whole wacky machine working. Firstly, Thran Temporal Gateway can deploy everything in the deck. No need to worry about that. Our other Artifact hits for Madcap Experiment are Cataclysmic Gearhulk and Noxious Gearhulk. Both of these act as removal, then leave themselves behind as a body.

Since the changing of the Planeswalker Uniqueness rule to the Legend rule, Planeswalkers have become legendary. This helps us a ton as we can deploy both Nicol Bolas, God-Pharaoh and Ajani Unyielding using our Gateway. Once again, both of these are removal when they enter. Ajani draws us towards more Historic Cards whilst Bolas exiles our opponent's hand before playing their deck for them. What's not to love?

Finally, we have our Legendary Creatures. Etali, Primal Storm allows us to continue to cheat our mana costs. Darigaaz Reincarnated is a hasty threat that can end a game quickly, and plays similarly to an oversized Rekindling Phoenix. And last but not least we have our best hit in the deck, Demonlord Belzenlok. Not only do we get a 6/6 flyer, but we also get to draw three to four cards in a typical game, which at the cost of a few life is fantastic.

So here is Indomitable Gateway:

Our Sideboard is largely tuned to beat control, since pretty much every other matchup is good to great.

Essentially, we want to bring in Nezahal, Primal Tide because of how hard he is to answer. The exact same can be said about Carnage Tyrant and Rekindling Phoenix. Chandra, Torch of Defiance is a never ending source of card advantage, while Sweltering Suns improves the Aggro match up just a little more, and Abrade is a good all round card that happens to be fantastic against GPG and Vehicles decks.

If you are thinking of constructing a Sideboard for yourself, try to play as many Naya coloured cards as possible. You don't want to be caught out by some anti-combo Sideboard plan and be left with a bunch of unplayable cards.

Finally, this deck is for real. It might seem like a joke but cheating mana costs is one of the most powerful thing you can do in Magic. It's why Delve cards and Aetherworks Marvel have been banned in various formats. But don't worry, it's also not super serious. This is one of the most fun decks I've played in recent memory.

This week I want to talk about a match I played recently. I was playing a Win and In for a Frontier League. I was on Esper Control and my opponent on Grixis Control.

Normally, I find control mirrors grindy and somewhat boring but this match was so fun. We were both playing the match of our lives and it came down to such small margins. After two hours I had pulled out a 2-1 victory. But I've not decided to talk about this just to say how great I played (that's just part of the reason!), I actually brought it up to highlight how important land value can be.

I won that match thanks to Field of Ruin dealing with opposing Azcanta, the Sunken Ruin and Shambling Vent hitting for about 16 damage throughout the match. There is no doubt in my mind that I would have lost 2-0 if it weren’t for these cards. If you have space in your deck, don't underestimate the power of utility lands, no matter what the format. It's just extra value your opponent doesn't get.

Thank you guys for reading and I hope you enjoyed the deck. As usual don’t forget to share this with your friends or maybe even your LGS. If you want to see more content like this and get updates on all things standard be sure to check me out on Facebook and Twitter. I’ll see you guys next week.