Hey guys. Today, I’m going to be talking about a satyr tribal deck and a zombie tribal deck that barely have enough type matters cards to be considered tribal. WARNING: If you came here looking for Tier 1 decks, this is the wrong place.

Red Green Satyrs a.k.a. We Can Dance if We Want To 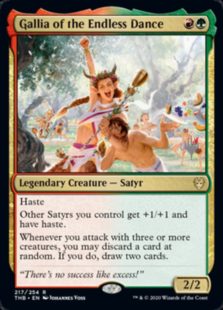 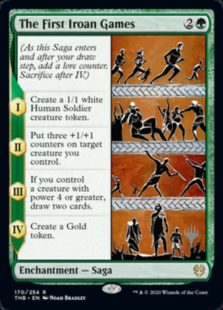 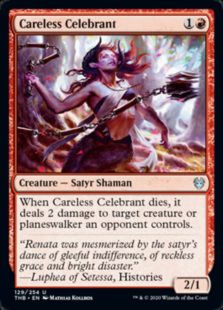 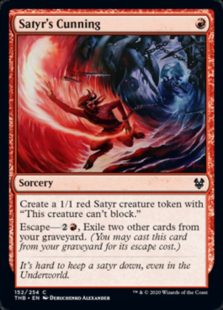 This is more of a Red Green Monsters deck with a Satyrs sub-theme.

Gallia of the Endless Dance is an interesting card. It is a great lord with no support. Luckily a 2/2 haste for 2 is okay on its own at it gets pushed more into the good range when you add on that it draws cards, even without any other Satyrs. It gets slightly better once you throw in the only good Satyrs since it now pumps a few of the cards in your deck. Anax, Hardened in the Forge is ideally going to be a huge creature that also gives you a bunch of tokens over the course of the game. It is a great Embercleave target and can also punch your opponent out of nowhere when given haste by Gallia. Making two tokens every time something dies (assuming you have enough devotion for Anax to have 4 power) is also really good once those tokens get pumped by Gallia.

Klothys, God of Destiny doesn’t produce as much value as I might like but a 4/5 indestructible for 3 is pretty good, especially when it comes with a half-decent upside. The First Iroan Games is a decent build-your-own 4/4 with a Divination attached for extra value. Both effects are about what you expect for 3 mana, but when you add them both together it’s worth way more. The one disadvantage is that you don’t get all the effects right away (“But I’m hungry now”) meaning that your opponent has a chance to react to the swing in value. The rest of the deck is just Red Green Monsters stuff with some extra Satyrs.

Although this might not be as much of a lean mean killing machine as normal Red Green Monsters, it has a lot of new cards underloved cards that you might not get to play otherwise. It also has the advantage of attacking from a different angle, and just being a huge meme. 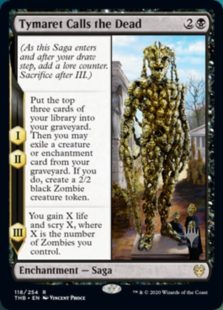 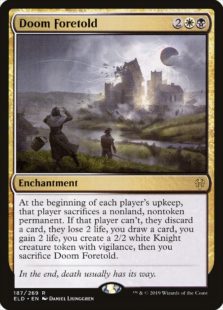 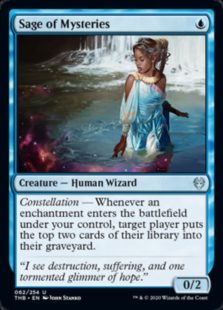 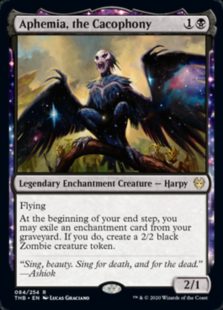 This deck is pretty complicated. It’s a mix of a graveyard based enchantment zombie deck, and a traditional Doom Foretold deck, with some constellation cards thrown in.

Let’s start with the zombie part of it: Tymaret Calls the Dead is a bad History of Benalia if you’re playing enough enchantments and creatures that you can rely on milling an enchantment, which you can in this deck. Aphemia, the Cacophony is better at making zombies than Call the Dead is, it can make them sooner and for longer. The problem is that the deck needs something to put the enchantments in the graveyard. This is why Sage of Mysteries is in the deck.

Now the Doom half of it: Doom Foretold can be a huge value engine. It just needs enough things you can sacrifice to it to. The Doom deck used to do this by playing cards like Golden Egg and Guild Globe. This deck instead plays a bunch of new value-generating enchantments. The most interesting of them is Treacherous Blessing. It gives you the most value, but it can be extremely dangerous to play it without Doom Foretold to sacrifice it to.

One last card: Protean Thaumaturge is a great under-costed clone. Having your opponent’s best creature for half the cost they paid can be pretty good.

I didn’t put Dance of the Manse in this deck because if you’re doing well in a game there’s a good chance that all your good enchantments will be too exiled to be brought back.

Thanks for reading. What decks have you built? Let me know in the comments!