How many decks do you have brewed up and ready to go right now? If you're like me, you're borderline addicted to brewing up new decks. How about an article to enable that addiction?

For our podcast, Commander's Brew, we brew up a new deck each episode. When we first started, we decided to take a budget angle because we knew we wouldn't be able to resist turning some (lots?) of them into real paper versions. I'd say I've got about a dozen Commander decks on my shelf right now, and they rotate in and out of my "top playables."

So what's behind it all? Do I, and others like me, just like brewing up decks? Do we want to complete the goal of having one deck of each colour combination? That one doesn't apply to me specifically, since I already have two Mardu decks. No, for me it comes down to always wanting my decks to "do something new".

Now that we've identified the psychological reasoning behind it, we can enable our cardboard addiction by feeling it with more ideas!

We can start broadly. Decks that attack with big fatties. Gruul seems great for that. Lots of giant monsters to choose from with abilities like Trample and powers and toughness-es that scale with our lands. Awesome! 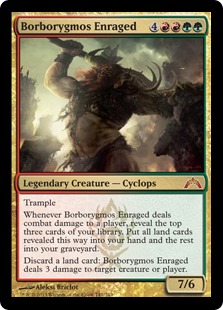 After a few games, it starts to seem familiar. We've done that. Now let's change our hypothetical commander to Borborygmos Enraged and start flinging lands around as Lightning Bolts! Let's go all in on it too. It's a whole deck now! But once we've Praetor's Counsel'd back a yard full of lands and killed an opponent out of nowhere, we've done it. The deck loses a bit of luster. Time to move on! 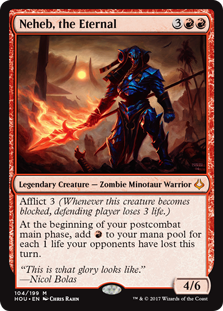 This is how I look at new commanders when a new set is released. For example, this is why I was so excited by Neheb, the Eternal. Granted I'm biased towards X spells, but Neheb made it finally viable to fling around 40+ point fireballs at my opponents's faces! That's a new one for me!

The deck lists from the newest Commander sets are out. C17. And with it, we've got some new commanders. I'll go through a few of them and share my thoughts on what I might want to do with them!

Mirri, Weatherlight Duelist seems good! I don't think I've ever brewed up a Green/White Beat Down deck. Surely the precon will do a good job, but if I were to start over, I'd drop the cat theme and go for some of my favourite combatants in those colours! Off the top of my head, Karametra to help us get to Emeria Shepherd and Giant Adephage. Let's make sure that Mirri has some unblock ability for herself too, and we're good to go!

Licia, Sanguine Tribune is an interesting one. We're obviously going to want some lifegain in there. I'm not sure I've ever brewed a Mardu deck that wants to gain life and reap the benefits. I know white's great for that, but if we look into black and red as well we get some interesting options! Searing Meditation seems like a nice way to keep tabs on troublesome support creatures. Brightflame could be a decent one-sided board wipe. We should probably throw in Cliffhaven Vampire as a bit more inevitability for all of our lifegain. Licia also eventually becomes a must-deal with creature or we'll get her big enough for a one-hit Commander kill.

I'm VERY intrigued by Mairsil, the Pretender. This is a fun area I've never brewed around before. A ton of decks focus on entering the battlefield, but I don't know of many that focus on activated abilities. They're far less exploitable, but this is a step in the right direction! My first search would be for ones that don't require a tap. Regeneration seems really useful. Augur of Skulls gets itself to the graveyard easily enough, and gives us one cageable option. Plus, if we end up putting batches of cards in the graveyard, I'd love to cage Chainer, Dementia Master as well. I suspect the community will discover some dirty combinations soon. Can't wait!

I'll close off with a Legendary from the Dragons deck, O-Kagachi, Vengeful Kami. I'll be honest, I've never brewed a five-colour deck before. I like a bit of a restriction, and having access to every card ever made is a bit open. However, its ability really deters players from attacking you. I'd be inclined to make sure I have plenty of haste so my opponents have no window to attack, even if it's in the Command Zone. Maybe a Fumiko the Lowblood to inspire attacking, so we just have to clean up the mess when my opponents eliminate each other. Now that I've thought about it, this might be the next deck I put together for my personal use!

Which new Commanders are you excited to brew around, and which angle do you think you might take? Let's chat about it in the comments below!