Let's Brew around some silver-bordered Legendaries!

Unstable has arrived, and has brought with it a whole new set of commanders for us to play with! Ones that are even officially Commander legal until January 15th. So let's brainstorm some ideas for them. And let's add that, for most of us, Commander is a casual format that we don't need a rules committee to govern. If your group wants to play silver bordered cards forevermore, more power to you!

My first observation about the new legendaries is that they're almost all within Grixis colours. Sorry to disappoint all you Green and White mages.

When the spoilers were coming out, and we only knew about the factions' personalities, I decided I was all about the Agents of S.N.E.A.K. For those of you wondering what it stands for... who knows? It shows up in at least five different flavour texts, each one different. Even these awful spies can't agree on something! 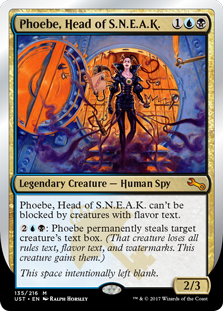 So, let's start with the head of these bumbling spies, Phoebe, Head of S.N.E.A.K. She certainly has an interesting ability. If it weren't for the flavour text portion, it seems like it could be from a real card. Heck, it's not that far from Mairsil, the Pretender. The interesting twist with Phoebe is that she steals the text. All of it. You don't get to have it anymore. Phoebe does.

Phoebe becomes a bit of a "text box" Voltron. She won't get bigger too easily, so we ought to approach this more like a Mairsil brew, which is well established by now. I'm unfortunately uninspired to brew around her. It's certainly useful to be able to take away your opponents' Commander's abilities, flavour text and all, but beyond that I think I'd rather just run Mairsil. 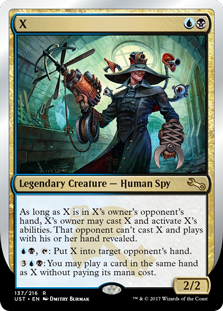 The Dimir guild, or Agents of S.N.E.A.K. as it were, get one more legendary in "X". Good luck searching up that one on Google. On a plus though, I've certainly learned a lot about the roman numeral for ten!

X is a Commander that will likely make you quite a few enemies. I imagine it feels pretty bad when your opponent jams X into your hand and systematically drains it of your best cards. I suspect the rest of the table will go after the X player, and quickly make them into an ex-player. 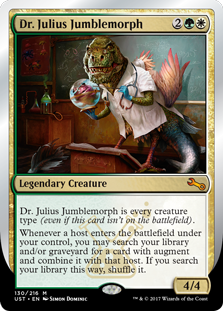 The only Commander without Blue, Black or Red in its identity is Dr. Julius Jumblemorph. Dr. J is all about Hosts and Augment creatures. Fortunately, Green and White have the most hosts/augments available. I think they're pretty fair overall, which is not where we aim to hit in Commander. That said, it seems like there's some fun abilities to exploit. We've got access to untapping permanents, blinking creatures, and pumping up your whole team +1/+1 at a time.

The keyword there is "seems". The augment creatures add different triggered abilities to pair with the host creatures speciality. Unfortunately, they're all very fair and difficult to exploit. The exception would be the Half-Squirrel, Half- Pony. Even then, it's been pre-errata-ed to make it way less fun. I think this is another miss for me.

Now, let's get into a few of the Rakdos Commanders. A.k.a., almost all of the other ones. 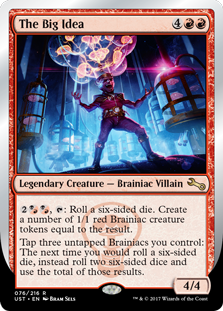 The Big Idea seems interesting. They seem like a cousin of a Krenko, Mob Boss deck, spamming out more and more Braniacs, only now we get access to Black. Which is really for Conspiracy so we can make everything a Brainiac. Then roll tons of dice.

I'm inclined to include lots of the other new dice-rolling mechanics here too. I do love dice! We've also got access to a couple cards that add to our die rolls to make sure we can spam out Braniacs in short order. You bet this deck runs Krark's Other Thumb. 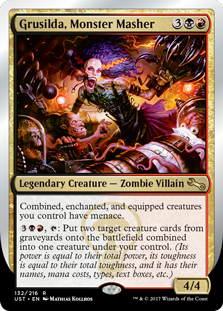 I'm tackling these new legendaries in order of inspiration, and now we're getting to the point where I actually want to brew these up and play with them.

Grusilda, Monster Masher is yet another Rakdos commander with a fun new ability. She's a reanimator at heart, with only the drawback of needing to target two creatures at once holding her back. It's a tiny drawback though, because we could certainly "combine" some really interesting new monstrosities. And to top it off, they'll have menace thanks to Grusilda's presence.

My current dream combination would be a Marionette Master combined with a Myr Battlesphere. I'd go with the servos to end up with a 5/10 creature with seven token artifact creatuers. If we have a way to sac those seven, that's 35 damage to spread around. Not bad! 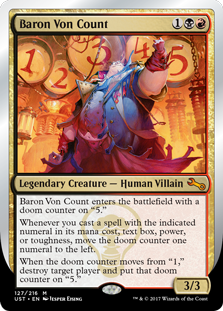 And saving the best for last, or at least the most exciting, Baron Von Count!

The text "destroy target player" just screams to be brewed around. We're looking for specific numerals on cards, and it's in our best interest to play lots of cheap instants that cover a few numbers at once. The toughest will surely be the five, but those last couple of digits ought to go by in a card or two. We can only tick the doom counter down by one per spell cast, but we'll want our cards to count for as many numbers as possible. Butcher's Glee might make the cut as a card that can save the Baron as well as count for two numbers.

I'm always excited to get my hands on some new legendaries and brew up some decks. Post in the comments below if you have any fun ideas for these commander's you're excited to brew around!