Going for the Gold: The Importance of Flexibility

Today we'll be discussing the importance of a card's flexibility.

Now, when I talk about flexibility, I refer to a card's ability to change so as to adapt to different circumstances. A Magic card that you can use in numerous situations is far more valuable than a card that you can only be use in one.

Let's start with the basics! In order to judge a card's flexibility, you need to weigh the following options:

1) How early can you cast the card?

The earlier you can cast a card, the more powerful it gets, as long as it has a worthwhile effect. Not only is this because you can start using it earlier, but you can also cast it along with another spell in the same turn.

Creatures and Planeswalkers are better off earlier in the game since they accrue value for their time on the battlefield, while spells that interact with your opponent such as Counterspell or Terror are great on turn two as well as turn 100.

However, Wizards has since moved away from giving us spells with this type of flexibility.

2) Does the card have an extra ability?

What is the full textbook of the card? Does it let you do more than just one thing? If so, this means it can be more valuable in tighter spots.

Typically you have to pay more for cards with increased flexibility, such as on split cards. Every so often however, we get a new mechanic which will allow an existing type of card to become more powerful.

One example is Shatter becoming Ancient Grudge. The mere addition of Flashback means that you can have two Shatters in your deck, but because it can be played from the graveyard, it is now a solid option in a deck that puts cards from its library into the graveyard such as Dredge.

Another example is taking Force Spike and adding Cycle so that it becomes Censor. While Censor is great in the opening few turns, after it has outlived its usefulness its controller can pay a blue mana to replace it for another card.

Always be on the lookout for cards that have additional abilities because this usually increases its flexibility.

3) Can you recur the card/ability?

Some cards have the ability to return to your hand if you pay a cost or meet a certain set of conditions. This not only increases the card's power level, but also its flexibility.

For example, Repeating Barrage can be used to take down a six toughness creature in Ixalan limited if you have 11 mana (six of which are red) and a creature to attack with.

Many winning constructed decks have been built on the foundation of being able to recur a card or ability.  Another example of this is Icy Manipulator, which is a repeatable Twiddle. This is what makes mana sinks very important in Limited since you have something to do with your excess land.

4) What type of deck are you playing?

If you are playing an early game deck, then you want cards that can end the game as soon as possible. Cards like Cut // Ribbons remove creatures in the early game, but can also be used as a mana sink in the late game that will burn your opponent out.

Okay with all of that out of the way, let's get into some exercises to determine which card is more flexible:

Situation 1: Which of these do you think is more flexible in the context of a GW Aggro deck in Draft? 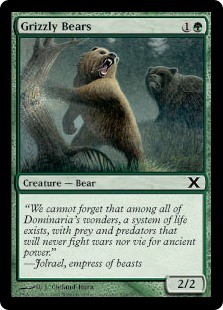 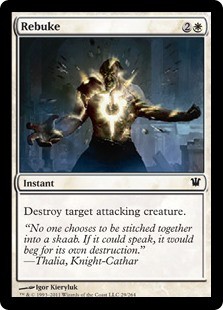 Grizzly Bears are very flexible because they can be cast on any turn beyond the first. In addition, you can use them to both attack and/or block.

On the flip side, Rebuke can only be used on the defensive. That is not to say that it's a bad card since it is a very powerful removal spell. However, if you're playing a deck that is heavily focused on attacking, then this card will only come in handy when you are losing.

I would say that given the context of this deck, Grizzly Bears is more flexible.

Situation 2: Which of these do you think is more flexible in the context of a BR midrange deck in Draft? 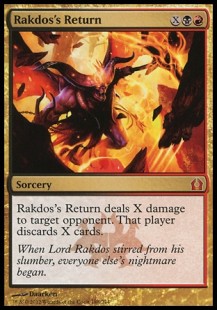 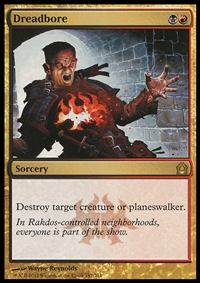 Rakdos's Return is a fantastic and very powerful card. However, we are discussing card flexibility here. While this card is INSANE in the early game, it becomes nothing more than a Fireball to the face in the late game once your opponent has no cards left.

On the other hand, Dreadbore is a great removal spell. It isn't a bomb, but it will answer any threat easily. This makes sure that this card is never a dead draw (unless you are playing against Mill). You can cast it on turn two or on the last turn of the game and still get the same effect.

Given the context, I would say Dreadbore is more flexible, albeit not as powerful as Rakdos's Return.

Situation 3: Which of these do you think is more flexible in the context of a Black deck in Draft? 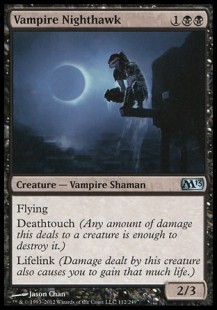 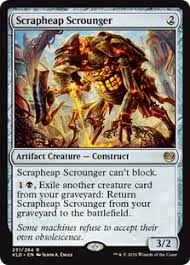 Vampire Nighthawk used to be a Limited bomb, and for good reason. It has evasion, and comes down as early as turn three. If that wasn't enough, it kills everything that it deals damage to, and has lifelink. This means you can use it to neutralize any creature threat (with the exception of indestructibility), or you can use it to race.

Scrapheap Scrounger is a powerful card, and has made waves in Standard due to its ability to recur. However, as anyone who has played Mardu Vehicles can attest to, this card is great when you are winning but terrible when you're losing and need something to defend yourself with. The "cannot block" clause removes so much flexibility from this card.

Since this a Draft, I would say Vampire Nighthawk is more flexible, despite not being able to recur like Scrapheap Scrounger.

How did you do? Did you agree or disagree with any of my choices above?

Let me know if you liked this article by posting in the comments below, or tweeting at me (@SammyTMTG). If you want to keep up with my articles and happenings, please make sure you hit the follow button for Twitter @ SammyTMTG. I’ll see you next week for another article on improving your magical skills! Until then, have a great weekend!