Welcome folks, to Robert McFoilpants's Commander emporium, today I'm going to tell you why you need a gloriously horrifying frog monster in your life.

The Gitrog Monster? More like the Git Gud Toad. Every EDH player wants to git gud right? Nobody wants to be a filthy casual, well this fantastic piece of 6/6 Deathtouching action is exactly what you need in your life.

And the best part is, he's approved by Dr. Git Gud himself, Albert Einstein!! 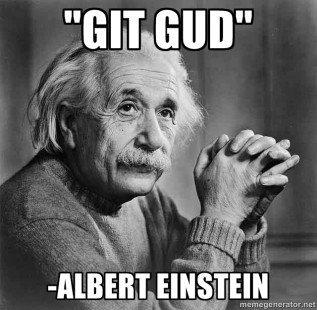 Gitrog, Home of the Value Toad

The stuff that this guy can do is amazing, he can do anything, he draws cards, he kills fatties that think they can soak up his frog punches, he'll fix all of your problems!!!* 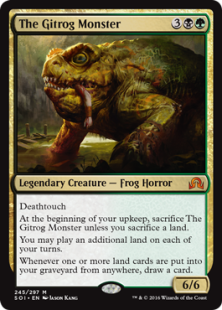 *Disclaimer: The Gitrog Monster is in fact just a Magic Card and will likely not solve any of your problems that don't pertain to this game.

Now sit back, and listen to my sales pitch. Let me tell you why you need a Git Gud Toad in your life.  For the small investment of only six mana this monster can do all of this and more! 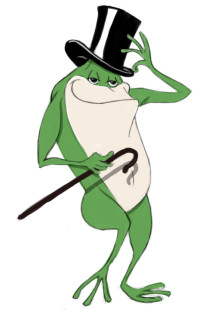 Sold! Now How Do I Use this Magnificent Beast?

First off, this thing is a frog horror, ain't no wimpy beast summoned by our casual pal Garruk Wildspeaker, this is a real wizard's creature. It's gonna eat your lands, eat your hands, and probably eat your friends if you have any left.

What you want to do, of course, is literally throw your lands at your graveyard like money at your computer screen. Squandered Resources, Putrid Imp, and all sorts of other accessories are going to draw you so many cards that even Azami, Lady of Scrolls players are going to be gawking in jealousy,

Casting Strands of Night is so unfair that it's practically going to a trophy shop and buying a game win.

This deck is capable of the craziest plays imaginable. Of course, with some assembly required.

Some Assembly Required? But I Wanna Git Gud NOW!

Relax, we all do, and this fantastic amphibian is going to carry you there, but you gotta know how to drive it first. Let's go over some of the more crazy combos in the deck.

Readers who have read my Omnath, Locus of Rage article can tell you just how fantastic Perilous Forays is, and my goodness does it destroy the board. Let's go over something stupid.

Have Perilous Forays,Lotus Cobra, Bloodghast and Blood Artist out.

Sacrifice the Bloodghast, get a land, add a mana from the cool mana snake, and Blood Artist slaps your opponent. After all of that, the Bloodghast COMES RIGHT BACK. So go ahead, drop every land in your deck, do what you want with it, you just flooded the board and lost absolutely nothing. And it can only get better from there.

Let's say we have Titania, Protector of Argoth and Squandered Resources in play. Let's go ahead, sacrifice all of those lands, and make a bunch of crazy elementals. Blood Artist keeps on slapping people, and someone is probably dead and miserable right now.

But what's that? Somebody is still foolishly clinging to life? Well, we still have mana from Squandered Resources right? Maybe their sunny skies could use a Death Cloud!

Oh dear, there's an Oloro, Ageless Ascetic player laughing his head off while still sitting at 20 life, he has no permanents left, but refuses to concede. Maybe we remind them that we had a Mazirek, Kraul Death Priest out, and that all of these elementals are like 30/28. And suddenly we have won this game of Elder Durdle Highlander.

I mean, you could always just keep sacrificing  Lord of Extinction to Jarad, Golgari Lich Lord with Strands of Night in play, but that's so much less exciting.

Other, less immediately winning, interactions include:

Using Abundance and Wild Mongrel to draw every land out of your deck is your frog buddy is on the battlefield.

Using Ambush Commander and Skullclamp to draw three cards for one mana.

Using Crucible of Worlds, Strip Mine and your plentiful extra land effects to be an all around terrible person while drawing way too many cards.

Please, I Need This Amazing Decklist

Hold on to your trousers, because this isn't your dad's boring Zur the Enchanter EDH deck, this is the finest form of value, you'll be making so much free value that people will think you're a bank robber.

The Gitrog Monster (a name I shall never actually call it by again) may be the greatest Legendary Frog Horror every printed in Magic, perhaps even greater than Mistform Ultimus. You can expect to see me slinging this deck someday soon. But I'm not going to play magic with it, as I'm pretty sure I can be arrested for inciting violence if I do. Thanks for reading, have a great week.