Musings of the Madman: Early Look at Eldritch Moon

Welcome back all! Have any of you ever wanted to go to town...with a town? You'll have that opportunity thanks to Eldritch Moon's new "Meld" mechanic and one of my previewed cards. Eldritch Moon continues to drip with flavour and some iteration will find its way into our decks. There are three new mechanics in Eldritch Moon, but they are somewhat reminiscent of earlier such, so let's start with Meld!

Meld takes us all the way back to Mirage Block, where you could sacrifice an Urborg Panther, a Feral Shadow and a Breathstealer to bring out Spirit of the Night! Unlike the Spirit, however, melded cards become a large double-faced card! Functionality is as follows: Once you have both cards to meld on the battlefield, you exile them and they return to play as the double-faced card. If the new card is destroyed, you get "two-for-oned", and if it gets sent to your hand, both cards do so.

Meld has issues, however. In a limited setting, you're probably not getting all the meld parts you need. You might get cut off from some of the more powerful ones, or you just might never see them. While it's great there are checklist cards for meld, I really would have preferred that they produce a token for them, to avoid unsleeving and resleeving and flipping and... but that's unreasonable as they've not done so with any other flip cards. Lastly, the seeming ability to respond to the exile by just killing one part is disheartening. If, as with the Mirage version, you sacrificed them, you'd have a little more room to get there. Still, I look forward to seeing these in gameplay.

Emerge takes us back to Kamigawa Block, where we had the "offering" ability, allowing us to sacrifice an amount of creatures to play a creature of similar type for a much reduced cost. With Emerge, however, all the card cares about is the converted mana cost of the sacrificed card, so something with an Emerge cost of six will emerge for three if you sacrifice a Fleshbag Marauder. You will still need to pay any coloured costs the Emerge asks for, however. Here's a nice example. 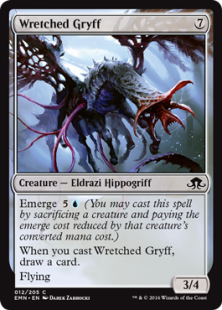 As we can see, it costs seven, but can potentially be reduced to a single blue if you sacrifice enough to make that happen. We don't have the full spoiler yet, but here's hoping some of these are solid enough for Commander play. There's generally a ton of value to be had in sacrificing your creatures, and the RC are discussing unbanning Protean Hulk internally so...

Let's get the "that escalated quickly" meme out of the way early so we can dive into this great mechanic. Reminescent of Kicker and Entwine while offering much more flexbility, Escalate makes your spell modal, for a price! That price might be a little generic mana, discarding cards or something else yet unknown! 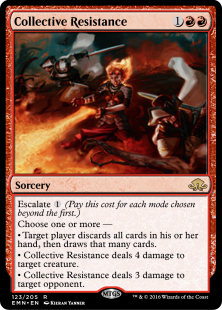 Now there's a spicy meatball! For three mana you can deal three to target opponent, have a player discard their hand and replace that same amount of cards or deal four to target creature. The Escalate cost is a single generic mana, so you can two for one for four mana. Need we remind you that only one player could benefit from the card draw? Asymmetrical card draw is so, so good. We should see some great limited tricks out of this mechanic too, to everyone's delight I'm sure.

That's it for this week. Join me next time as we examine a card that could be coming off the Commander Rules Committee's banned list!