For Those Times You Just Want Revenge!

Have you ever felt picked on by another player? As if they're targeting you specifically and policing your fun? Let's plan your revenge!

It happens. You're going to get attacked and your spells are going to get countered. But every now and again it seems like it's personal. If you want to listen to that little devil on your shoulder and kick it's angel counterpart into the trash, here are a few things you can try to get your cold dish of revenge!

I'll give you a few ideas on how to put together a deck that has one goal. Make one opponent's game miserable. Use this tactic with caution, however! This is best reserved for those extreme cases when a player consistently breaks his promises and is truly picking on you. If they don't deserve the freeze-out, YOU are the bully. Don't be the bully! It's all about fairly earned payback. 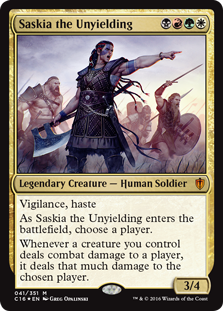 The Commander 2016 release has given us Saskia the Unyielding. The deck is called Open Hostility, for crying out loud! Let the hate flow through Saskia! But, we miss out on Blue. A key colour for bullying! 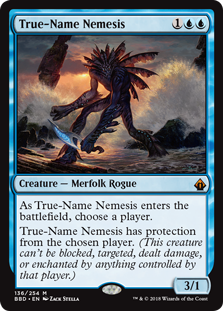 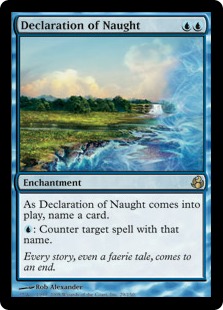 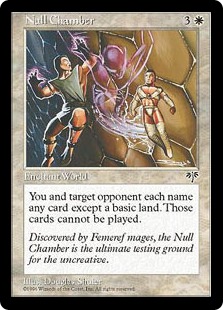 True-Name Nemesis comes to mind, but I think we can do better. Ultimately, you're going to get in for a bit of damage each turn, but I much prefer Declaration of Naught! Name their Commander, and lock 'em down! This works in White too, with Null Chamber. Sure, they can name your commander also, but in case you haven't figured it out, this deck is not about it's Commander synergy! 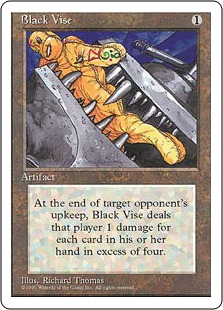 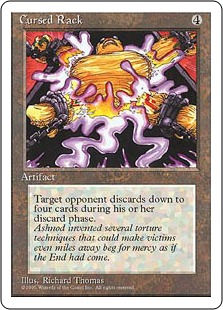 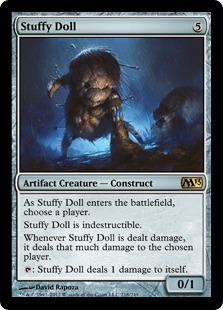 No matter what colours you end up brewing with, we can run Black Vise and Cursed Rack. I'm assuming your foe earned his mark of death partly by drawing so many dumb cards from his dumb deck! Here's a couple of artifacts that don't work together at all, but do a decent job at limiting their ability to cast spells, and have fun. Want to let others turn it into a dogpile? Stuffy Doll allows other opponents to join the dark side by attacking into it! 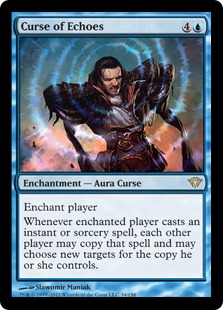 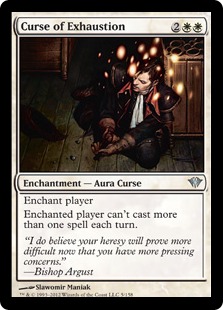 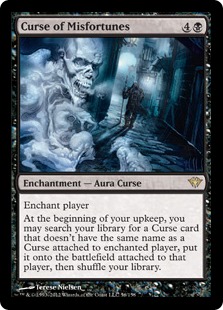 And the best card type to crush specific spirits are "Aura Curse" cards. Let's make them curse the turn (turns) (games) (Friday nights) they wronged us! Curse of Echoes guarantees everyone will have the same amount of fun, and more! Therefore, your arch-nemesis by definition is having the least fun! Curse of Exhaustion will also hamstring their ability to do much. It's also fun to lead with Curse of Misfortunes, so we can shower them in curses! 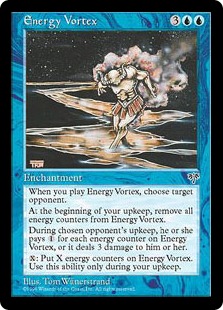 While "researching" this article, I came across Energy Vortex which might be the perfect card to put all your resources into ruining your victim. You can spend any mana not used in tightening your grip on their neck to punish them every turn. Another blue card. Who knew blue was the meanest colour? I would have expected black...

So when should you employ this tactic? Maybe never. I look at this deck as the equivalent of writing an angry e-mail saying everything you want to say but shouldn't, only you never hit send. (Don't put an address in the address line just incase. Trust me on this one.) I think it is absolutely possible to go too far and cross the line from "playful mischief" to "I'm quitting the group". Nobody wants that. I hope. Otherwise, why are you in that group? 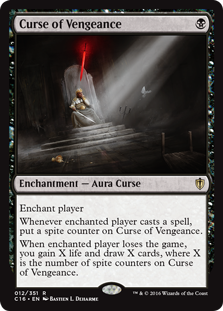 I know the feel-bads of having your fun stolen. If you do need to vent a little, just add one single card. Curse of Vengeance. Hopefully putting actual spite counters down will help you work through your feelings!